Saturday Was A Work Day

My morning started out with this.  I stepped outside to go to the woodshed and found this big hole dug by Olivia. 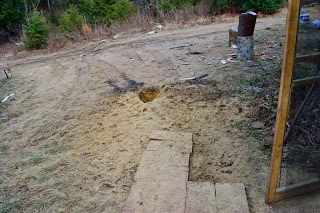 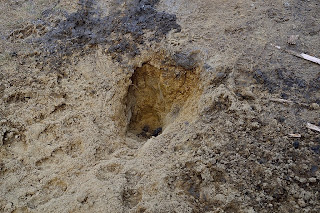 Then it was off to our property to cut firewood.  The lock to Todd the Trailer was frozen and I couldn't get in to get my log roller, gasoline, or two cycle oil.  I had left a bottle of pre-mixed gasoline and a bottle of chain lube outside so I could still cut a little wood, three chainsaw tank's worth. 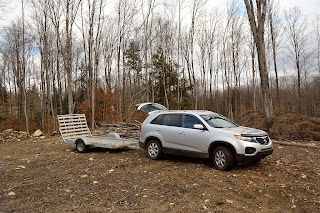 Ruby watched what we were doing with keen interest, and then decided to help.  She started dragging wood out of the woodpile. Olivia watched and thought it looked like fun. 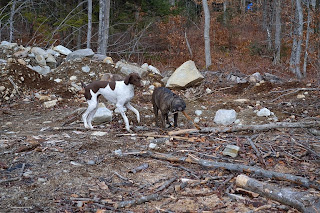 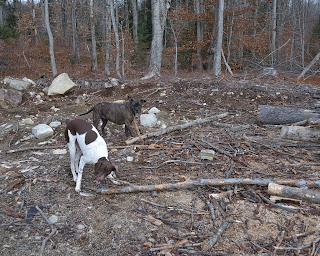 Back at the Unabomber Cabin, Pam split while I tried to fill the hole and stack split wood in the woodshed. 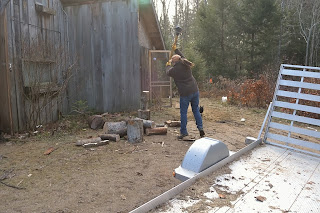 At one point, Pam said "Come look at this!" 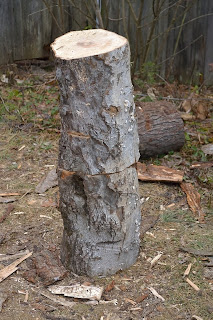 In the pic above, the log on the bottom is our splitting log.  It's been there for a couple of months, and we set logs to be split on it.  The top log I cut today.  It's a match.  Pam just happened to set it there just right.

Our dogs love to "help".  They watched me pick up the split wood and stack it in the woodshed.  Olivia and Ruby have a pile of their own going. 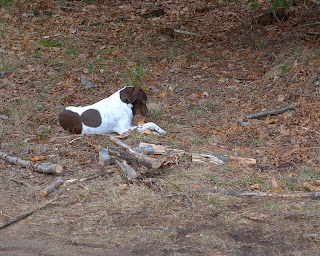 The bar on my chainsaw was so worn that I couldn't make a straight cut.  Earl had a bar off an old chainsaw that was the right size, but wouldn't fit.   Time to go to Earl's house.  The temps were now above freezing, so I stopped at Todd the Trailer, unlocked it, and fetched the butane lighter inside and placed it outside.  The next time I need to get in the trailer and the lock is frozen, I'll be able to thaw it out.  At Earl's, the master machinist, made the bar fit by milling the slot and drilling a new oil hole.

After a couple of victory beers with Earl, Pam came home after riding Jeremiah the Horse in a team sorting event.  They did well, coming in second.  Back home, it was dinner and a quiet evening of watching Breaking Bad on DVD, then to bed.

At 5 AM I was awakened by a ruckus downstairs.  Pam had left for work a half hour earlier. I tried to ignore it.   It was 5 AM, after all, but the noise seemed frantic, so I got up.  Sassy, our indoor cat, was outside in the 12 degree weather.  She was trying to get in the window that the animals made into a door.  I let her in, and then I heard meowing.  I opened the human door, and Leo came running in.   After I shut the door, Ruby and Chevy whined to go out, and so I let them.  In and out, in and out, in and out.   I feel like a doorman.

Does all this really have to happen at 5 AM?