We had cabin guests for an overnight while Zaida's apartment was flea bombed.  Zaida is Empress's mom.  Empress is also a pit bull, and all the pits had a ball playing.  Olivia, our pointer, not so much.  Olivia plays like a pit bull, but knows that Ruby and Chevy, being 80 pound dogs, can take her out at will.  Empress is maybe 40 pounds or so, and 60 pound Olivia often beat up on 40 pound Empress.

Empress is on the right in the photo below.  Ruby is in the middle, and Olivia is bird watching.  After all, she is a bird dog. 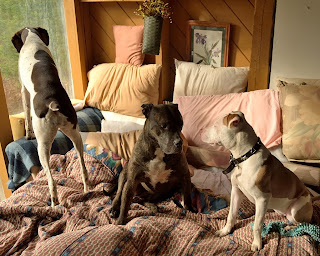 In the photo below, I'm giving Olivia a lecture about being nice to Empress. 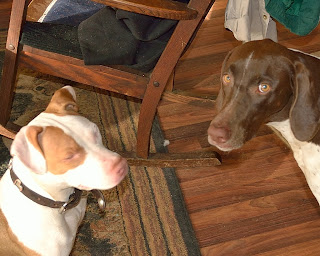 Last night, it was in the low 20s outside, but it we had the wood stove cranking and it kept it at 70 degrees inside.  The wood stove was aided by Christmas Tree scented candles and antique oil lamps.  It was very cozy. 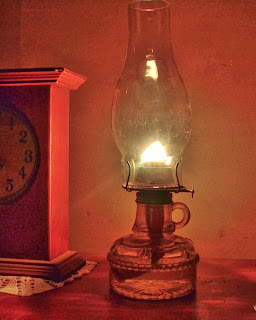 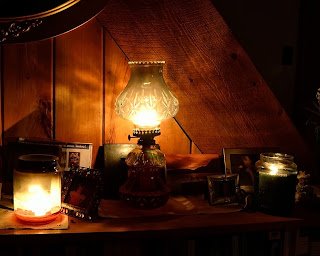 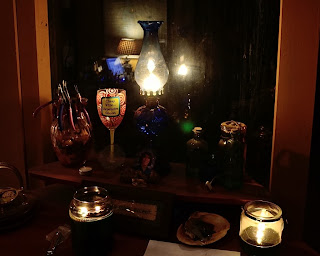 Many years ago, in the late 1970s, I installed a Vermont Castings Vigilant wood stove in our raised ranch in the suburbs of Saratoga Springs.  We used it to heat our house for many years.  We also had antique oil lamps and enjoyed the warmth and coziness of the flames.  We declared that Wednesday would be "energy conservation night" at our house.  No electricity.  No lights, no TV.  Home computers weren't invented yet and Al Gore hadn't invented the internet, so that was no problem, but still my young daughter was horrified.  No TV?

We opened the doors to our wood stove, and lit candles and oil lamps.  We played board games instead.  The first few weeks were tough on Becky, but eventually she came to enjoy it.  She invited her friend Monica over.  Monica didn't get it at first, but quickly came to enjoy it as well.  And then Jamie came over the following week.  Energy conservation night was a huge hit in the neighborhood.

If you have kids, or visiting grandkids, try having your own energy conservation nights.  Make the kids put down their smart phones, turn off their Kindles and iPads, and enjoy life as it was back a hundred years ago.  People didn't text, they talked.  They enjoyed each other's company.  There was no Angry Birds nor Tweeting.  There was Monopoly and Go Fish.

Sometimes I think that life was better in the old days.  Of course, that could just be my old-fartdom talking.