Last night was crystal clear, and with no moon there was no light pollution.  It was also warm, so I decided to play outside with my camera again.  Star trails are a series of 30 second photographs that are stacked on top of each other, giving a longer exposure.  I took eight photos, and so got four minutes of star trails.

As I was sitting at my laptop reviewing the photos and converting them from RAW to JPG, I noticed that I got a meteor. 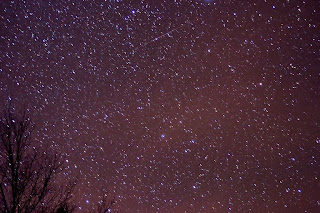 See it?   It's that thin straight line, top center.  That's the second time I've gotten a meteor.  Maybe next year I'll take the camera over to our property and shoot the Perseids meteor shower.  I won't post another's photo here, but here is a link to a great Perseid photo by David Kingham.  The Leonids are November 16, but there is a full moon so it might not be good for photography.

Unfortunately I was shooting north.  There were many reports of a big green fireball in the southern sky around 9:15 last night, right when I was out shooting.

I know you're all probably getting pretty bored with astrophotography, so I decided to play around with the star trails one and make it outrageous. 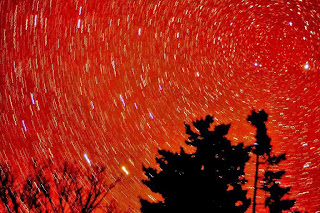 Naw, the sky was nowhere near that red.  All I could see was black, and a few bright stars.

Today will be busy.  Grandson Nate's 4th birthday party, and a fund raiser for Lilli Neahr-Mulford, who is a two year old with leukemia.  Sunday we may cut more firewood.  Busy busy busy.

Oh, I almost forgot to include these photos.  It's been raining a lot and the dogs are bored.  Olivia, the pointer, loves to sit on the couch and watch the birds out the window.  Chevy made the mistake of curling up for a nap in Olivia's spot.  Did that stop her?   Nope. 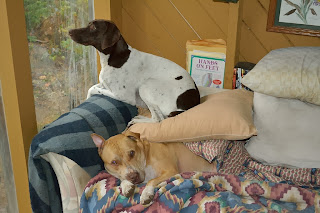 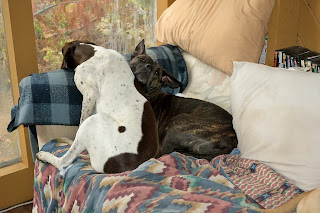 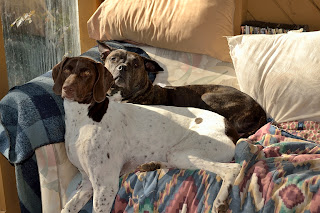