I generally dislike change.  Surprising to some, perhaps, since I'm a computer guy, but I like it when something works and it's left alone.  That would be Vrooman's Bar and Restaurant in nearby Caroga Lake, which has been in business since 1906.  That's really all I can tell you about it, and I only know that its been here since 1906 because it says so on the sign outside.  I can find no mention of Vrooman's with google other than restaurant reviews.

But I get the impression that not a whole lot has changed here over the years.   The inside, the outside, are reminiscent of an Adirondack hotel.  And look at how they decorate for Christmas! 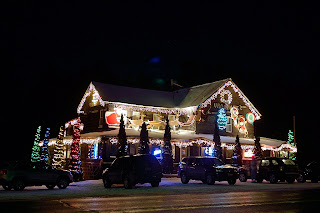 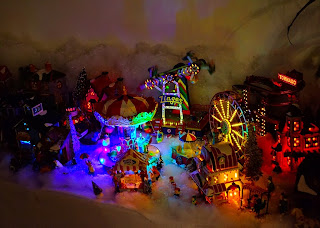 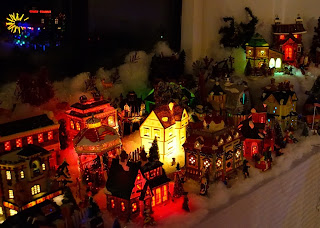 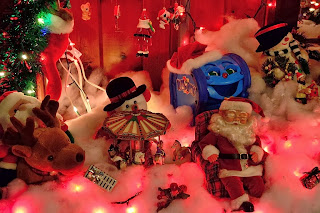 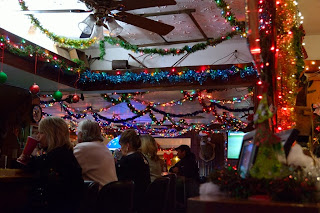 Awesome, isn't it?  Vrooman's has the BEST wings around, and we make it at point to go there every week or two for wings, beer/wine.

I'm nervous about the snow storm we got hit with Saturday and Sunday.  We've been getting an inch or two of lake effect snow from Lake Ontario everyday, which AWD the Kia runs right over, packing it down on the driveway.  But this is forecast to drop about a foot, perhaps more than AWD the Kia Sorrento can handle.  My way of plowing the Driveway of Death is with Bessie the Tractor, and Bessie didn't want to start.  However, I got Bessie running yesterday.

I drove off the mountain to Tractor Supply with a list of needed items; spark plus, dry gas, starting fluid, 7/8" spark plug socket, etc.  I picked up four Autolite 3116 spark plugs, but checked with customer service before leaving.   I couldn't remove the old spark plugs to see what was in there now because I didn't have a 7/8" spark plug socket.  They had a lot of reference books, and I thought I'd check to make sure I had the right plugs.  The guy at the desk pulled out his Autolite catalog, which said I needed part number 216.

OK, so I bought #216 and drove up the mountain.  I used my shiny new 7/8" socket to pull an old plug, which was fouled.  The new plug wasn't even close to being the right fit.  Back to my laptop and google, and back down the mountain to get a #386.

Back up the mountain, I installed four shiny new #386 plugs.  After some serious cranking, Bessie fired up!  Yes!  Time for a victory beer! 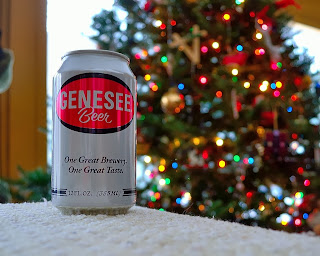 As of 3 AM today, Sunday, we probably have about a foot of new snow.  Hopefully Bessie the Tractor will start again, and hopefully, the gallon of hot water that I pour on the hydraulic lever that raises and lowers the plow will unfreeze.  Yes, the back plow is frozen in the down position.  That would be a problem plowing the steep Driveway of Death.

It is 17 degrees outside right now, and snowing heavily.  I guess I'll post this and go back to bed, while I still have internet.  I'm surprised that our satellite internet is still working with the satellite dish covered in snow.