I mentioned before that I'm night blind.  I always have been, but having a detached retina that took half my vision from my left eye makes me as blind as a bat at night.   No wait, bats can "see" at night.  I take that back.  I'm as blind as... as... something that can't see.  You know what I mean.

It is rare that I can see any stars at night except for the very brightest.  Living in Bleecker, New York, in the woods, there is no light pollution.  This would be a great place for an observatory.   Well, I was up at 5:30 AM and Ruby was whining at the door.  I let her out to go potty and I was amazed at all the stars I could see.  I also noticed many stars last night, and I took a series of pics for star trails.  My camera really doesn't process fast enough to take star trails.  I take a 30 second exposure, and then the camera takes 30 seconds to process the data, so I get gaps.  When I stack the photos, the gaps are distracting.  See? 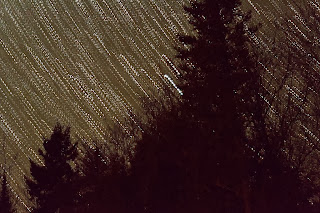 However, one of the photos captured a meteor, which I think is very cool. 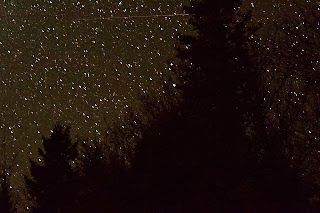 You can see it at the top of the pic, right in the middle.  The stars are football shaped because of the 30 second exposure.

Pam and I did some running around, part of which included stopping at a tack shop in Saratoga Springs.  I don't know anything about horse gear, so Pam showed me what she wanted for Christmas.  I bought the stuff after admonishing her to not look.   Arriving at home with the bag, and a box from Amazon, Mr. Leo Pard decided he needed to check it all out.  First he sat in the Amazon box, and then climbed in the shopping bag. 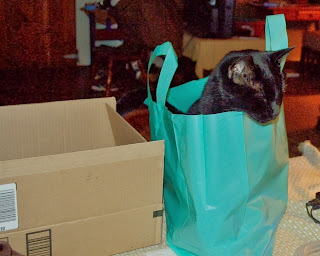 I wonder why cats do this?