Our only source of heat is firewood.  We don't have a gas or oil furnace, nor electric heat.  Wood it is.

We had a good supply of firewood, but with the extreme cold we had in November and December, we realized that we would run out before we left for Florida.  At the beginning of December, we ordered a full cord of seasoned wood from the local Bleecker business R&R Firewood for $240.  We stacked most of it in the woodshed attached to our Unabomber Cabin, and the rest went outside, covered with a tarp.  Well, we've gotten to the point where the woodshed wood is gone, and it's time to burn the outside wood.

I don't care how good you tarp your outside wood, it's going to get wet from rain, from snow,  and from frost.  So what to do to burn it?  Bring it inside and dry it by the wood stove. 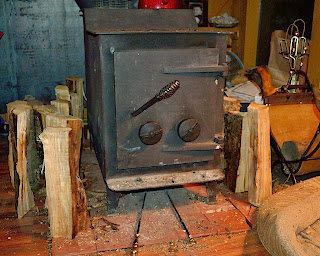 Yep, we bring in the next day's supply of wood the day before to dry it out so we can burn it.  Seems odd, I know, but it works.  During the day, we turn and rotate the pieces so they dry thoroughly.  By the next day, the wood is dry enough to burn.

Pam and I moved the wood from outside to the inside of the woodshed.  Even though it's wet, it might dry a bit under good cover.  This is where it was... 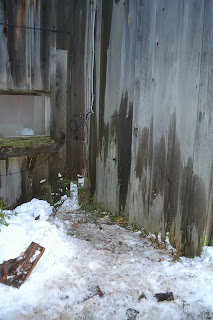 and this is where it is. 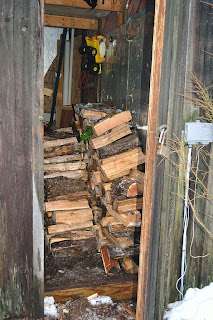 Barring a really cold spell, that should last us until we head south.

In other news, the creek by the cabin is still running high... 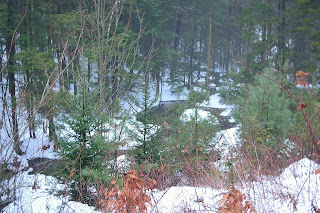 and the critters have a bit of cabin fever. 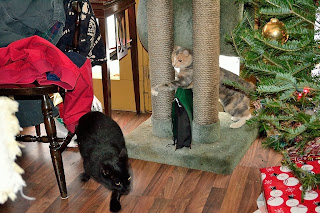 Sassy, the small female cat, has been attacking Leo Pard, the big black male cat, on a regular basis.  Leo, on the other hand, spends much of his time outdoors.  He even plays with the dogs.  While the dogs wrestle in the snow, rolling each other over, Leo watches for any opportunity to join in.  He sits close by, taunting the dogs to chase him, which eventually one of them does, and he arches his back and hisses and then scampers away.  These are strange cat and dog games.  I wonder what reindeer games involve?