Dashing Through The Snow

We got another half a foot of snow yesterday.  Not your normal low pressure snow, but lake effect snow from Lake Ontario.  Not too far to the west of us is Boonville, whose nickname is "the snow capital of the east".  They really get hammered with snow every winter, and it often extends to Bleecker. 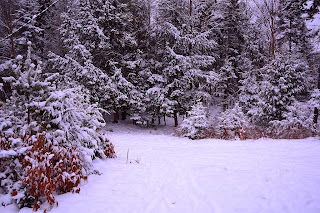 Regardless, Jeremiah the Horse was out of hay, so off we went with Audrey the AWD Kia Sorrento towing the flatbed trailer.  The roads were very bad, and our top speed was 32 MPH, with the trailer trying to push us around.  It took about an hour to make what is normally a 20 minute drive.   We fetched 20 bales of hay, covered it with tarps, and then drove up the mountain and into Earl's unplowed driveway.  It was covered in six inches of snow on top of ice.  We got stuck in no time.  We unloaded the hay into the horse trailer, unhooked the trailer, and I was able to get the Kia unstuck by locking the differential.

I love this car.  I can only imagine how good it would be in snow with snow tires.

Yes, when we got home from our three hour hay fetching errand, we both enjoyed a victory beer.
Posted by Dave Gibson at 8:47 AM