A Walk In The Woods

My old buddy Bob Mayo turned me onto Bill Bryson's book A Walk In The Woods, which is actually more than a walk.  It was about hiking the Appalachian Trail.  I enjoyed the book for many reasons.  It's very well written, very witty, and it's about walking in the woods.

I've always loved the outdoors.  As a kid, I spent all the time I could outdoors, often walking in the woods.  If my friends wanted to come, fine.  If not, I went alone.  I even remember going sleigh riding at night on the hill behind the houses at Swayze Acres in Waterford.  I was almost always the only kid out there.  If it was snowing, I'd sometimes run my sled into the bushes and just lay there, looking up at the snow gently falling.

Pam took Jeremiah the Horse and went to team sorting on Saturday.  Pam enjoys it, and Jeremiah figured it out very quickly.   The idea is to separate calves from the herd in numerical order and run them out a gate.  The calves are numbered 1 through 10.   For example, if you're given number 6 by the starter, then you run them out 6, 7, 8, 9,10, 1, 2, 3, 4, 5.  If they go out of order, you're done.  At this point, Pam says she just points Jeremiah at the calf she wants and Jeremiah does the rest.  I suggested that she buy a laser pointer to help.

While I was sitting at the laptop, I heard Olivia the Pointer bark at something outside, and then she gave chase to it and her barking grew fainter and fainter.  Chevy was with Olivia, and he gets lost easily.  I put on my boots and hat and coat, grabbed my camera, and Ruby and I went out to find them.

Chevy actually came fairly quickly, but not Olivia.  I called and called, but she didn't come and I couldn't hear her barking.  The snow was falling softly.  The kind of a gentle snowfall that you can hear.

This pic below is on the north side of the Unabomber Cabin.  We think deer might bed down here.  Olivia barks over here a lot, but there was no sign of her. 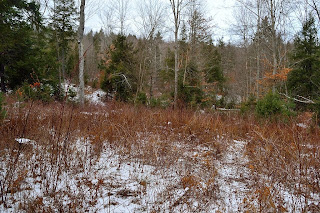 I suspect deer bed here too, under the pine trees. 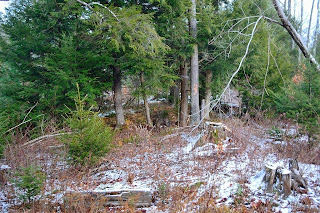 The back of the cabin. 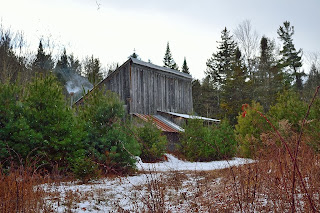 We finally found Olivia in the opposite direction of where we were looking.  Of course. 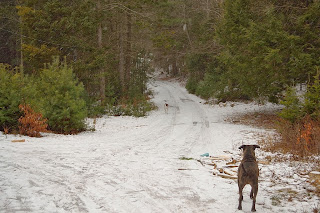 It was so nice out, we all decided to take a little walk in the woods.  This stream (behind Ruby) is just down the hill from the cabin. 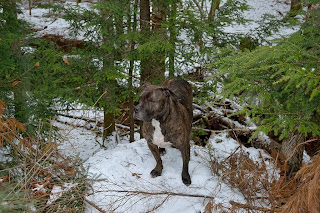 The south side of the cabin.  This was all overgrown with scrub pines when we moved in.  I cleared it to get some sun and a view. 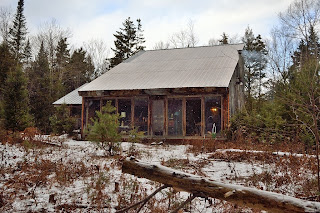 The dogs were enjoying the outdoors so much that I lost them all.  I called and called, and it took about an hour to get them all back.   And then they wanted to stay outside an play with sticks.  There is nothing a pit bull likes better than playing with sticks. 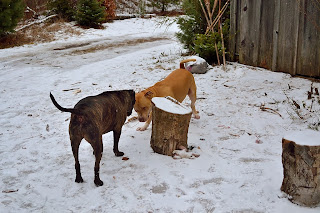 So how did Pam do at team sorting?  Well... Pamela is mathematically challenged.  She and her partner were given the number 9, meaning that was the calf they were to start with.   Her partner went first and run out number 9.   Pam rode in and chased out number 8, and then pointed and said to her partner "There's number 7!".

Her mind is on other things.

We intended to go to Vrooman's for wings and beer last night, but it was snowing so hard that we couldn't see the road and so turned around and went back home.  We were only gone a few minutes, but the snow completely covered our track in the Driveway of Death.  This wasn't a forecasted snowfall.  This was lake effect snow from Lake Ontario, which is 100 miles to the west of Bleecker.  Until the Great Lakes freeze over, moisture is picked up, frozen, and dumped on upstate New York.  The Tug Hill Plateau, a bit west of us, gets record amounts of snow.  It is famous for its snow.  It also has miles of snow mobile trails and is a snow mobiler's paradise.  They can have it.  All I wanted was wings and beer.