Ruby and Chevy are Connecticut pit bulls.  Although it didn't snow in Stamford like it does here in upstate New York, it did snow.  As a matter of fact, our last winter in Stamford, while living aboard our boat, we had record snowfalls.  The dogs loved it, and loved playing in it, especially when we had big snowstorms.

Not so Olivia, the German Shorthaired Pointer we got in Savannah.  Olivia has been a Georgia dog all her life.  She shakes and chatters her teeth when it gets down to the 50s.  Well, yesterday morning we awoke to a very pretty dusting of snow.  It covered the ground as snow flakes gently floated down through the trees around our cabin.  Olivia not only took it in stride, but seemed to be friskier than normal. 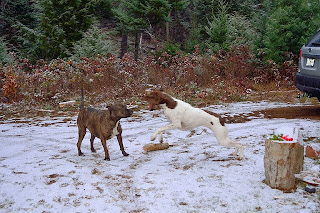 Ruby wasn't too impressed with the little bit of snow we had.  Chevy was downright annoyed by it, and turned around and went back inside our unabomber cabin.  But Olivia decided to go nuts and started running all over the place, and then decided to wrestle Ruby to the ground  and roll her in this funny white stuff.

That didn't work for Olivia, of course.  Look in the pic above.  Although Olivia towers over Ruby, as she would over even other pointers because she's huge for a female German Shorthaired Pointer, Ruby outweighs her and has a much lower center of gravity.  Ruby also grew up in an off leash dog park in Norwalk, Connecticut called Taylor Farms.  Ruby has wrestled and held her own with dogs much, much bigger than she is.  No dog rolls Ruby unless she allows it.  Not even Chevy, who is a male pit bull as large as Ruby.  Ruby is the black belt karate kid of dog wrestlers and body slammed Olivia real good.  But Olivia took it in stride, and ran off to play in this strange white stuff.

We'll have much more of it coming, and soon, I'm afraid.  The status of the motor home that we bought to escape to Florida is up in the air.  We've been pestering the place that's supposed to fix it, Frank's Heavy Duty in Amsterdam.  They're replacing the master cylinder, repairing the flat, and inspecting it.  We also just lost all the lights on the horse trailer that we're towing Jeremiah to Florida in and so that's going to Frank's HD as well.

The brakes on the old Buick we got for a Florida car are locked up, and it's in another garage in Amsterdam as well.  All this is reminiscent of my time on boats, throwing thousands of  dollars to mechanics.

Hey kids!  Don't want to go to college?  Go to a trade school and learn to fix stuff!   Trust me, you'll always have a job, as long as I keep buying stuff.