It's time to pull the ol' soap box out, put it on the busiest street corner in downtown Bleecker, and promote an organization near and dear to my heart.   The Boys & Girls Clubs of America.

Pam and I had a wonderful time at a local Boys & Girls Club fundraiser "Share the Spirits", a wine and hors d'oruvres event, held at the Holiday Inn in nearby Johnstown.    The wines that I sampled were awesome (except one muscato), the snacks were top shelf, and I "won" a finger painting at the auction, made by the kids. 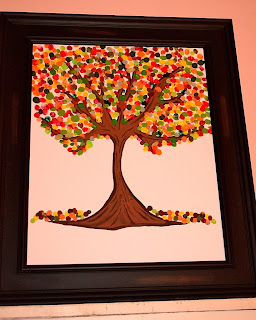 Pam loved this.  It was a group project called "Unique" and taught the kids that while we're all similar, each one of us is unique.  Each child had a certain color fingerpaint and added his or her print to the tree.  On the back side of the painting is a color code with each child's first name.  Pam and I were the ones who kickstarted a movement to bring this club to Gloversville, and it was immensely gratifying to see it still running under the very capable leadership of local folks, benefiting area boys and girls.

It a was wonderful event, and I got to visit with many of my old friends and make new ones as well.

Notably absent were the local Gloversville politicians.  What better way to show support for this important organization in the city, which now has two outlets, one at Dubois Apartments and the second at Park Terrace Schools.  And maybe even garner some voter support.

Ah, whatever.  But a note to my Fulton County friends.  Bonas Discount Liquor was not only one of dozens of area businesses to support the Boys & Girls Club with donations, but were a major sponsor, providing all the wines for sampling.  In return, please support Bonas by patronizing them for all of your booze needs.  Thank you.

Let me tell you a little about the Boys & Girls Clubs and what they do, and don't do.  First, what they don't do.  They don't charge much.  They charge a pittance for the kids to participate.  When I was involved with the clubs five or six years ago, the cost per kid was something like $7 in annual dues.  Those kids that don't have the dues aren't turned away, but handed a broom to push or a few windows to wash to earn their way.

What they do do (tee hee, I said doo doo), is provide a safe, nurturing, positive place for kids to be.  Rather than grabbing a can of spray paint and heading for your neighborhood after school, club kids head to the club, where both paid and volunteer adults supervise them in fun activities.  No seriously, fun stuff.  Like participating in events, such as an antique and classic car show held to support them every year, or family fun days such as the local Railfest, or perhaps even some mundane stuff like making melted crayon art.

Every Boys & Girls Club chapter can tell you stories from their kids who profess that their lives were changed, or even saved, by his or her club.  Instead of getting into kid trouble, or worse, the Boys & Girls Clubs give our children positive options.  One notable club supporter is Denzel Washington, who was quoted at a recent gathering to support the Boys & Girls Clubs... “You will never see a U-Haul behind a hearse,” the Oscar winner said. “Whatever you've acquired in this life, you can’t take it with you. The Egyptians tried that. They got robbed.”

If you have a Boys & Girls Club near you, get involved either by joining its board of managers, or at least by attending their fund raising events.  If you don't have a club nearby, call your closest Boys & Girls Club to find out how to get a chapter started in your community.  That's exactly what Pam and I did many years ago, and we worked for over a year to get a chapter in Gloversville.  It's happened, and it's working. I have the finger paint tree to prove it.
Posted by Dave Gibson at 7:44 AM