Caterpillars are the larval form of various moths and flutter-bys... I mean butterflies.  The woolly bear caterpillar becomes a Tiger Moth.  Science has shown that the size of the brown band between the black ends determines the severity of the coming winter.  Using precise measuring instruments, scientists precisely measure the brown stripe.  A large brown stripe portends a mid winter to come, while a short stripe means a severe winter.

Fun fact - woolly bear caterpillars freeze solid in the wintertime.  They become moths when they thaw out in the spring.

Chevy was fascinated by this woolly bear.  That's his nose in the pic below. 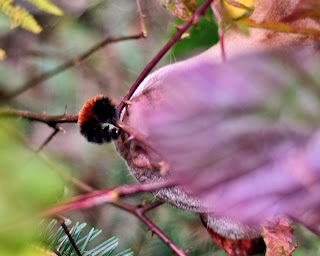 The woolly bear was only mildly interested in Chevy.