About 30 years ago, I set the alarm on my boat for the wee hours to see a lunar eclipse.  I was anchored out on the Great Sacandaga, far from any light pollution.  I wasn't disappointed as I shoved the hatch back, being witness to a huge reddish colored moon overhead.  I didn't have decent photography equipment back then, so I was looking forward to last night's lunar eclipse.  I was even supposed to peak at a decent hour, 7:50 PM.

I took the camera and tripod outside, took a few practice shots to set everything up, and took the following photo. 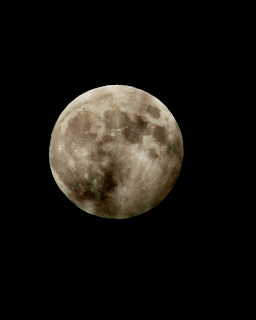 To my naked eye, it didn't look any different from any other moon, as bright as ever.  But toning it in my photo editing software, I could make out the dark shadows at the moon's southern end.  Still, not very dramatic.

I'm still limited in my activities due to my accident of getting whacked by a tree.  Most of my day is spent sitting at this laptop.  I've gotten bored enough to even argue politics on Facebook, something I once vowed I would never do.  But I've also started listening to records.  Yes, records.  Those flat black vinyl things that came before cassette tapes. 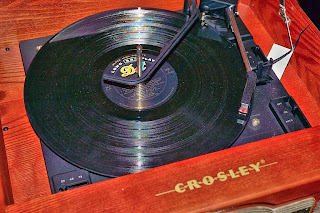 I played many of my records;  Cat Stevens, Jim Croce, the Beatles, the Doors, the Rolling Stones.  Then I opened another box.  It was records that were my mom and dad's.  Records I hated as a teenager.  I played a Billy Vaughn record.  Not bad.  Pretty good, actually.  It's all instrumentals.  For you kids out there, an instrumental is a recording of only instruments, no singing.  Yes, there were bands that didn't include singers, believe it or not, and Billy Vaughn was the biggest selling band of all time.  Then  I played a Great Instrumental Hits record that contained tunes from many bands.  Some I even recognized from pop radio, like Telestar by the Tornadoes and Dueling Banjos by Eric Weissberg.

Maybe it's my age, but I'm liking it.  These guys were good.  I just fished out an LP (long play, for you kids) by James Last titled el condor pasa.  According to Wikipedia, Last is a German composer and band leader.  What caught my eye on this one is that it's still got its plastic wrapper on.  It retailed for $4.98, but J.M. Fields had it on sale for price "E".  I don't know what price E is.

So far, I'm not liking James Last.  It's all cover tunes, like Cecilia, Blowin' In The Wind, Proud Mary, etc.   If you can't do it at least as good as the original, you shouldn't do it.  But I will give it a shot and let this side of the record finish before putting it back and finding something else,  just so I can say I'm open minded.