I'm night blind.  I don't see much of anything outdoors at night.  Well, or indoors too, for that matter. So it might seem odd that I'm really enjoying astrophotography.   The reason is that I can't see what I'm photographing at the time, but I can see it once I download the photos on my laptop.  Such was the case last night.

The first photo was pretty funny, actually.  I thought I was shooting the milky way, but it turned out to be clouds.  The photo was still pretty cool, though.  The ten second exposure made the clouds seem wispy. 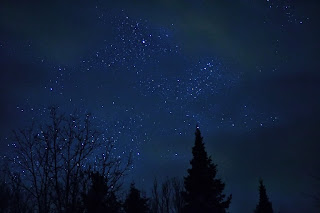 The next photo is actually five 30 second photos stacked on top of each other.  I pointed the camera in a northerly direction, and it was only dumb luck that I actually got the north star. 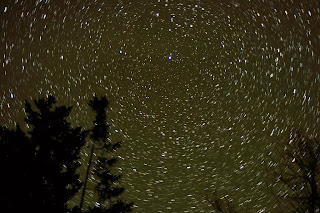 I would have stayed outside longer and taken more shots to get longer star trails, but it was in the 30s and very chilly outside.  I'd really like to get an hour or so of star trails.  Maybe if I get a wireless remote for the shutter, so I can stay inside the cabin and click it.  Or, wait until next summer.