I Thought Living In The Woods Was Peaceful

Pam  has been busy, working her part time job at Price Chopper and officiating at high school volley ball games besides taking care of Jeremiah and doing all the household chores, so life for her has been pretty hectic.  Not so much for me.   I just sit on my duff all day.  The most I can do is the dishes, which is made somewhat difficult because of the neck brace.  I can't look down to see what I'm washing, so I just do it by feel mostly, holding up each piece to inspect it before placing it in the rack.

Only fifteen more days until we go to the doctor.  Hopefully, he will let me take this damned thing off.

By the way, I've been very vocal on various message boards, newspaper comment sections, and Facebook about healthcare reform.  Not because of my situation, although I can now relate to the problems with first hand experience, but because I've recognized the need to fix things for years.  Apparently, I made so much noise that I attracted the attention of our local newspaper, and they featured my situation in an article they wrote about health insurance.  You can read Health Insurance Exchanges Start in New York online.

Here's a pic of me snuggling with Sassy the Cat.  At the time, I wasn't sure if I had Sassy or some animal that may have wandered in the cabin.  I knew it wasn't a porcupine.

You may have noticed the beard.  I haven't shaved since August 27th.  I thought about shaving in between changing braces to take a shower.  I have a plastic waterproof brace that I use.  But the beard acts as a cushion of sorts, and this piece of crap $500 neck brace needs a lot of padding.  It is very poorly made with many sharp edges and ill fitting stick on velcro pads that move. 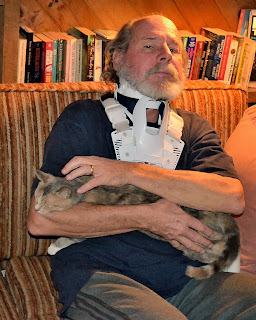 Sassy is a skittish cat and doesn't like to be held.  The only reason I'm holding Sassy at all is because she's "in season".  Like a ten dollar hooker on a busy street corner, the little slut struts all around the house, calling to anyone who will listen that she's open to offers.  She slides along the floor on her belly with her little butt in the air, shaking it at whomever is around.  Leo, our male, is fixed and totally not interested.  The dogs look at her curiously and wonder what's wrong with her.

It's bad enough when Sassy carries on during the daytime, but she also does this in the middle of the night.  Several times during the night.  If I make the  mistake of rolling over, Sassy takes that as a sign of some sort and starts her yowling routine.  She serenades anything remotely resembling a male cat, like the stairs or my foot, and tries to "snuggle", if you know what I mean.

According to the experts, and by that I mean random postings I've found on the internet, this can go on for two or three weeks.  We've GOT to get her "fixed".

It's 33 degrees right now at 5:30 AM.  The wood stove is doing a good job of keeping up.  It's 73 in the cabin.  Not bad considering that the wood stove isn't air tight, and neither is the cabin.

Sassy has stopped yowling, but now the coyotes are.  Luckily, they're not too close and the dogs are sleeping through it.  If they wake up, I'll have the coyotes, the dogs, and a cat in heat all clamoring for attention.  I thought living in the woods was supposed to be peaceful.