Many of you know that Pam and I bought an old trawler, fixed it up so it worked, and cruised down the eastern seaboard for a bit.  Now, we've bought an old motorhome and named it "the Boat" since it makes sense to the dogs.  They understand boat commands, such as "get on the boat".

I've already been doing some "boat projects".   There was a water leak from our pressure water system.  It was collecting in an outside compartment on the starboard (passenger) side.  I checked the obvious place, the pipes running at the top of the compartment.  They were dry.  I then crawled under the motorhome and followed the trail.  It was coming from the aft port side compartment where the unused water tank is, and where much of the plumbing is.  It was a hard plastic valve used to drain the cold water lines.

Now, I know from my boating days that its OK to use copper or PVC pipe in some circumstances, like long straight runs, but not for going through walls or for bends.  Vibration will crack the pipe, or in this case, the plastic valve.  I hied myself to the local hardware store and bought some new hose, a ball valve, and some pipe thread to barbed fittings.  A good marine solution.

The next project was to remove the Reese hitch extension stuck in the Reese hitch.  I was worried that it would act like a battering ram in a backing up situation.  Earl and I tried penetrating oil, a propane torch, and a come-along to my Kia's hitch to pull it out.   It wouldn't budge.  It  was rusted solid.

Earl got Denny from next door.  Denny has a huge shop full of serious tools for working on his many car projects.  Denny brought his truck over, put a chain come along on it, and heated it up with that rig you can see in the background. 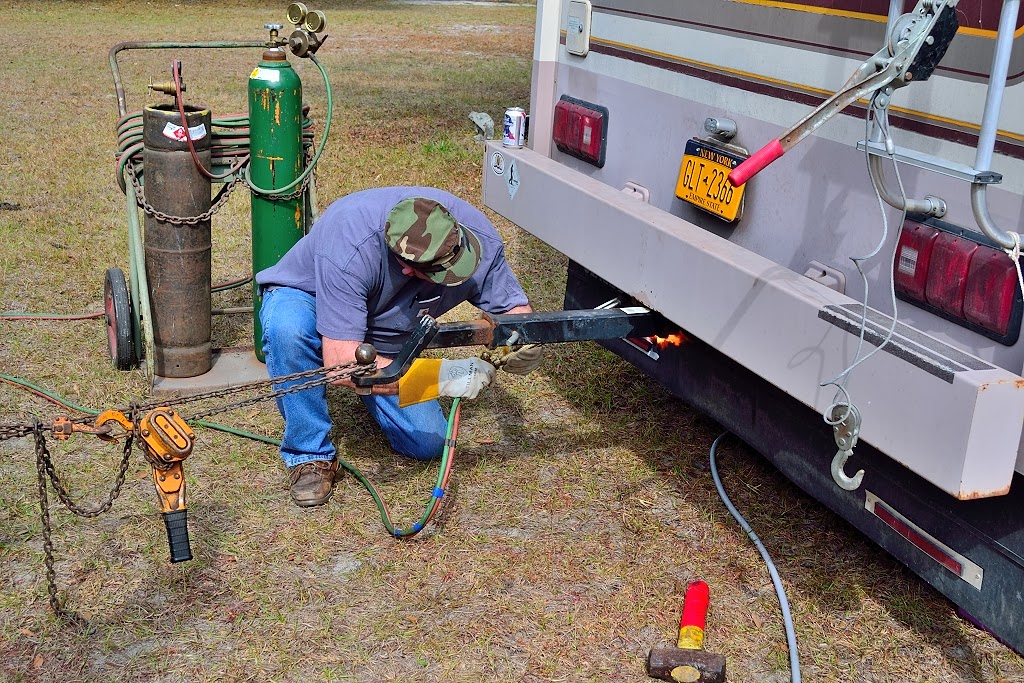 When he declared it was ready, I whaled on it with a sledge hammer.  After a half dozen whacks, it popped out.  I'll sand it smooth and grease it up before putting it back in, saying that I ever tow a trailer with "the Boat".

My next sunny day project will be to find and fix the water heater.  It's kind of a drag having to heat up water on the stove to wash dishes.  We'd also be able to shower in the RV, a plus.  Maybe Friday.  The forecast for  tomorrow is a high of 54 and rainy.   While that's warmer than today's 43, its still too cold.   What's that?  Hey, we're in Florida!  Might as well take advantage of it.   Friday, it will be sunny and in the 70s.