We left Friday from Bleecker. While Pam and Megan loaded up the cars, I busied myself with draining the plumbing and winterizing the pump and drains. I think I got the better of the deal. 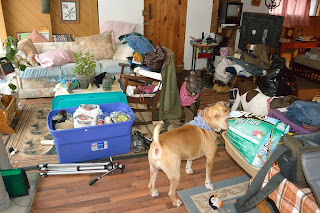 Pam and Megan left before I did to pick up Jeremiah the Horse. We would meet at Alpin Haus in Amsterdam, where the motorhome was.

Finished with winterizing, I grabbed my laptop, camera, and a couple of other things and locked up the cabin. I felt funny locking it. We didn't lock the doors for the whole time we were there.

Driving down the mountain, I almost stuffed the Buick into a guard rail, moving over for a plow that was taking up more than half the road. Plow? Well, yes. It was snowing, of course. And when I moved over, I moved out of the tracks in the road into slush, and the Buick skidded a bit. Luckily, I drive like an old lady and was only going about 25 MPH at the time.

I arrived at Alpin Haus before Pam and Megan. I loaded up my things and moved the motorhome to the propane station to top off the tank. Pam and Megan arrived shortly thereafter. We didn't properly stow things. We pretty much just dumped them wherever they would fit. Like cat litter in the bathtub. 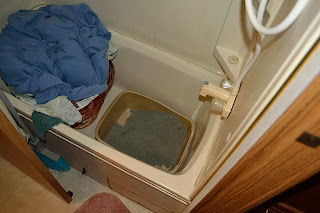 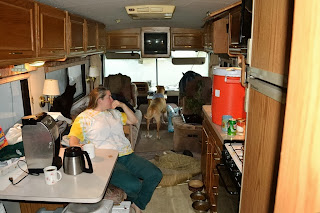 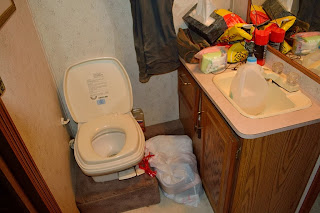 We left Alpin Haus in Amsterdam NY around 1, arrived in PA late in the afternoon. A nice, short day for the first one.

The next day, we drove through dense fog and rain, which slowed us down to 40 MPH at times. 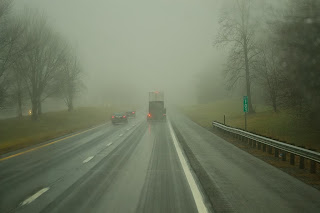 When the fog lifted and the rain stopped, we started making better time. That's Jeremiah's horse trailer in the pic. 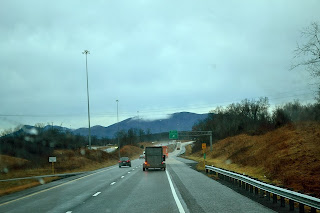 It was an 8 hour day for poor Jeremiah the Horse. We spent a couple of days at Lazy Acres in Lexington, VA to let him recover.   The other critters had to recover too. 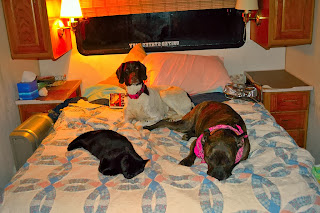 The next morning, I was amused to find Leo Pard licking condensation off the windshield  so  he could see out. 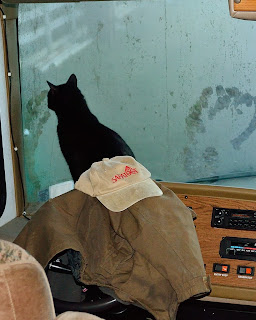 Jeremiah, kicking up his heels and LOVING Lazy Acres! 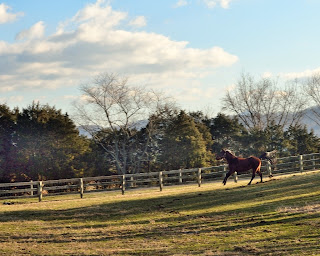 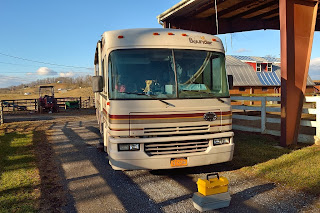 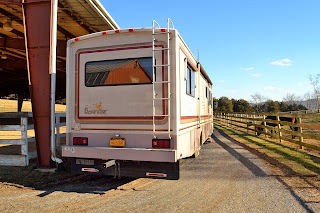 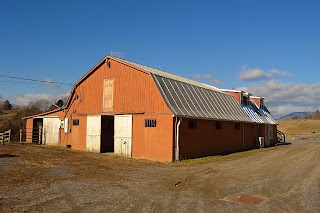 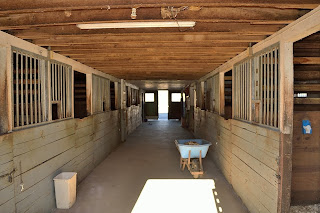 These two cabins  are available to rent.   They have beautiful views. 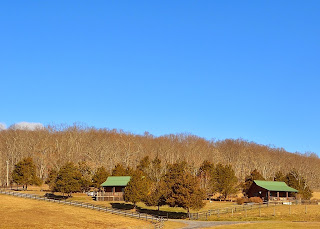 We're now in Troutman NC at a nice horse farm called Pomolos. Tomorrow to Lakeview Plantation in Fairfax South Carolina where we'll stay for a couple of days so Pam and Jeremiah can do some needed trail riding.

We're trying to minimize the hours on the road to lessen the stress on Jeremiah.  He doesn't seem to be too fond of traveling.  He actually broke away from Pam tonight to go say hello to a couple of Palominos.  He's very strong willed.  And strong.

The motorhome isn't bad to drive except in strong crosswinds. Then, its a real handful. The only thing to do is to slow down. I thought I was done checking on the weather when we traded cruising on our trawler for the motorhome, but not so. I still need to check the wind forecast.

I'll post another update as soon as we have wifi again.