I really like night photography and shooting the stars.  It's probably because I can't see them with my own eyeballs.  I'm night blind.  But I can see them on my computer screen.

Last night, we were supposed to be treated to the Quadrantid meteor shower.  There was supposed to be up to 80 meteors per hour.  Great!  It was well below zero here, shortening my camera's battery life to a bit over a half an hour, but that would be maybe 40 meteors!

I set up the camera on my tripod and attached the remote shutter release.  This was the first set of photos.  In the first photo, which was number 60 out of 68, you can barely see one meteor, a very faint streak of light.  You can also see one airplane.  That would be the line with the light blips. 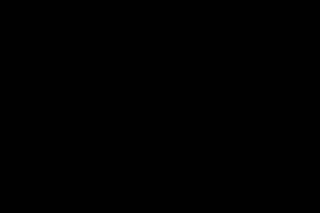 Still, I stacked the 68 together for a star trails composite.  Kinda cool. 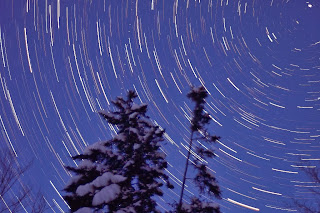 Disappointed but not discouraged, I put a new battery in the camera and set it out again.  Instead of north, I pointed the camera more to the north east where the meteors were supposed to be more  numerous. 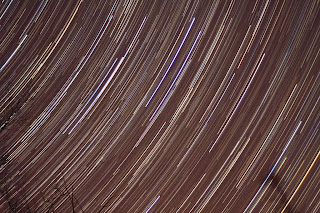 90 photos, no meteors.  And a boring composite to boot.  It was getting brutally cold out, but I gave it one more shot, this time more east. 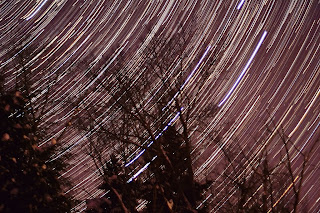 Not one single meteor.   Zilch.  Nada.  It seems I get more meteors when I'm not trying, than when I do.

As of 7:37 AM, it is -6 degrees in Gloversville, so at least that cold here.  I ran the kerosene heater in the pump room all night, which warmed that up to a toasty 47 degrees.   The pipes didn't freeze.  I think we're getting the hang of things here in the Unabomber Cabin.
Posted by Dave Gibson at 7:42 AM