Goats and the City Boy

Well, OK.  I'm not really a city boy.  I'm a suburb boy.  But still, I know little about animals.

I grew up with a cat, and at one point had a hamster.  That's it.  And then AP (After Pamela) we acquired Ruby the Pitbull, then Chevy the Pitbull, then a couple of cats, and then Olivia the German Shorthaired Pointer, and then Jeremiah the Horse, and now Amos and Andy the goats.

Goats are funny.  When we got them a couple of days ago, they were terrified.  Judi (Pam's mom) unloaded them from her car to a dog kennel, and then Pam and I fetched them to our property next door.  Pam had to carry Andy because he would not be led on a leash, and I had to push Amos to get him to move.  Now, they follow Pamela like puppy dogs.  Not only do they follow her,  but if they can't see her, they blatt loudly in protest. 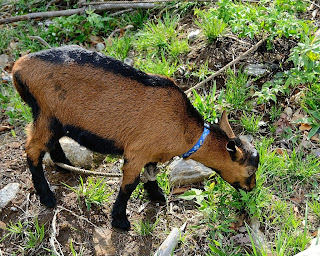 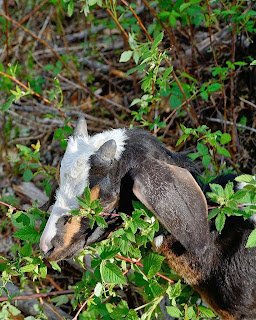 And this is our critters sorting things out.  Jeremiah the Horse doesn't like the goats and went after them.  Ruby, the overly protective momma pitbull, barked and protested loudly. 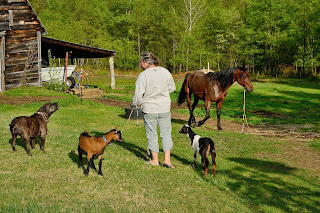 Ruby has adopted the young goats as her own, and I feel sorry for anything that threatens Amos or Andy.  Ruby will kick their butt, including a 1,200 pound horse.  These are now Ruby's goats.