It was a long, tiring drive for me.  Harvey the RV handles like crap.  Up to 55 he's tolerable.  60 MPH and its a bit tough, especially on rough roads (hello Pennsylvania, the crap roads capitol of the country).  65 MPH is total white knuckle driving.  I did no sight seeing on the entire trip.  My eyes were glued to the highway.

But still, it was nice once we got to our destination.  We arrived at Windy Ridge Farms in Bethel Pennsylvania in daylight, which was nice.  Judy always treats us to a home cooked meal, which is greatly appreciated.

The next day was the worst of all.  We drove I-81 in Pennsylvania.  Pennsylvania has the absolute worst roads in the nation.  Harvey was all over the road.  And it was a seven hour trip!   By the time we got to Bleecker, I was whooped.  All I could do was sit and drink beer.

I know, I know.  You're thinking "But Dave, that's all you do anyway!"

Not true.  Sometimes I stand and drink beer.

I needed to get to the cabin to turn on the electricity and water, but I was too tired to move.  I made an executive decision to spend the night in the RV at Earl and Judy's house.  Monday morning I'd go to the cabin to get it going.

Pam decided to drive the mile down the road to check it out and to deposit the cats for rodent extermination.  She returned to report that all was well.

Monday morning, I reluctantly arose, ate breakfast, and then Pam and I, and the dogs drove to the cabin.  I flipped on the power, except for the electric hot water heater, and primed the pump to get water flowing.  This process takes a bit of time, but an hour later it was done.  In the meanwhile, Pam was out in the woods looking for signs of  Sasquatch.  She was not disappointed.  She saw many bent trees weighed down by logs and other trees, and even found a faint footprint in the creek by the cabin.

We were standing outside the cabin and I followed Pam as she walked to the side yard.  There, right next to the cabin, I  found this. 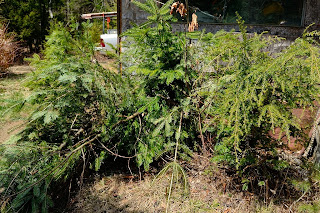 "Did you not see this?  You just walked right past it."

"What?  Isn't that our Christmas tree from last year?"

"We weren't here for Christmas last year.  We were in Florida."

This wasn't here on Sunday.  But it was on Monday.  It happened Sunday night after Pam left, meaning that the Sasquatch were watching her as she deposited the cats in the cabin.

These were all very small trees.  The largest pine tree was two inches in diameter, and it was twisted and broken.  A very small pine tree next to it was also snapped right off.  A tiny hardwood tree was bent over. 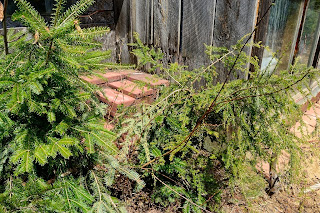 And, for the first time, I found twisted pricker tree branches.  See the photo below. 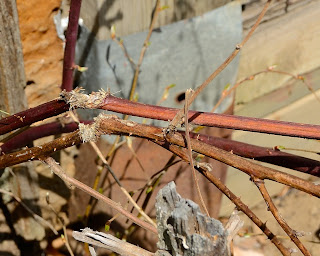 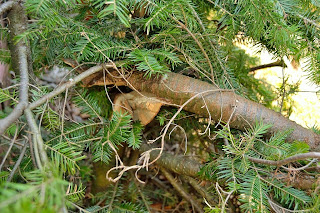 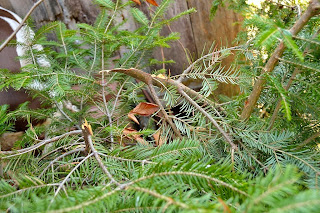 There are many forest animals which can break trees.  Black bears among them, and we have plenty.  But to grab a pine tree or a pricker bush and twist it requires a hand that grasps.  Bears don't have hands.   Only humans and apes have hands.

I posited that this could be one of two things.  It was either a trail marker, meaning that the Sasquatch are moving, most likely to Chase Lake up the mountain from us, and are leaving signs for others to follow.  Great.  We have a Sasquatch highway in our yard.

Or, it could be a warning.

I posted this on Facebook and a friend said that maybe it was like a bouquet of roses to say "welcome back!"