My dad was a kid during the Depression.  I remember him telling stories of the various peddlers that would come by his neighborhood.  The Freihofer's wagon pulled by a horse (which I also remember as a kid in the '50s), the milkman, the butcher, the ragman, the horseradish man... yep.  The horseradish man.   He walked the neighborhoods with a big bucket of horseradish strapped around his chest.  If you wanted to buy some, you presented him with a container and he'd ladle horseradish into it from his bucket.

Pam is a wonderful cook and so she does most of the cooking.  I only make some things well, like my Man Chili.  I won't divulge all of the ingredients here because Eric Snowden would then sell the recipe to the Chinese and use it against us, but one of the ingredients I use is horseradish.

One day, while making chili, I read the ingredients on the bottle of horseradish.  Contains horseradish, vinegar, and salt.   That's it?   Heck, what's special about that?  I can make my own horseradish.

So I did some research on Al Gore's interwebs and learned that horseradish is easy to grow.  It's almost like a weed.  You stick it in some dirt in a sunny place and leave it be for a year and it grows.  It's like a weed in that you better not do something dumb like rototill the horseradish patch because it will spread all throughout your garden.

Pam and I went off the mountain yesterday.  We hied ourselves to Tractor Supply to buy $300 worth of electric fence, and then stopped at the grocery store to pick up a couple of hundred dollars worth of stuff.  You know, half a cart full.  sigh.  While there, I bought a horseradish root.

This is basically how it's done.  You wash the horseradish root real good, and then peel it like a carrot. You cut it up into small cubes and dump those into a blender or food processor.  Grind it up.  A nuclear reaction takes place and creates heat.  Vinegar stops the fusion reaction.  So depending on how finely you grind the horseradish combined with how long you wait to add the vinegar determines how hot your final product will be. 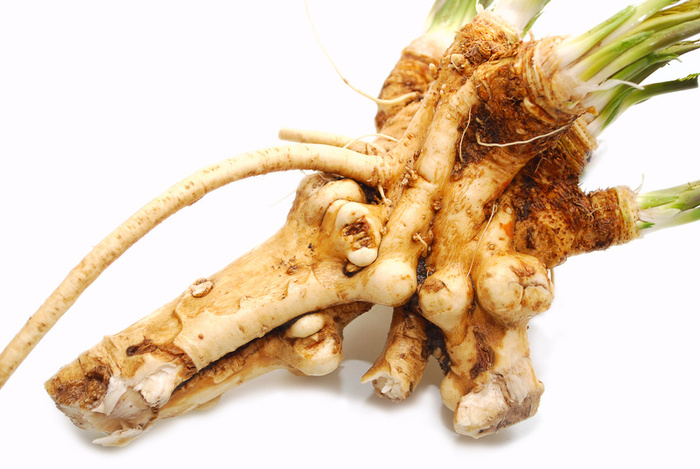 So I washed and peeled the horseradish root, saving the top to plant in my horseradish garden.  I then cubed the horseradish... the smell was definitely that of horseradish.  Not bad.  I even tasted a little piece of raw horseradish... not too hot at all.  I dropped the cubed horseradish in our blender and chopped it up real fine.  The odor was more intense, but not too overpowering... until I removed the blender's lid.  HOOOO HAAAA!  Wow!  That's goooood stuff!  The dogs ran outdoors.

Some recipes I read said to wait up to three minutes before stopping the nuclear reaction with vinegar. I waited four.  I took the lid off the blender.  My eyes and nose began to water at the same time as my hair started to curl and my moustache started to smoke.  I dumped in the vinegar, two teaspoons of sugar and one of salt and clamped the lid back on quickly.  The plastic lid felt a little soft, like it was melting.  I hit the blend button on the blender and let it hum for ten or fifteen seconds.

I lined a bowl with a paper towel to drain out the vinegar and picked up the blender to pour it in WHEN THE FRIGGIN' BOTTOM FELL OFF!   There was steaming toxic waste everywhere!  I guess I must have made some noise because Pam came running in to see what the fuss was.

THE BOTTOM CAME OFF THE BLENDER!  NOT MY FAULT!

I'll leave out the details of the conversation here.   Children may read this.  Suffice it to say that Pam rescued most of the horseradish in her usual cheery way while I opened all the windows and turned on the fan. 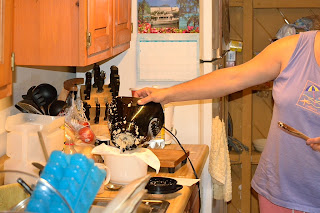 This is my finished product in the pic below, on the right.  On the left is a new jar of Farmer's horseradish, which I always thought was very good. 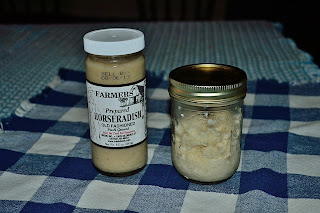 Bleecker Mountain Atomic Horseradish was a little time consuming to prepare, especially washing and peeling the roots, but we're definitely going to add it to our list of goods to be sold at the local farmers' markets.    I think I'm going to prepare it in its own building separate from the house though.  The new place will have too many flammable materials.