Yesterday started out promising.  Puss-Puss the cat was sitting in the cat tree.  She was staring at me, plotting my demise I think.  But at least she was out from under the bed.  Her daughter, Sassy, who is in heat, is always out yowling at us.  You can't touch her, but she wants you to know that she needs something.  What, I don't know. 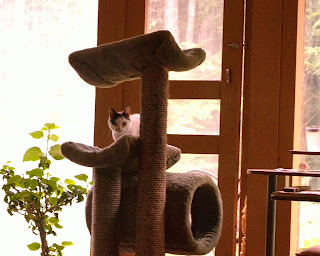 It was then off to the property.  There he was, Dumpy the Dump Truck Who Doesn't Dump.  Earl and I would be tackling that. 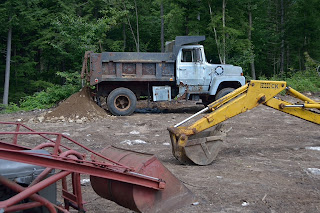 The first thing we did was to remove the 80,000 pound tailgate.  We don't need it.  I was up in the dump bed inspecting things when I noticed that one of the hinge pins holding the tailgate was loose.  All we needed to do was to lift the other end of the tailgate with the backhoe and we could get rid of it.   Which we did. 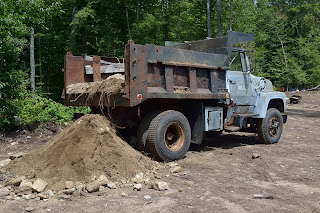 And living in Bleecker, we did what Bleeckerillians do.  We tossed it in the bushes. 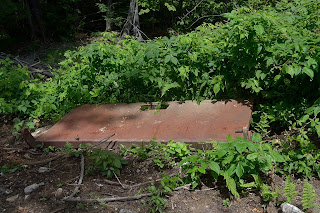 In order to get Dumpy to dump, we needed to add hydraulic fluid to the cylinder.  In order to do that, you have to raise the dump bed.  How do you do that when the truck needs hydraulic fluid and the dump bed won't raise?  I know.  Probably the most stupid engineering design in the history of all things automotive.  I would have thrown in the towel long ago, but not Earl.

First he got rid of the plywood box on the side of the truck, cutting it off with a grinder.  Yeah.  I see a cartoon moment here too. 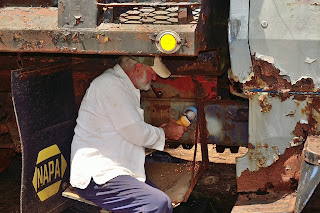 With the box out of the way, it was a simple, but tedious, matter to lift the box a few inches at a time with two hydraulic jacks, one on the port side and one on starboard. 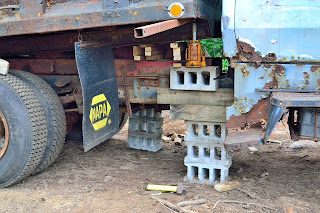 I know it looks precarious.  And it was.   This side (my side) kicked out the stack of cinder blocks once.   I learned to jack from the side, out of the way of flying cinder blocks. 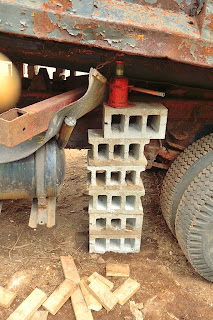 We got it jacked up enough that we could get to the fill plug on the hydraulic cylinder.   It was getting late, about 5 o'clock or so.  I figured that this was a good quitting time.  I was wrong.

Earl would be mostly correct.  Although I did work long hours in my computer business, I was mostly sitting on my ass, building computers or talking on the phone.   This is manual labor.  I'm not used to this shit.

So we used a garden hose with one end stuck into the cylinder and a funnel in the other raised up to the top of the dump box.  Earl held the hose while I poured in hydraulic fluid.  This was a long tedious process taking about an hour and a half to get in a couple of gallons.

"Let's fire it up!" said Earl, anxious to see if it would lift.

I hooked the negative battery cable up under the hood, climbed inside the truck and turned the key.

We have a dead battery, said I.

THE BATTERY IS DEAD!

Well, it could be the voltage regulator, or the alternator, and we've been running off the battery the few times we ran it.  Or, it could simply be a bad battery.  In any event, I fetched two victory beers and we sat down to ruminate on things.

"I'm disappointed," said Earl.  "I really wanted to see if it would dump."

Tomorrow.  I'm whooped.  I don't know how 83 year old Earl does it.  Or the almost 90 year old logger, Mr. Bleyl.  I'm 62 and I'm having a hard time keeping up with these guys, and I don't consider myself to be in bad shape.

Maybe once we've been living on the mountain for a spell, I'll hardy up a bit.  But for now, every bone and every muscle I have aches.  I'd call in sick today, but Earl really wants to see if the dump truck will dump, and he'd be over there working alone if I wasn't there.  Time to man up.  And maybe take a few pills to help things a bit.