My days are running one into another.   One is like the next.  Go to the property, move around some rocks or some logs, take a PBR break...

It was early morning.  Earl and I needed diesel fuel for the backhoe and Earl's tractor.  Pam was headed off the mountain to go grocery shopping, so I put two diesel jerry jugs behind the Kia.  When she finished feeding Jeremiah the Horse and came back to our place, she noted the jerry cans.

"Because then all of our groceries will stink like diesel,"  she stated flatly.

I know better than to try to reason with Pam when she states things flatly.

"I'll get diesel when I get back from grocery shopping."

Earl and I did what we could with what we had, Earl moving dirt and rocks and me moving logs and brush.  We stopped at 11 AM.

It was 90 degrees.  It's hard to argue with that logic.  The sun must be over the yardarm somewhere, so I handed Earl a PBR and took one for myself.  We sat.  And sat.  At 2 PM, there was still no sign of Pam.  We were at a standstill.

"I suppose we could go get diesel ourselves," said Earl finally.

So we sat in the screen house.   Look closely at the photo below. 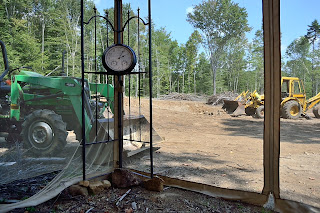 No, not at the huge hole in the screen made by our dogs, who we trained to run through screens on the boat.  Look at the scraggly pine tree in the far right of the pic.  See anything odd? 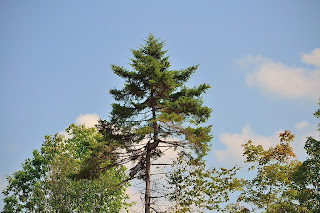 "Hey look, Earl.  What a great spot to go sit in a tree.  I can see your house and everything you're doing from up there"

I can't print Earl's response, since this is a family rated blog.

Pam and her mom finally got home close to 4 PM.  It was too late to get diesel for Earl and I.  We were done for the day.