We bought a pile of lumber from an Amish lumber mill in Ephratah, but the weather wasn't cooperating.  Rain, rain, and more rain.   Finally, a couple of days ago, it dried out enough to start building. 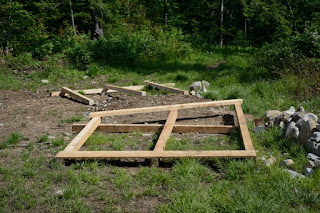 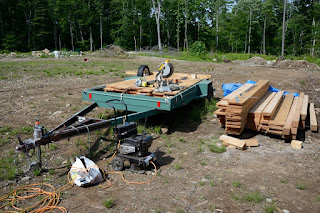 Earl came over and after I finished the second end wall wanted to raise it.  Earl is 85 and I'm partially handicapped.  We lifted as best we could but that wasn't going to happen.  I tried to start Bessie the Tractor to lift the walls with my hydraulic manure bucket but her battery was dead.  Earl fetched his tractor and we used the front bucket to raise the walls 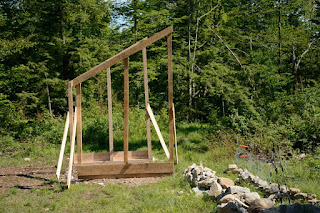 I sort of put them in position but was done for the day.  On Sunday, I'll make each wall level and plumb and square it up, and then the rest should be a piece of cake.

But before all this, I thought I'd make horseradish.  Pam and I bought two roots about a week ago at Pricechopper.  But when I pulled them out, one was moldy.  The second seemed fine, but since they were in the same bag I decided to plant them both. 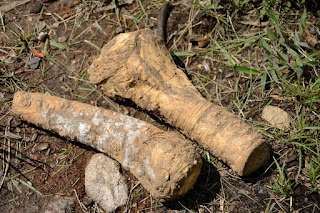 It feels good to finally be building something on our property even if it is only a run-in shed.   Next is a pump house, and then an outhouse.