It was a nice weekend for Pam and me this Memorial Day weekend.  On Saturday, we picked up Pam's mom Judi and our friend Bill and drove to nearby Caroga Lake for a craft show and flea market.  It was rained out, so we went to Vrooman's for a beer.  We stayed for four hours!  Vrooman's has the best wings that I've ever had, and we made some new friends and shot some pool.

Sunday was a wedding.  One of my cousin's sons was getting married.  Since Pam and I have been gone from the area for so long, it was wonderful to catch up with relatives.  We hope to do more catching up over the summer.

Today we had a big bonfire over on our Bleecker property.  Judi and Bill came over, and friends Trish and Theresa.  We grilled some burgers, ate some of Pam's wonderful potato salad, and sat around the fire drinking beer until almost dark, which was 9 PM here.

To honor our servicemen, I posted on Facebook the names and photos of the five kids from Waterford, New York who were killed in Vietnam.  I did this on one of those "You know you are from XXXX if you remember..." private groups.  Vietnam veterans (I am not one) were treated poorly on their return from their tours of duty.  Heck, anyone in the service during that era wasn't treated well.  Thankfully that's changing, and today people can separate our service men and women from the wars they fight.  Today, you can disagree with a war but still honor those serving in our military.

Why didn't I serve?  Well, first I had a college deferment.  But then I didn't, and my number in the draft lottery was 176.  I was living and working in Plattsburgh, New York at the time, and every night I'd watch the news to see where the lottery was.  It was getting close.  I was working with another fella who was also concerned.  We discussed what to do.  We both agreed that the worst thing that could happen would be to get drafted.  You'd go through basic training, get handed a gun, and then sent to Vietnam.  He decided to go to Canada.  I decided to enlist in the Army.  I then proceeded to fail my draft physical because of poor eyesight.  I was now 4-F.  To be honest, I was kind of peeved.  I had just psyched myself into a military career, and they didn't want me.

Life turned out just fine anyway, but I've often wondered how my life would have been different had I passed that physical.

For the families that have lost sons and daughters, mothers and fathers, cousins, and aunts and uncles in the service, you have my deepest sympathies.

This photo below was taken on my grandparent's farm in West Charlton, New York in 1950 or so.  My Uncle John is in uniform on the left and served in World War II.  The tyke on the right is my Uncle Frank and served as a corpsman in Vietnam. 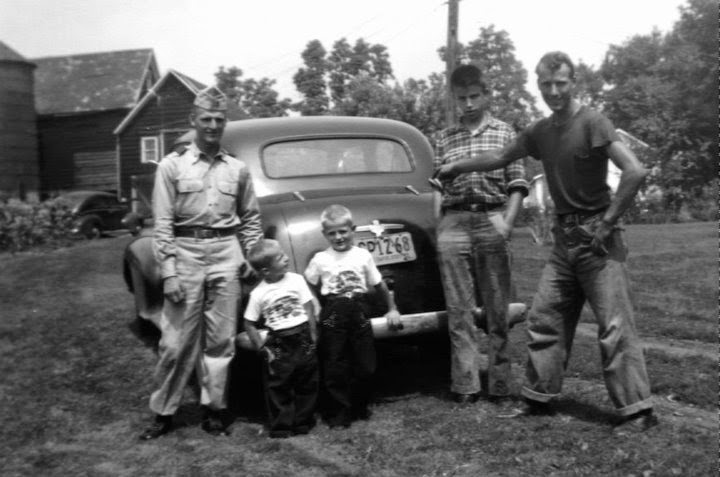 Frank came home from Vietnam but was not the same person as when he left.  As a corpsman, he saw some awful things.  Today, he would be diagnosed and treated for PTSD.  Not back then.  Frank, and his family, had some pretty rough times.  The effects of serving one's country doesn't always end when the enlistment does.   I know that Memorial Day is to honor those who died in the line of service, but for all of you who served and are still with us, you have my sincere gratitude too.