I'm an animal lover.  I think I got this from my Grandfather Chase, a Polish immigrant who came to America, married a farm girl, bought a farm, raised pigs and geese and rabbits and cattle... and couldn't slaughter anything.  My grandma had to do it.  He didn't have the heart.

As you know, I've been learning a bit about horses lately.  Horses are definitely more complicated than dogs and cats.  From what I've learned, horses love to have jobs.  For a draft horse, its pulling things.  For a trail horse, its riding.  For a race horse, its running.

I lived in Saratoga Springs for twenty years.  I went to the track only a handful of times.  I'm not a gambling person and don't understand why anyone is.  But the times I went, I enjoyed the horses and the people and  the pageantry of it all.

For some reason, on Facebook, I mentioned that Secretariat was perhaps one of the best race horses of all times, winning 20 of 21 races, losing in Saratoga to Onion.  Then I got thinking about Man o' War.  Who was the better horse?

Well, I googled a bit about Secretariat, and he was indeed a spectacular horse.  But when I googled Man o' War I was blown away.  This was a super horse.

He also ran 21 races, and won 20.  He lost to a horse named Upset at Saratoga, hence the phrase "being upset" by an underdog.  But by all accounts, Man o' War was cheated.  He was sideways in his starting position when the race started, and was poorly ridden and boxed in for most of the race.  When Man o' War  broke free, he accelerated and finished only a half a length behind Upset.  He went on to beat Upset six more times.  You can read an account of this race here.

But what was interesting to me is that Man o' War's owners and trainer told his jockey to hold the horse back at each race.  He measured 16.2 hands and 1,200 pounds, a big muscular horse.  He had a 28 foot stride, believed to be the longest ever.  He won each race easily, and the owners were afraid that such a dominant horse would have a hard time finding competition , as well as odds. 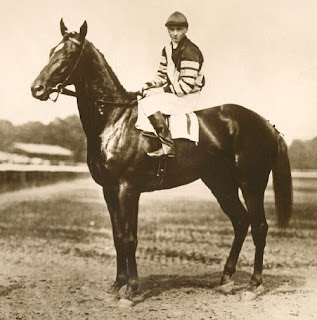 No one wanted to race against Man o' War at one point.  At Belmont, Man o' War could find only one challenger for the Lawrence Realization, a horse named Hoodwinked.  In this two horse race, Man o' War beat Hoodwinked by 100 lengths and set a world record for the 1 5/8ths mile that stands to this day.

The more I learn about horses, their temperament, their competitive spirits, and their attitudes, the more I like them.

I rode Pam's Morgan, Jeremiah, a few days ago.  Pam is a very experienced rider and once said that Jeremiah was head strong and nothing a novice rider like me should be on.  He was obstinate and a handful.  Well, a couple of weeks ago, Pam put a small child on Jeremiah,  He was as meek as a sheep.  Later, I rode Jeremiah recently and he was obedient and a smooth horse, but when I was unsaddling him, he gave me a look that said "I could have tossed your ass anytime I wanted, but I didn't, because I know you don't know what you're doing.  You just keep the treats coming and no one will get hurt."  I got the message loud and clear.

Some of this  may be coming from me watching the Sopranos for the first time off of Netflix, I dunno.  But it seemed very real to me.  Don't mess with the Mafia, and don't mess with horses.