The other day, we found this outside our Unabomber cabin's window. 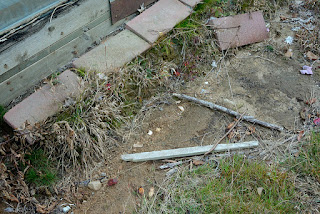 Pam has found many of those, always in the general shape of the letter "A".  Not knowing what they mean, we figured it might be some kind of signature, or calling card.   So Pam decided to design her own and made a kind of dragonfly on her Sasquatch stump.  She also left some puffballs, which was a waste of time, it turned out. 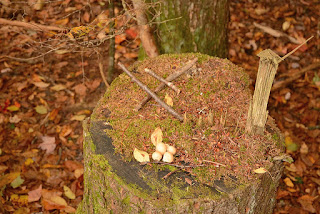 Last night, she went out to check the stump.  She came running back to the cabin.  I was inside on my laptop, no doubt saving the world on Facebook, when she came running by.  I immediately sprang into action and looked to see if she was being chased by anything.  Nope.  But she came flying into the cabin.... 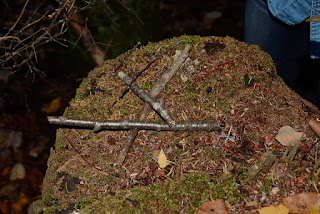 The sticks were rearranged into the familiar letter "A" shape.  Huh.  Me, being me, decided to peruse Al Gore's internets for some meaning.

Sasquatch are thought to have crossed the land bridge from Asia to North America many thousands of years ago, just like Native Americans, so I decided to review Chinese symbols.  I found this page -  http://www.zein.se/patrick/3000char.html

If you look at number six, you'll see that the inverted V ahape means "man".