The Goat Side Is Done

Well, technically speaking, it isn't really done since it doesn't have a roof, but I ordered the metal from Pro-Build in Johnstown and it should be here on Friday.

It's been brutally hot here.  It took two days to hand the Dutch door in the pic below.  Yep.  You read that right.  Two days. 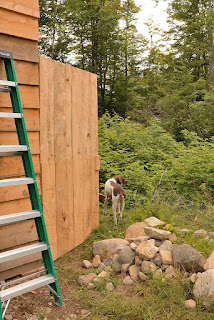 Today it was sunny, humid, and in the upper 80s.  I didn't plan on doing much, and I didn't.  All I got done was adding the goat bed to the goat side. 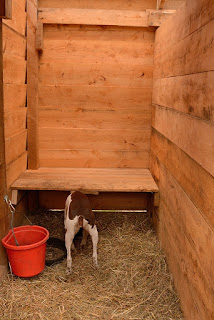 The goats seem to love their new house.  They were both in there while I was trying to install the bed, and as soon as it was up they were on it.

Tomorrow it's supposed to be even hotter than today, in the low 90s.   But I may work at a slow pace and try to get the door for the horse side built.  Then build the two doors for the little hay loft, and then screw the roof on.  Then on to the pump house.

I also decided to put a four foot extension on the run-in shed (already!) for use to store feed and such, and perhaps tack.  That will come after the pump house.