Pam's mom Judi found a fawn while driving a friend home here in Bleecker. They watched it for ten minutes or so, walking down Lilly Lake Road and blatting for it's mother. They decided it must have been orphaned, grabbed it, and brought it to our Unabomber Cabin for vet tech Pam to check out. 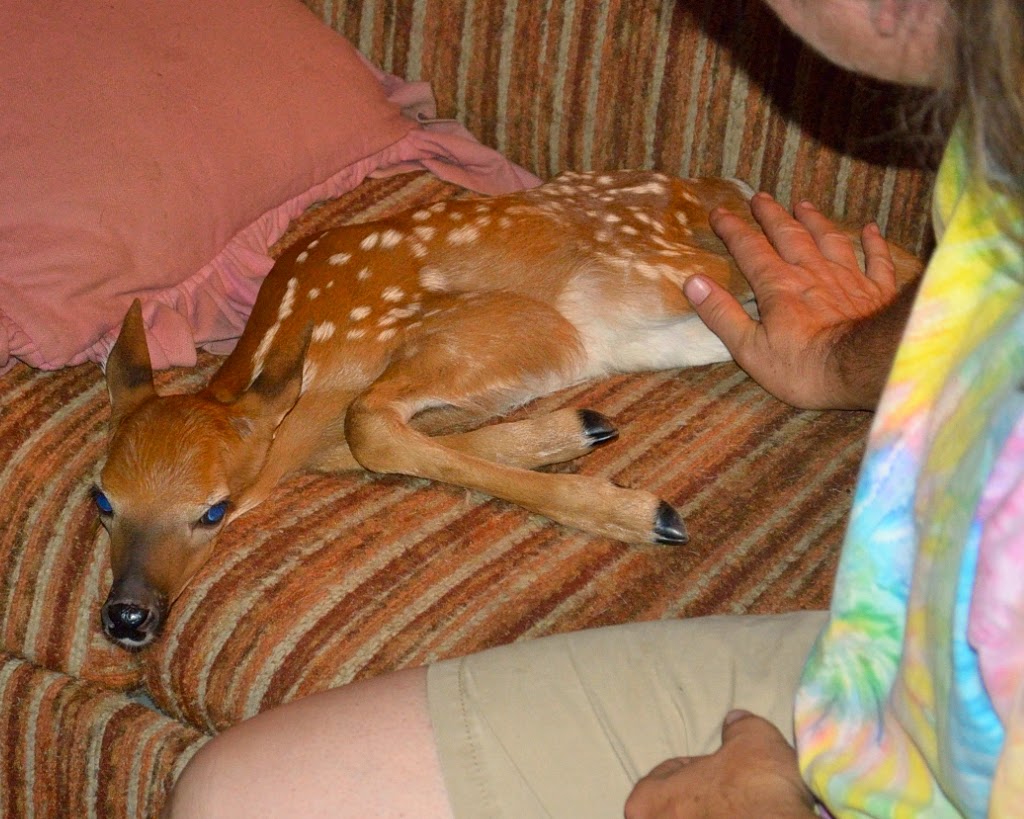 I know of a wildlife rescuer and rehabilitation place called Avian Experience / Sarah's Birds of Prey in Gloversville and called. We dropped it off tonight. On the ride there, we named her Lilly since she was found on Lilly Lake Road. Sarah checked him over and said he's about a week old, slightly dehydrated and vitamin deficient. She thinks that because he was found early, he has a good chance at making it. Sarah will bottle feed him until he's weaned and then give it to one of three does she has on site to finish raising it, and then he will be released back to the wild.
Yes, that's right. Lilly is a he. Just like the song A Boy Named Sue.  He'll grow up tough.

But what a beautiful boy, isn't he?

Fawns have absolutely no scent, and when their mothers leave to forage, they're to remain hidden under cover and to stay absolutely motionless.  This was born out when we let the dogs back into the cabin.  Pam was holding Lilly, and the dogs didn't sense him at all.   They didn't sniff around the cabin, nor did they sniff Pam.  No scent.

If you come across a fawn in the wild, leave it be.  It is what deer do.  The fawn stays put while mama grazes.  Do NOT "rescue" it, because it doesn't needing rescuing.  Lilly did, unfortunately.  We've been hearing coyotes again, and I have to wonder if that's what got Lilly's mom.
Posted by Dave Gibson at 12:06 AM