Leveling and Smoothing the Land

The past couple of days have been serious work days on the land.  After grading with a bulldozer, despite the great job done by Briggs & Rowback, the place was covered in ruts and holes, and there were still rocks everywhere.  Now it's a job for Bessie, our 1952 Ferguson TO-30.

For you observant, regular readers, you might be thinking "Hey!  You posted before that it's a '54!".

But you wouldn't know it.  What a workhorse!  She has absolutely no problem towing Earl's custom made land leveler which is the front end of a mobile home frame with cinder blocks on top. 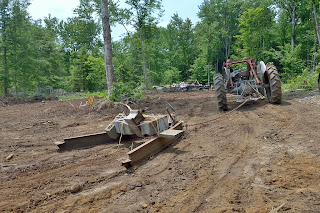 It cuts the high spots and fills in the low spots.

There's a huge area that's too wet and muddy to level, so I did the "outside of the donut".  After getting that pretty good, I decided to hook up Earl's homemade rake.  It too worked great, although it may be a bit premature to rake the land.  There's still too much in the way of rocks and... crud. 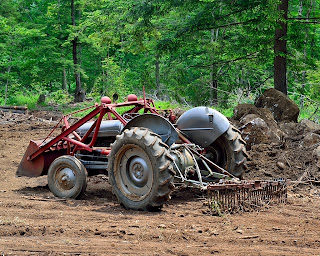 Speaking of rocks, does anyone need any?  We have many more than we need, and would be happy to part with some.  We have large ones, small ones, and everything in between.  Just come help yourselves.

Tech Support Corner:
Some of our followers have told me that this blog "doesn't update".  It doesn't show when a new post is made.  The only thing I can think of is that they're following one particular post, and not the blog itself.

Delete whatever you're following.  Go to the top of this page and click on the Bleecker Mountain Life header.  Or, go to your address bar and delete everything after "http://www.bleeckermountainlife.blogspot.com".  Then follow it.  Hopefully, that will correct the problem.  If it doesn't, please give me more detailed information and I'll figure out what's going on.