Too Many Projects to Count


Pam and I are renting a little camp about a mile from where we're going to build.  While most of our efforts will be directed towards our own place, we're working around the camp to make it nice.  It's been unoccupied for a couple of years and looks it.  And because it's a camp, maintenance has been put off.

The first job was to replace the faucet in the bathroom.  The washerless faucet was dripping real good and I picked up a replacement at Home Cheapo for $19. 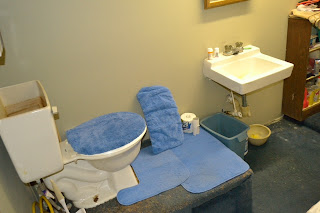 You might notice that the throne is a throne, raised up a foot or so.  The camp was built on a slab.

This is the old, nasty leaking faucet. 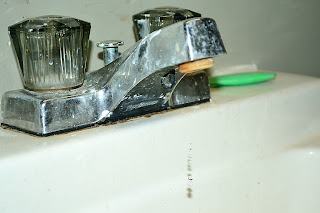 This kind of a project might be a fun one to blog about on Drift Away, our old trawler, because nothing is ever easy on a boat.  But in a house, it's a pretty mundane project.  The only exciting part was trying to get the hot water hose connected so it didn't leak.  Someone cross threaded the plastic nut and I had a heck of a time getting it on straight.

The next job was to install a screen door.  I wanted the old fashioned wooden kind with a spring that makes the door bang everytime it shuts.  It does, I'm pleased to say. 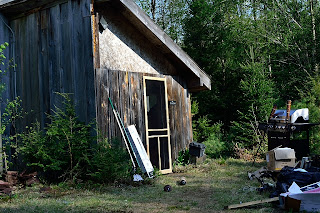 Yeah, I'll be cleaning up that mess soon.

Pam was heading down the mountain to see her friend Kim.  I asked where she wanted the screen house we bought.  She indicated a spot that's the only somewhat level place on the property, but it was covered in scrub pines. I needed to cut them all down.  The camp's owner has a couple of gizmos that look like weed whackers, but with blades instead of nylon lines.  The one with a circular saw on the end was broken, but after some effort I got the other to start.  It didn't cut worth a crap, but I worked at it, basically using it like an ax to chop down the little trees.  After a couple of hours it ran out of gas.  I set it down to let it cool and while I waited, I examined the blade closely.  The cutting edge was blunt and dull, but the back edge seemed sharp... it was mounted upside down!  I removed it and flipped it, filled it was gas, and it cut like a charm.  Soon I had a place big enough for the 10 x 10 screen house.

I was so ambitious at this point that I decided to attack all the scrub pines growing on the south side of the camp where all the windows are.  I got them all except for the biggest ones.  It was then that my father-in-law Earl showed up with his chainsaw, and I had most of the rest cut in short order.  I was exhausted and had to stop.   While Earl and I were enjoying victory beers, I glanced at the instructions for assembling the screen house.

"Do you want help with that?" asked Earl.

I wasn't going to tackle any more project, but decided that it would be a nice surprise for Pam if it was up when she returned.  Within a couple of hours, we had the screen house up and were enjoying victory beers in it. 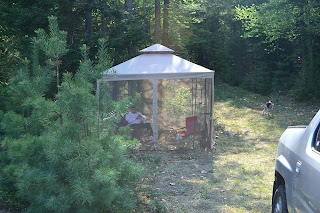 Earl left, and shortly thereafter Pam returned and was pleasantly surprised.  We spent the rest of the evening enjoying sitting out in the screen house, bothered only by the black flies who were trapped inside when we put it up.  When they die off, it will be nice in there.

Today, I'm heading off the mountain to get into cell phone range to call Verizon tech support.  I had called them a couple of days ago to tell them that I had no service, even though I'm supposedly only four miles from a cell tower.  Kristen said that coverage here is "spotty" and she'll have an engineer check it out and get back to me.  Well, yesterday she called and left a message on my cell phone that it appears that I might have a problem with my Jet Pack because there's no activity on it and they can't connect to it.  Well duh.  I told her it works fine if I drive off the mountain and sit in a parking lot someplace, but not on the mountain.  Of course they can't connect to it.  So this should be a fun call.  But at least I can update the blog while I'm sitting in the Walmart parking lot. 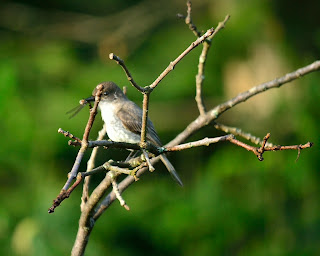