Pam and  I started on the little foundation for our little 8x8 pump house next to the well.  It will hold our shallow well pump, replacing the hand pump on the well head there now, and eventually that too will be replaced with a deep well pump. 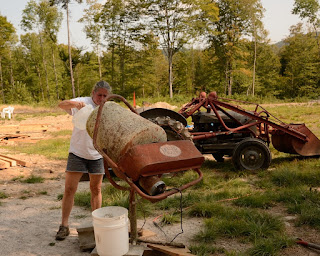 I had already made the forms.  Yeah, its sloppy, but I didn't want to cut perfectly good 1x10 boards that would be used for four tiny foundation walls for a shed.  So they'll have ridges. 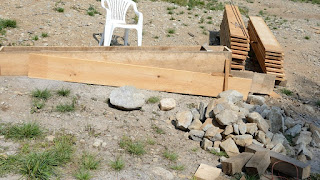 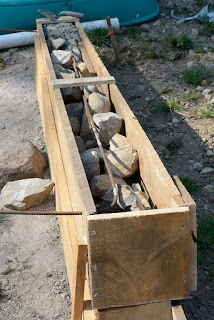 The top was poured and screed.  Looks pretty good, eh? 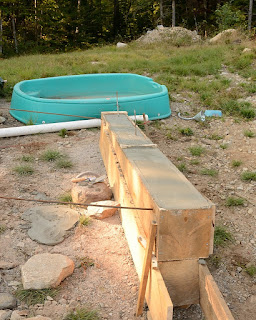 Pam poured the excess cement on the ground.  I later found a Sasquatch print in it.  Amazingly, it is the same size as Pam's foot.  What are the odds of that? 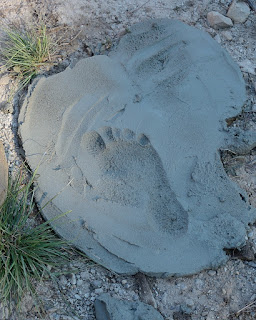 and here is the wall with the forms removed.  You can see a lot of gaps in the cement.   Careful as I was, I didn't get enough cement down around the rocks.  Next time, we'll pour the cement in and then push in the rocks, and when I take the forms off, take a hammer and chip off the cement stuck to the outside of the face rocks. 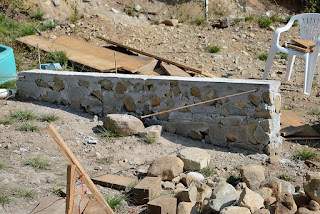 As bad as it looks, we were smart enough to start with the wall in the back, the one no one will see but us.