First, let me start off that I am NOT saying that the following is Sasquatch. I think it is a strange atmospheric phenomenon following a Sasquatch visit. Coincidence.


September 4, 2015; Pam and I drove to Whitehall, NY to be interviewed about our Sasquatch experiences for a documentary. It was a lot of fun. We gave them about 45 minutes of interview, which will have to be cut way down to fit in their other interviewees.


When we got home, it was dark. Thankfully, Pam left cabin lights on. It is pitch black here at night. She was leading me to the cabin door (I'm night blind) when she stopped dead (I walked into her) and yelled "David! Its right here! Something big is in the bushes!" Being night blind, I couldn't see anything, and being 65, I couldn't hear anything. But then I saw bright red eye shine, so bright that it is easy to see how some people thing that Sasquatch can emit light from their eyes. I only saw one, the other hidden by something, and then it turned its head and was gone.


In the cabin, Pam said the stars were very bright, so I went back outside to take star photos. Each was five seconds in duration. They were all normal, except this one. 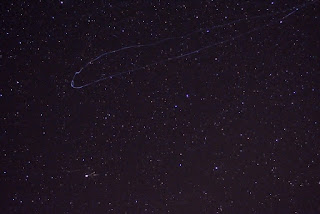 No, I have no idea what it is. I do NOT believe that Sasquatch turn into orbs of light and fly off in UFOs, but the coincidence here was startling, and amusing. To me anyway.
Here are two close cropped pics from the above photo; 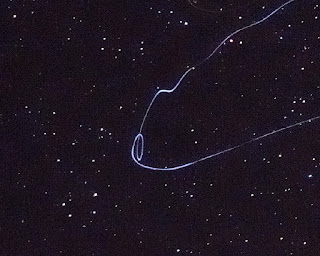 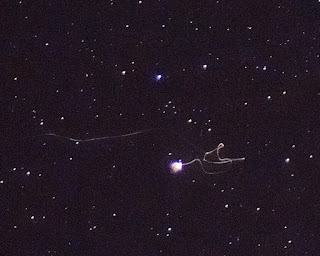 I think it must be some kind of strange electrical phenomenon.

Saturday night, I was sitting home alone, Pam off horseback riding. Suddenly, the cabin started to shake and I barely could hear a very, very low noise of some sort. I called my friend Bill who lives about five miles from here. His house didn't shake, so no earthquake. Infrasound maybe?


Infrasound is low frequency sound that is lower than a human's ability to hear, below 20 Hz. For a person to detect infrasound, the sound generated must be very high. Many animals are capable of infrasound and use it to either stun prey or to communicate. These include whales, elephants, alligators, hippopotamus, rhinoceros, and giraffes. And Sasquatch.

Yesterday, September 6th, I was putting things in the backseat of my car to leave the property we're building on and to head to the cabin we rent for the night. There in the back seat was boxed leftovers from the night before. I wasn't going to eat it, so I opened the container and placed it on top of our grill, putting it about five feet off the ground.

Today, I arrived at the property. The container was right where I left it on the grill, but the steak was gone. Whatever got it could reach up at least five feet, ruling out every area creature except one.
Posted by Dave Gibson at 8:18 AM