Today was a productive day on the mountain.  While Pam trailered Jeremiah the Horse to the vet for a health check, I assembled Bessie the Tractor's frame for its winter tarp.  I'll be able to drive into one end of the frame, and then walk the three legs of the tripod, one by one, into position behind her. 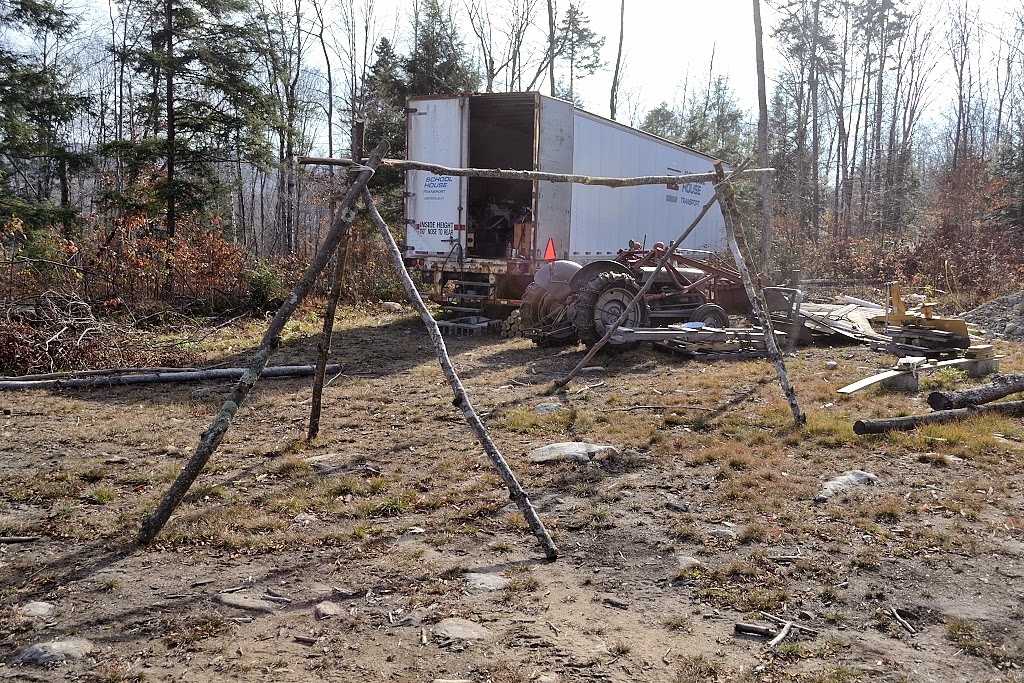 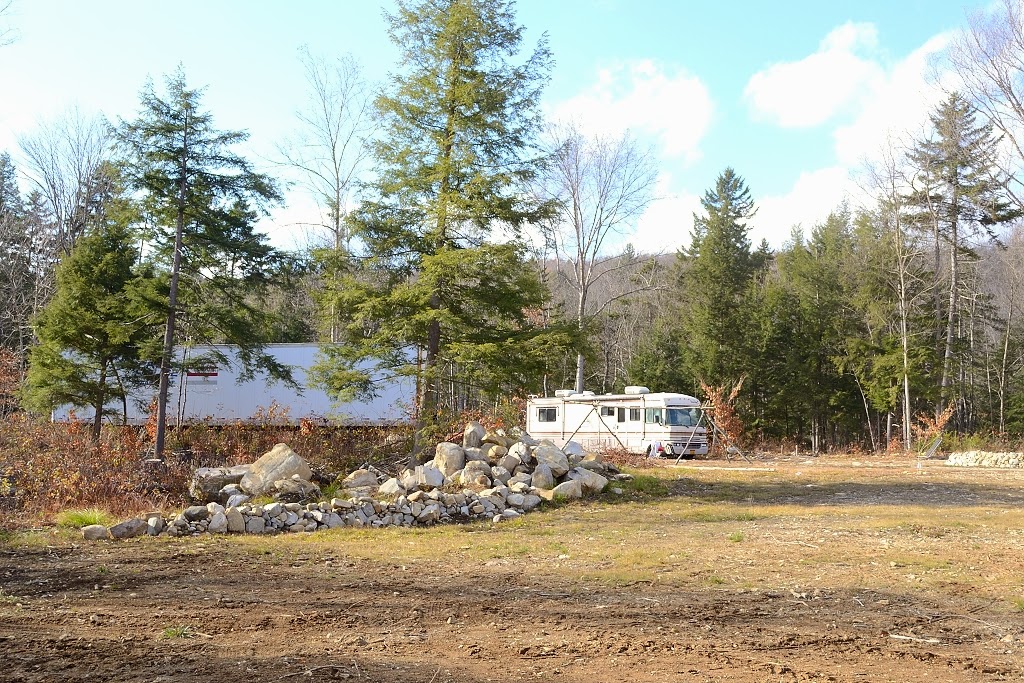 I decided to check the game trail for tracks.  Besides dogs, we've seen deer and sasquatch prints here.  Three sets of sasquatch prints, actually.  One set much larger than my size 11, one about the same size, and one smaller.  Dad, mom, and kid?  As I looked down the trail, I noticed a twisted and broken stick.  According to a DVD recently sent to me by a sasquatch group in Georgia, sasquatches will sometimes to this to mark territories. 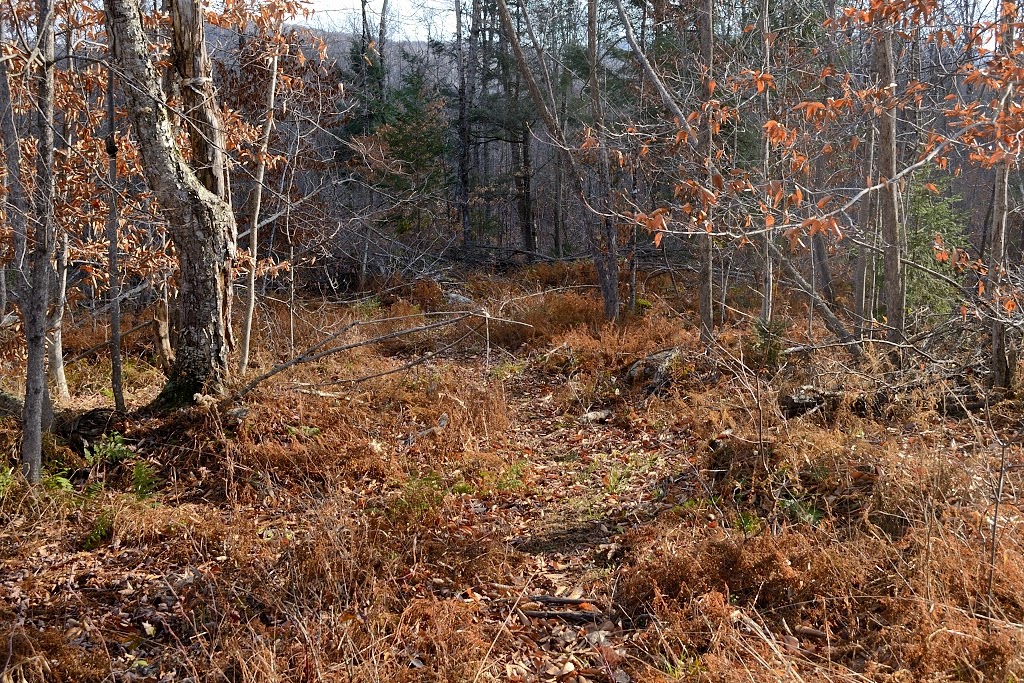 This is it up close.  Not too big of a stick, but definitely broken and twisted.  But a person could do this. 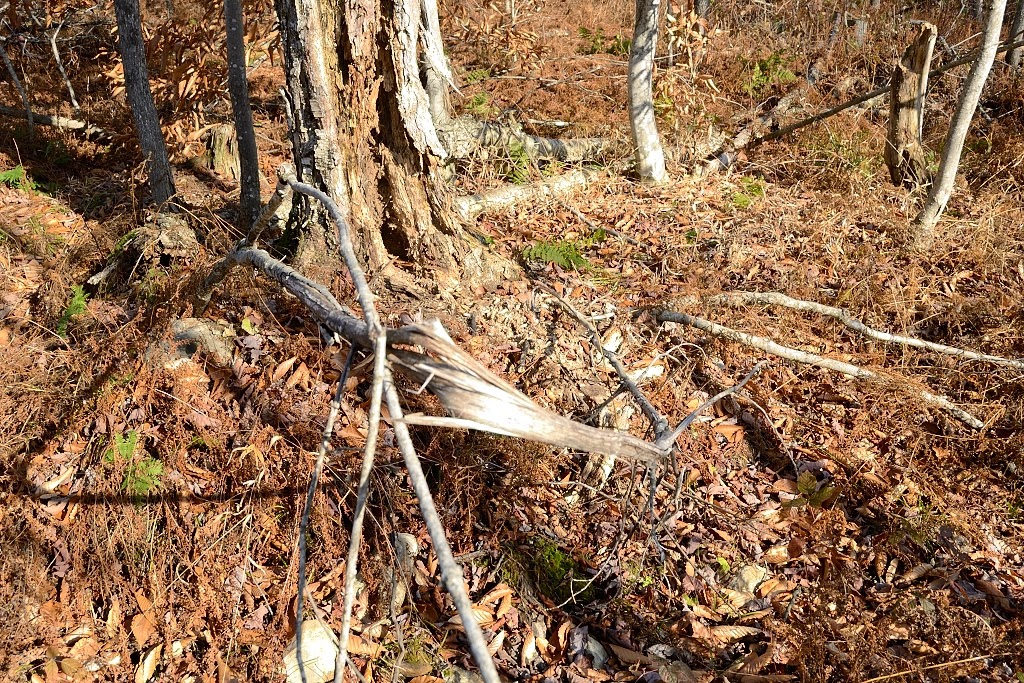 I went just a little farther, and what I found made my jaw drop.  Very large saplings were bent over and then covered with small branches, making a little hut of sorts.  The large tree in the middle was pushed over, either by the wind or a large sasquatch, sometime within the past two years.  How do I know?  There is a green ribbon tied around it.  Pam and I marked the trees the loggers were not to cut with these green ribbons.  The tree was not cut, but pushed over.  Later, the smaller saplings were bent over and held with logs and branches, forming a cave of sorts. 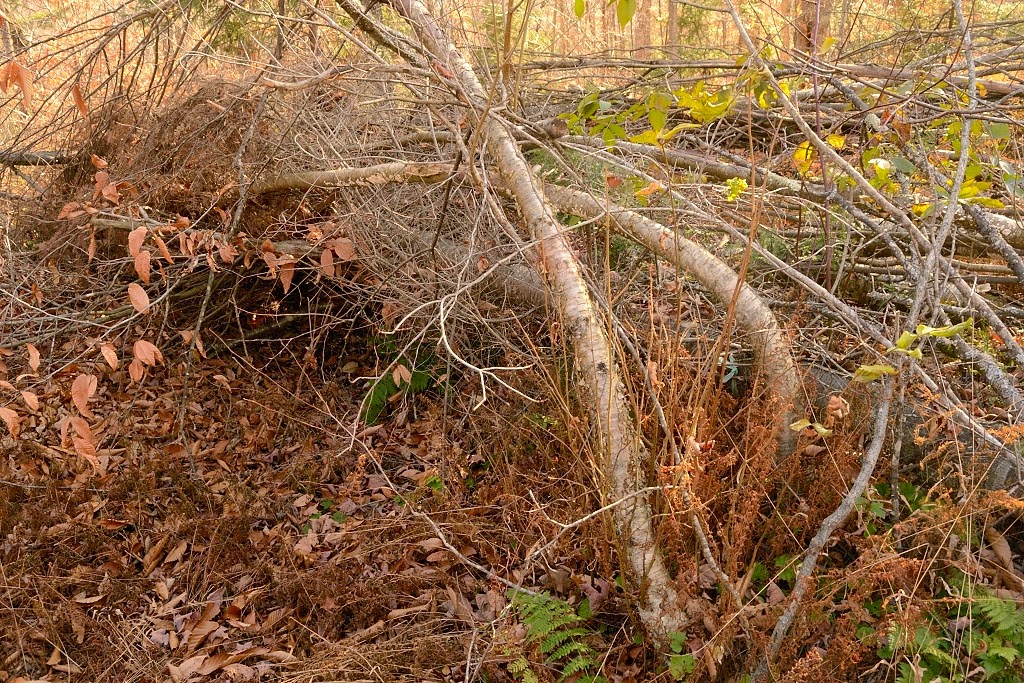 The low entrance is in the pic below.  Just large enough for something to crawl into to sleep.  Our dogs, who will climb into anything to look for rodents, wouldn't set foot inside this. 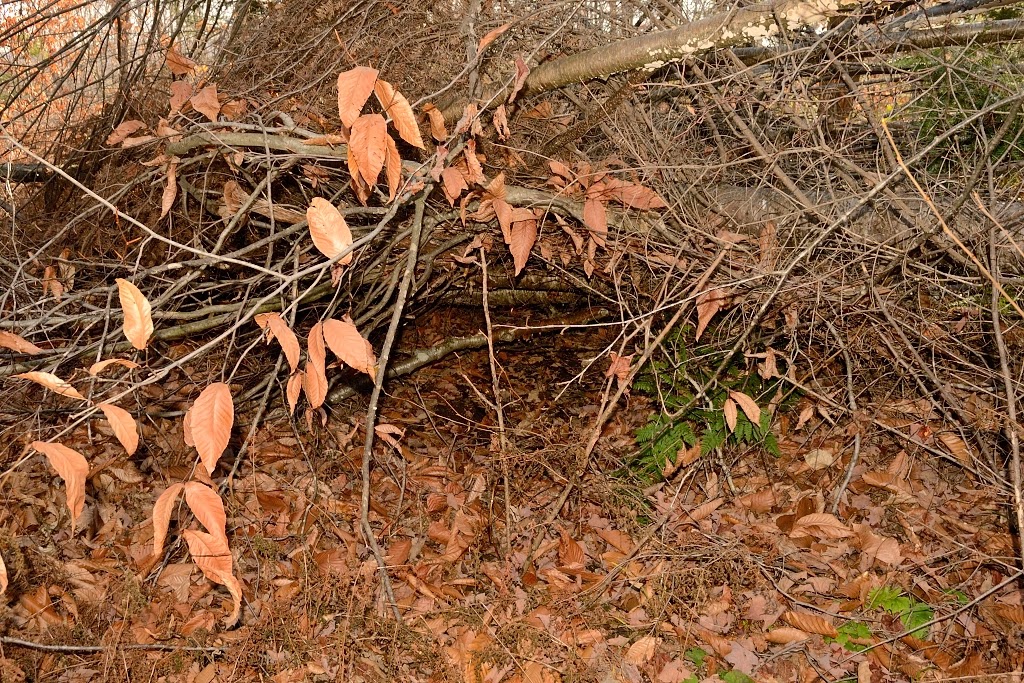 It was also very long.  Large enough for a sasquatch family of three, certainly. 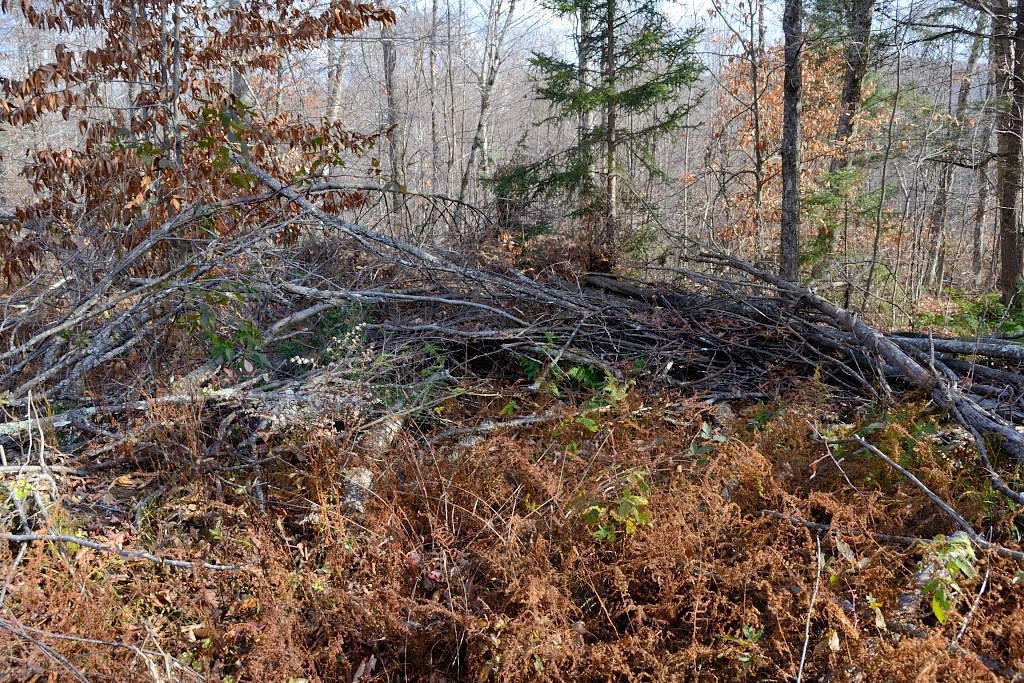 The trail split here.  To the right were more broken and twisted branches. 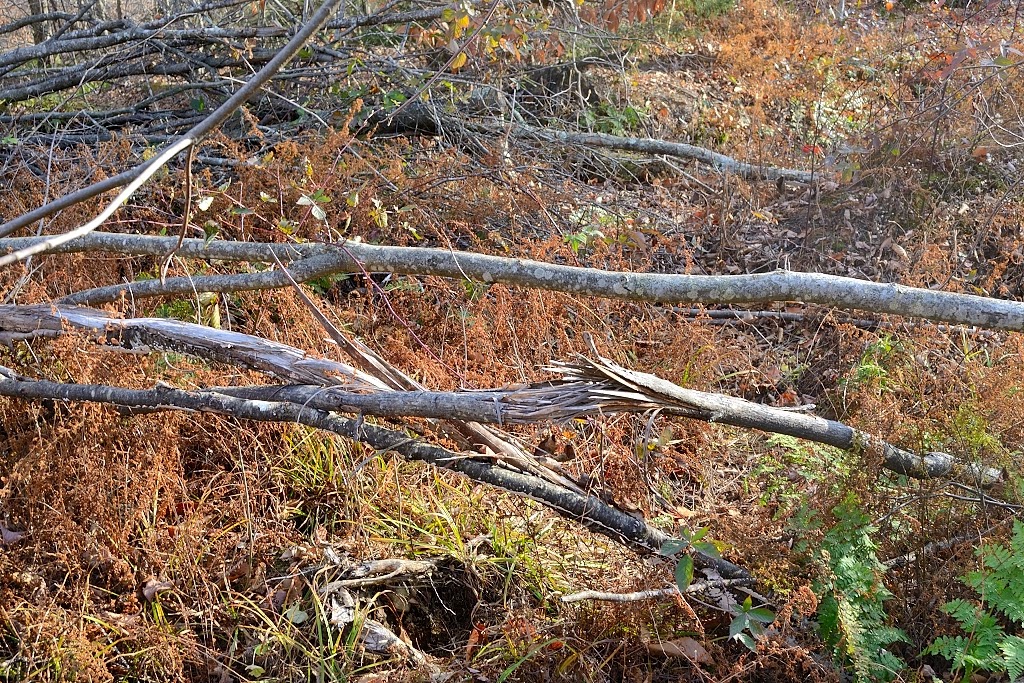 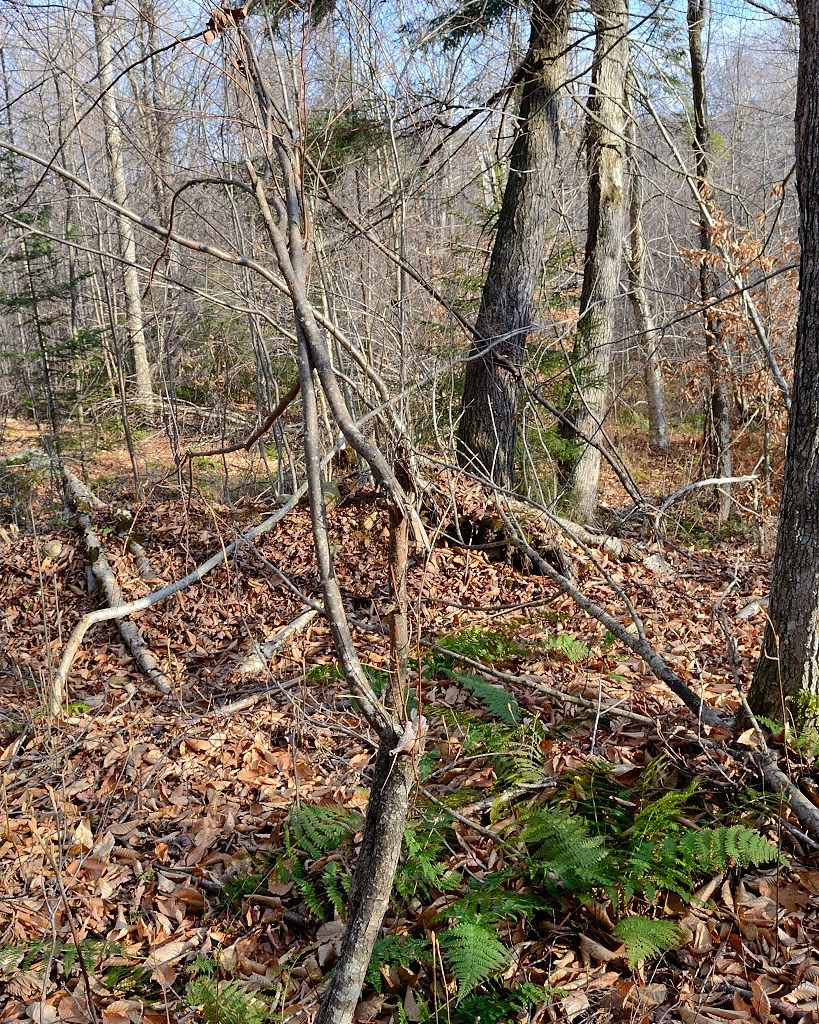 But this was the most bizarre.  This very large sapling was pulled down horizontal, and then bent backwards and held in place by another tree. 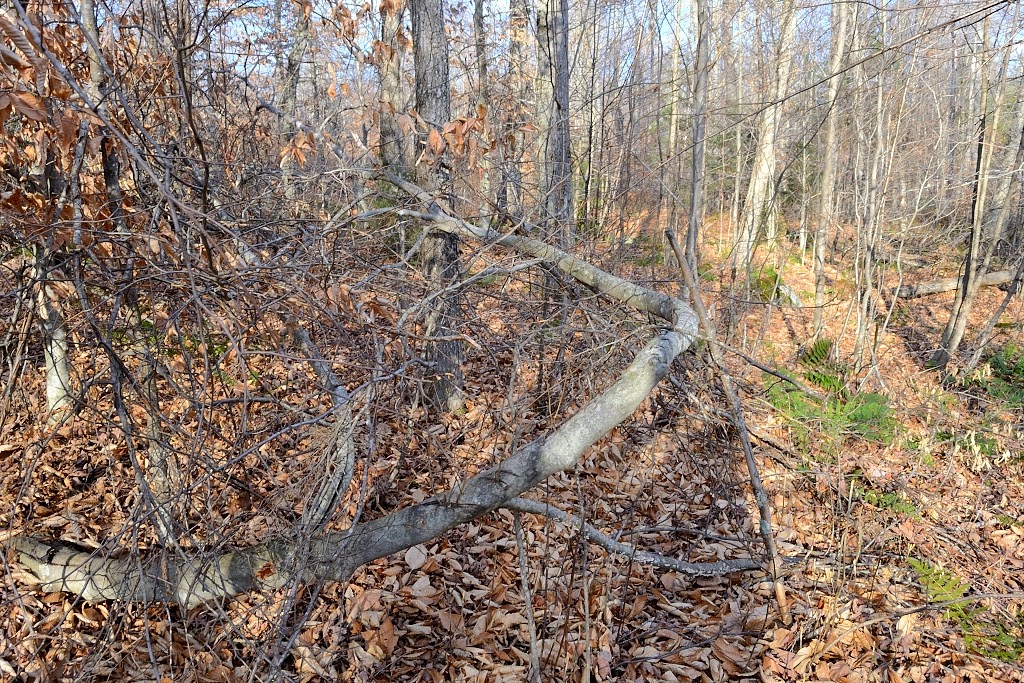 Another view of the same tree from farther back.  The top branches of this tree were also broken and twisted.  Could this also be some kind of territorial marker?  Something obviously made, and not by natural causes?  This was on the state land that borders our property. 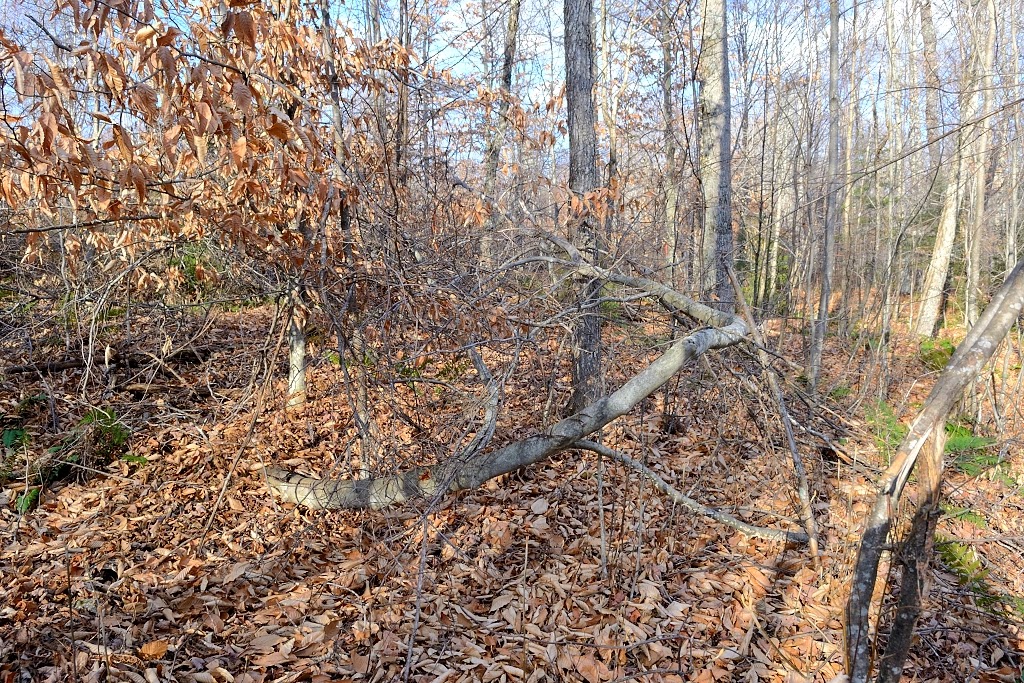 Besides the massive hand print on the back of our car, this was the most compelling signs I've seen of... something.