People who live a far piece from civilization tend to be independent.  Earl, my 84 year old father-in-law is such a person.  Of course, he refuses to be called my father-in-law, so I always introduce him as my younger brother who has had a rough life.

But make no mistake about it.  Earl is a tough old bird.  He's an accomplished machinist and owned his own machine shop for many years.  He is also a pretty fair mechanic.

So the other day, we're sitting having a beer and Earl asks "How many miles do you have on your car now?".

"Have you checked the brakes?"

So Earl and I drag out his hydraulic jack, pull a front wheel, and look.

"Well, they're OK, but you'll need to replace them soon," said Earl.  "Bill just spent $370 having his front brakes replaced.  We can do it ourselves."

This sounded good to me, so I hied myself off the mountain and spent $53 for the best ceramic disc brakes that Advance Auto sells.  The next day, "we" are going to install them.

I've installed and adjusted many drum brakes in my day.  In the days of yore, you were adjusting brakes every few thousand miles, and replacing them every ten thousand or so.  But I'd never done disc brakes.

Since I'm still disabled, Earl did most of the grunt work while I handed him tools and offered advice.  Useful advice, such as "I should have parked the car in the shade." 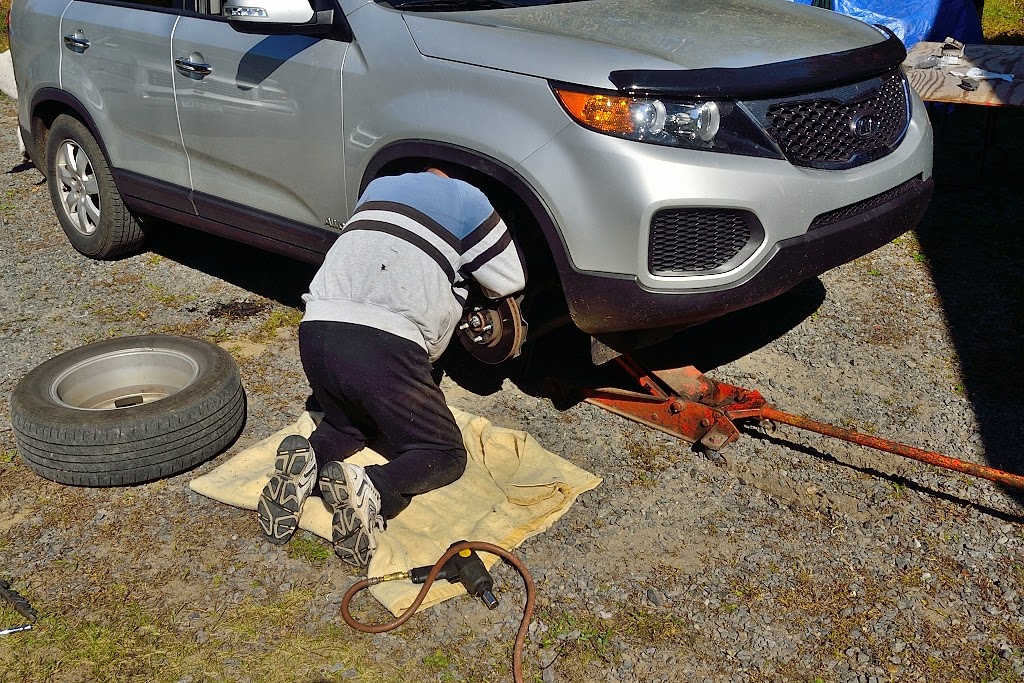 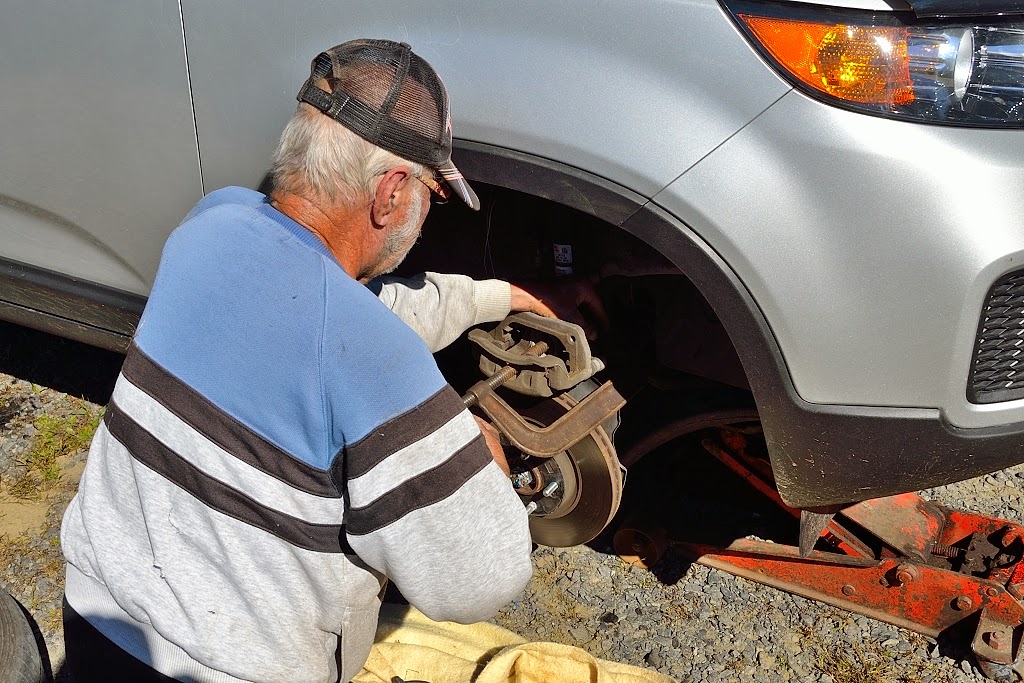 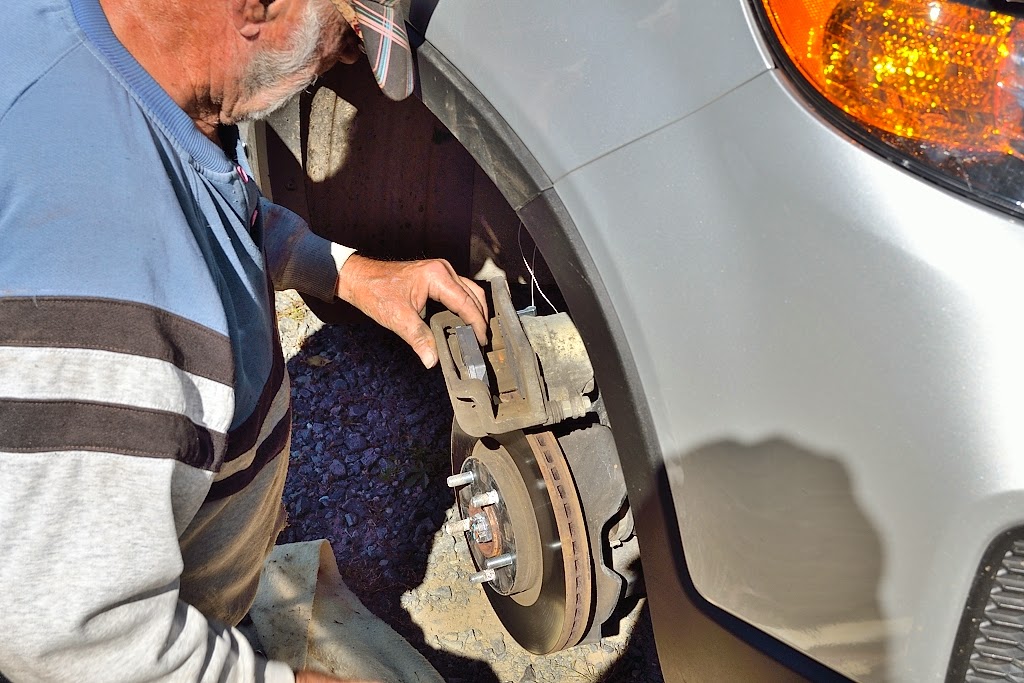 The left side was done in an hour and a half.  But that included fetching various tools, and a half hour beer break.  The driver's side was about 20 minutes.  Disc brakes are truly simple.

In the pic below, the new brake pads are above the old ones.  As you can see, there was still a lot of miles left on them, but for $53, less a $10 rebate, I couldn't see waiting.  Why score rotors? 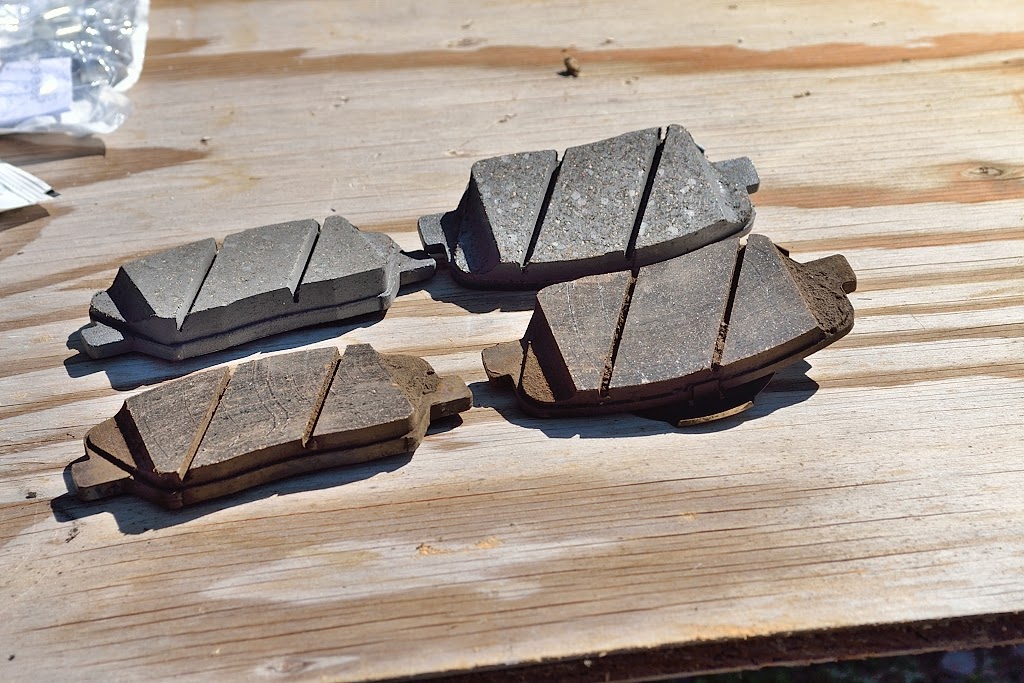 The back brakes?  We'll maybe check those tomorrow.  No sense in rushing these things.