As many of you know, I recently published a book called "Living Among Sasquatch:  A Primer" that chronicles our learning curve of living with Sasquatch as neighbors.   This could be the making of a new book I'd call "Kayaking Among Monkeys".   Of course, it might be the world's shortest book since this is all there is to tell.

We dropped our Kayaks in at Ray Wayside Park on the Silver River.  It was easy paddling for the first hundred yards or so... 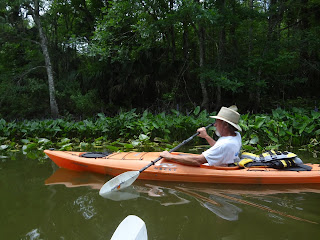 but once we got on the river proper, we had to paddle upstream against a fairly strong current moving at three knots or so.  Ordinarily I would be up to the challenge, but a torn rotator cuff had me often struggling.   But the incentive was to get far enough upstream to see Rhesus monkeys, which we did. 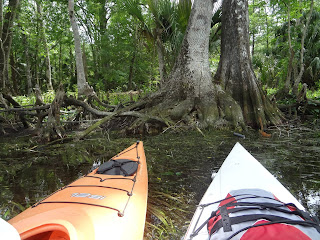 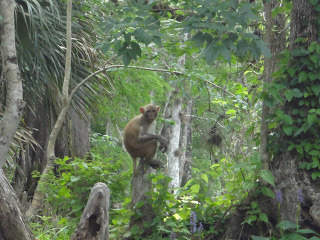 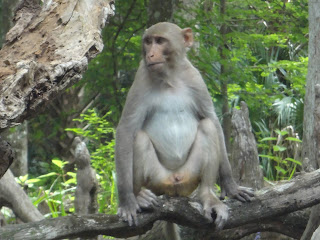 Yes, they were this close and not afraid of people at all.

It is commonly thought that these Rhesus Macaque monkeys were either set loose or escaped after the filming of a Tarzan movie in Silver Springs, but actually they were purchase by Colonel Tooey in the 1930s.  Tooey ran a tourist river cruise boat and thought they'd be a nice tourist attraction.  He placed them on an island at Devil's Elbow on the river, but they promptly swam over to the forest.

In 1963 they had grown to an estimated 78 monkeys, and now live in four groups totaling about 200, but they are now expanding from the park all through the Ocala area.

It is not a good idea to make close contact with the monkeys because they carry the Herpes B virus, which can be deadly to humans and cause brain damage and death.