Yep, those are two words I never thought I'd use together, but see? 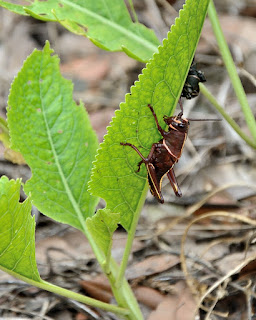 From the University of Florida...

"The eastern lubber is surely the most distinctive grasshopper species in the southeastern United States. It is well known both for its size and its unique coloration. The wings offer little help with mobility for they are rarely more than half the length of the abdomen. This species is incapable of flight and can jump only short distances.The eastern lubber is quite clumsy and slow in movement and mostly travels by walking and crawling feebly over the substrate. The “lubber” designation is interesting because it aptly describes this grasshopper. “Lubber” is derived from an old English word “lobre” which means lazy or clumsy. This term has come to mean a big, clumsy, and stupid person, also known as a lout or lummox. In modern times, it is normally used only by seafarers, who term novices “landlubbers”. Eastern lubber is one of only four species in the family Romaleidae found north of Mexico, but there are many other species in South America, and many are winged and agile, so although some other species in this family are called lubbers, the “lubber” designation is not appropriate for the entire family."

This guy was happily eating my struggling horseradish plant.  Horseradish isn't supposed to grow here, but it is trying.   I should have stomped on it, I guess, but he was simply too pretty so I let him be.  I can always buy horseradish, as bad as store bought horseradish is.