As most of you regular readers know, Pam and I had our Sasquatch "encounters" starting in 2013 in Bleecker, but were too oblivious to know what was happening until 2014.  Since last summer, I have become a voracious researcher of all things Sasquatch.   I've pounded Google, ordered books and DVDs from Amazon, and have quickly become more Sasquatch aware.

We're wintering in Eureka, Florida, which is surrounded by the Ocala National Forest, in much the same way that Bleecker is surrounded by the Adirondack State Park.  This is a Sasquatch hot spot, with many more sighting reports than Bleecker could ever hope for.  Well, actually, according to the BFRO (Big Foot Research Organization) there are no Bleecker reports, but there are for Eureka, neighboring Fort McCoy, and the Ocala National Forest.

Pam and I both heard distinctive "WHOOOP!  WHOOOP!" calls the other day while sitting in our RV with the windows open on a warm night.  This sent all of the neighborhood dogs into barking fits. Whoops are ape vocalizations.  Apes are alive and well in Eureka.

So yesterday, we decided to walk the three mile trail into the forest to the Ocklawaha River and apply our new found knowledge of Sasquatch / Skunk Apes to see what we could find.  A Skunk Ape, by the way, is a relative to Sasquatch, but is found only in the deep south and is particularly foul smelling.

First, since I missed taking a photo of a Sasquatch-like shape in Bleecker, assuming it was a trick of the shadows, only to look away for a minute and then look back and it was gone, I now take pics of anything remotely resembling a Sasquatch.

I present to you Palmetto Tree Man. 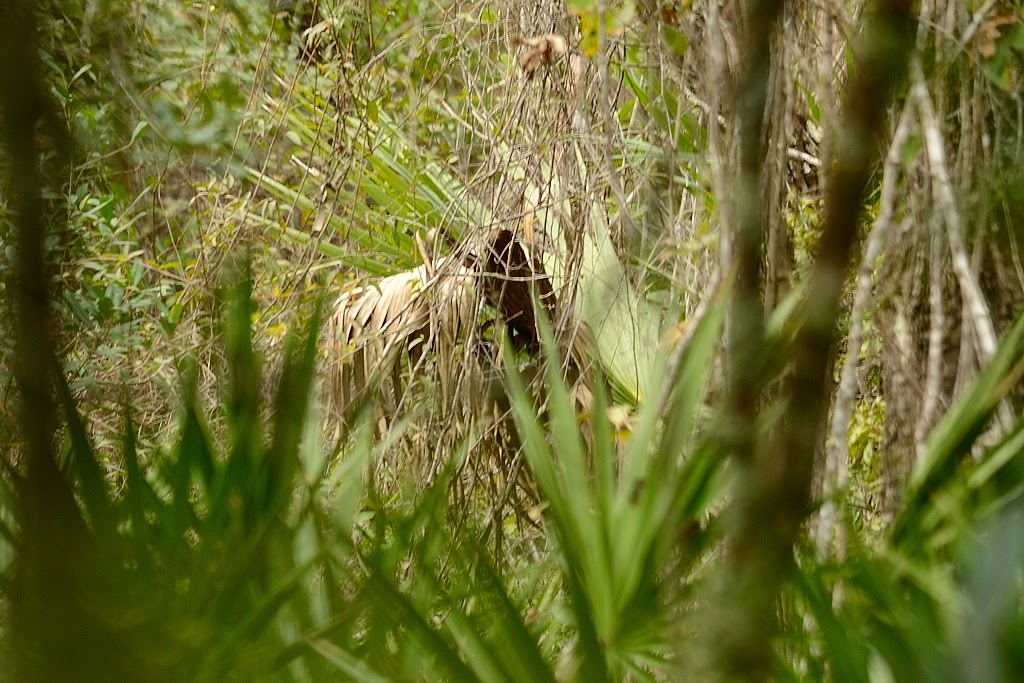 This is not a Sasquatch foot print, but I have no idea what it could possibly be.  It was fresh, and there were several.  It was about as wide as my foot. 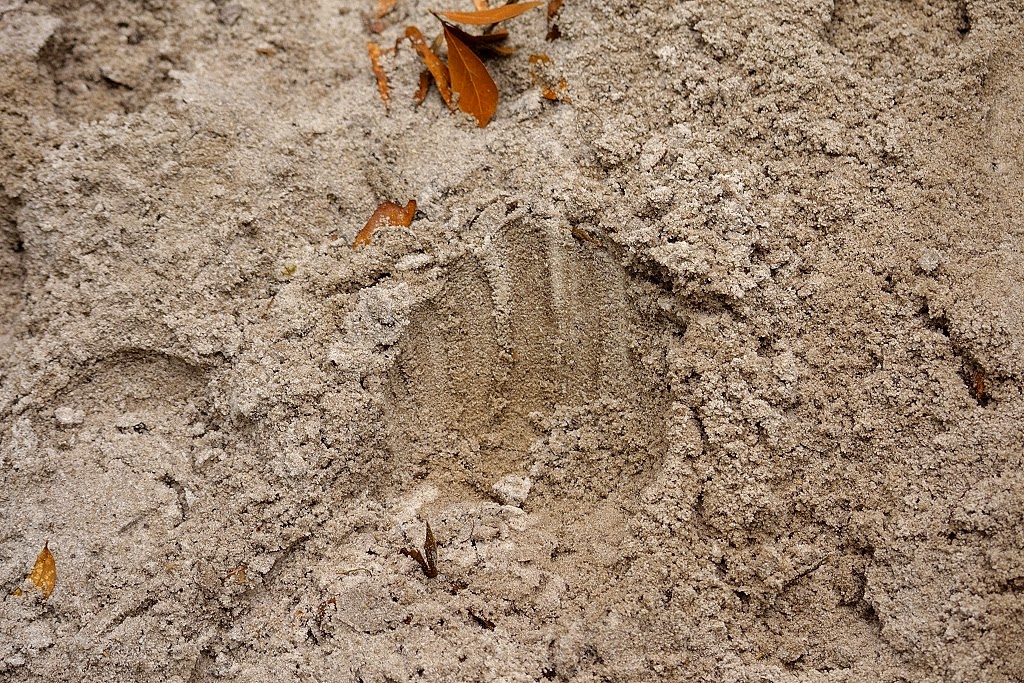 "Well, skunk apes and some Sasquatch as said to smell like rotten garbage, or decaying meat."

I don't smell good, so I didn't smell anything.   Pam smelled this foul odor three times on our walk, but we didn't see anything until the third time.   The third time it happened, I applied my sailor skills and determined the direction of the very slight breeze and pointed to where it was coming from.   Pam saw it!   She asked that I take it's photo.   I took two, and then quickly swapped lenses for my 300mm zoom and took several more, manually focusing to make sure I got the ten foot tall Sasquatch and not focus on closer leaves.   This was the best result. 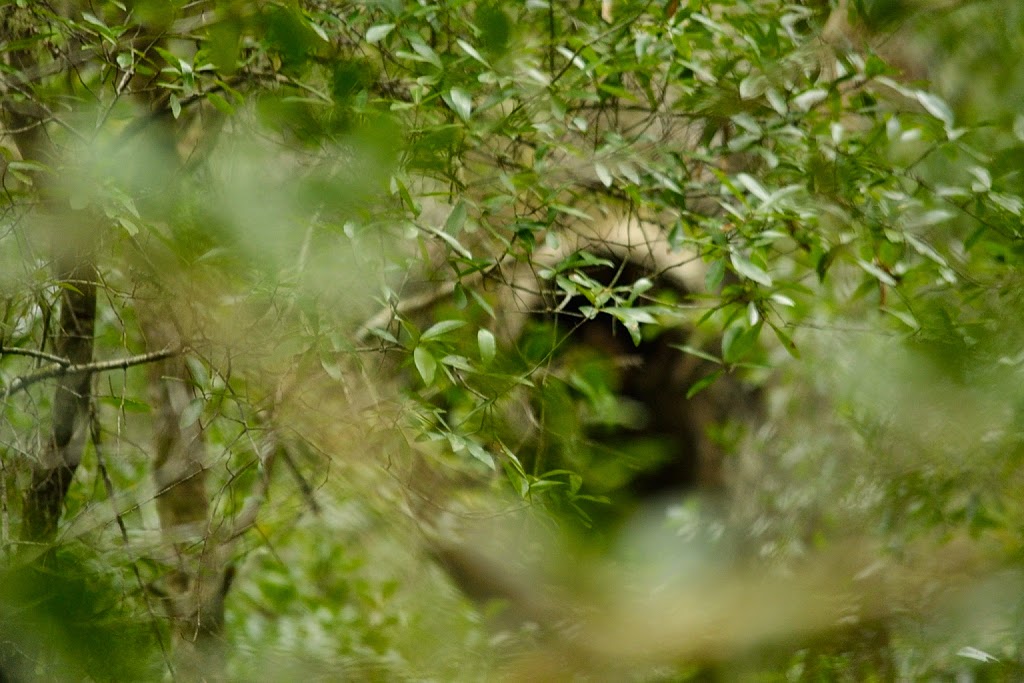 The head, right center.  Yep.  That's it.  Pam complained that its blurry.  No.  I explained that it is in focus.  I made sure when I took it that it was perfect.  I then told her that Sasquatches have a superpower that makes them blurry when being photographed.   Just surf Al Gore's interwebs and you'll see that they're all like that.

Later, walking down a large game trail, we came across this.  It is very similar to the Sasquatch nest we have in Bleecker, but more open.  I guess Florida is warmer.  Sasqautches supposedly build nests by bending down small trees and weighing down the ends with logs and such.  Interestingly, there was a tarp and a tire there too.  Maybe Sasquatches like to collect things interesting to them. 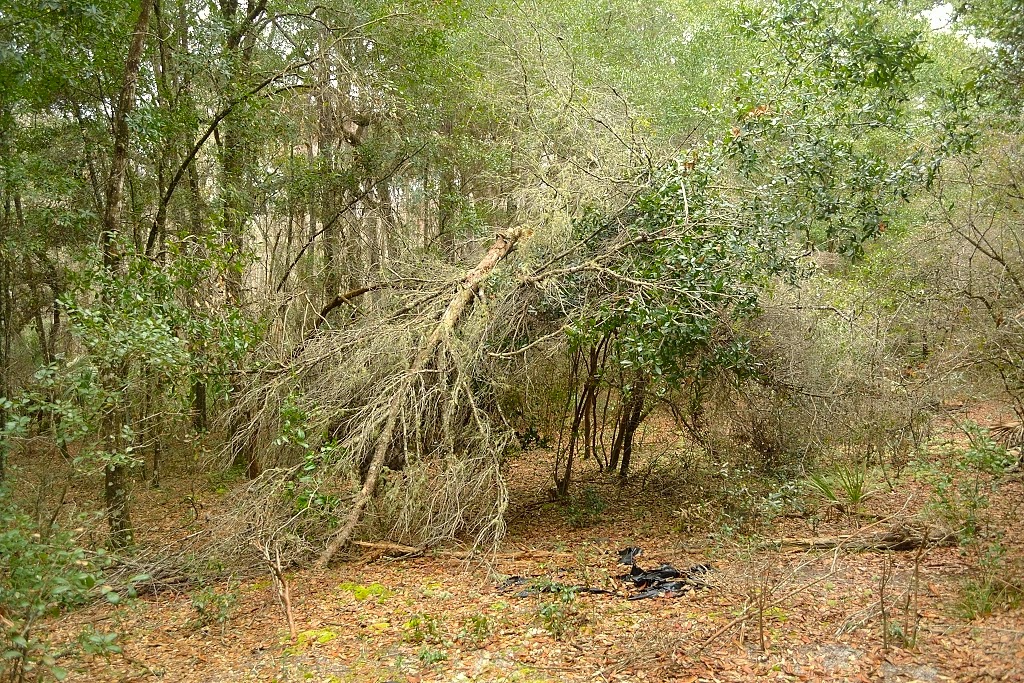 Pam is very observant.  She noticed a broken tree branch about nine feet off the ground. The dogs loved being out. 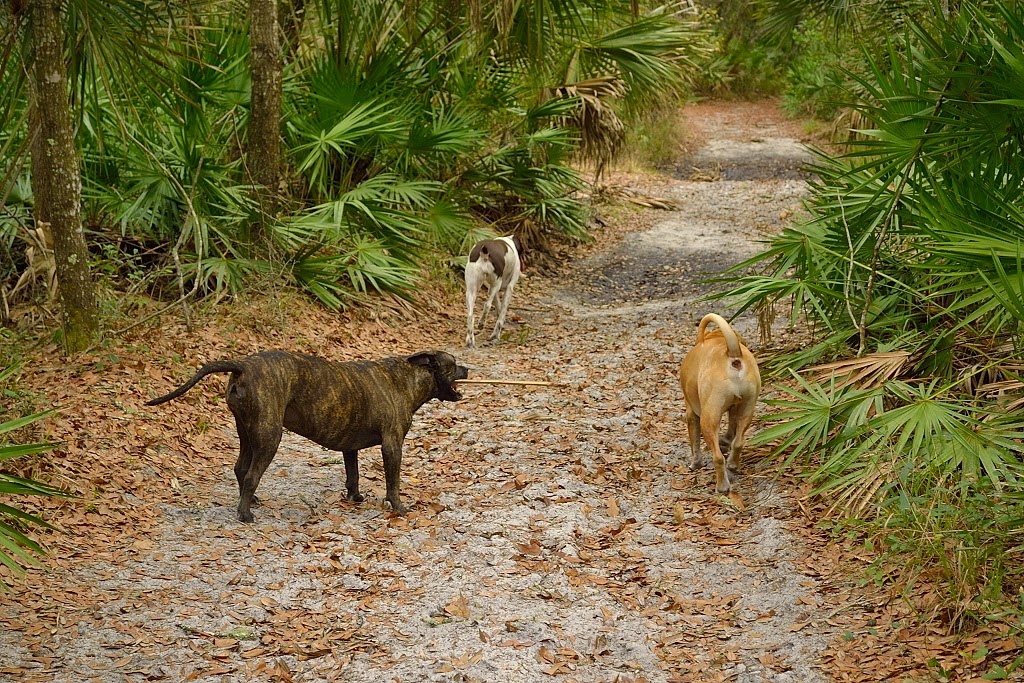 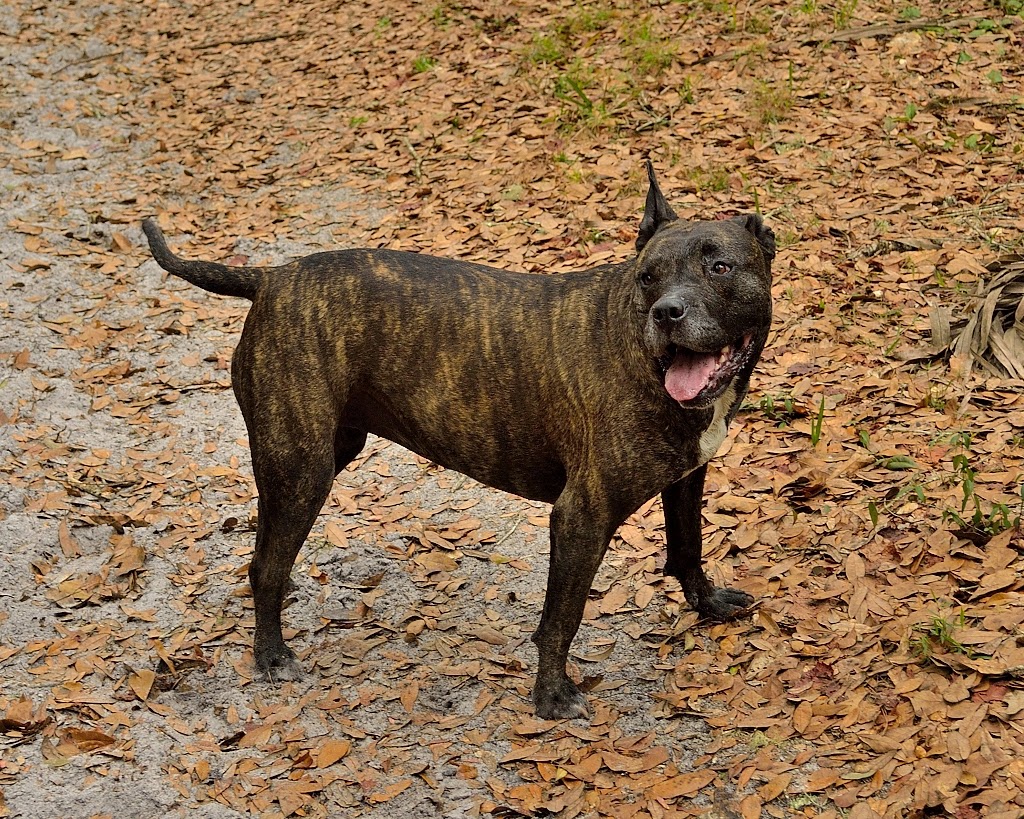 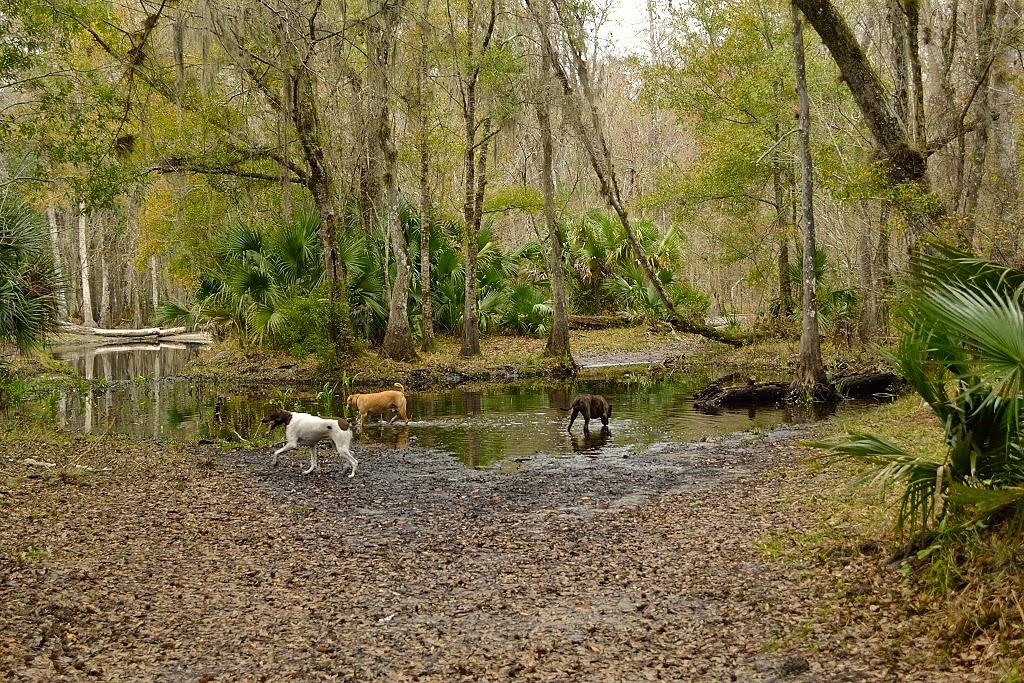 This was an odd assortment of fairly large trees knocked down, and a few were twisted. 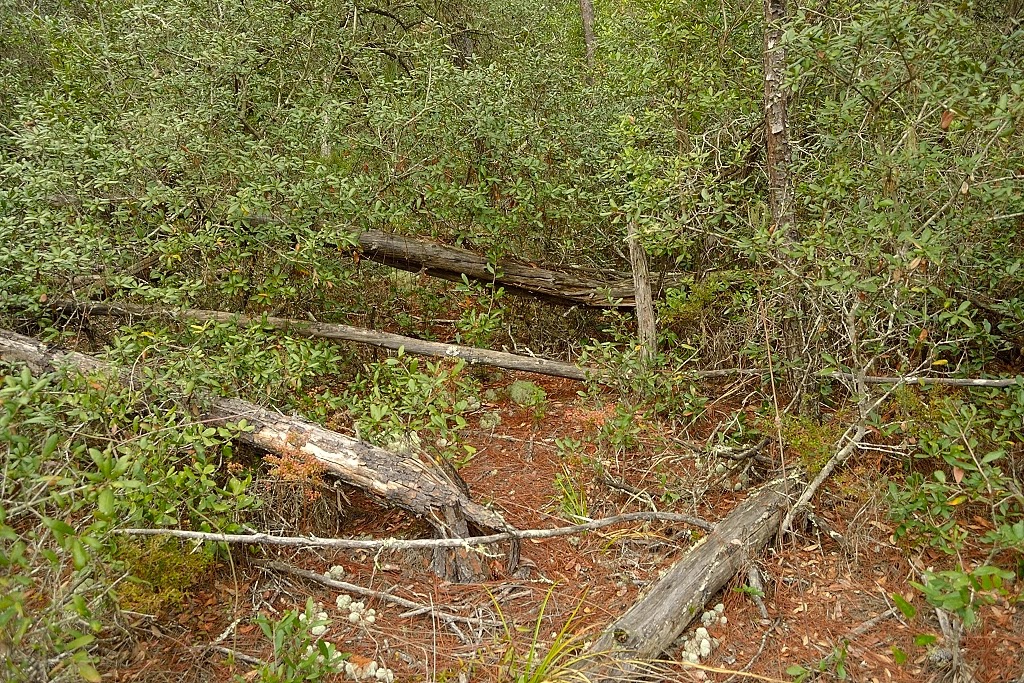 This was interesting.  This fallen tree was hanging over the trail, and about eight feet up, bark was stripped off of a few of the branches.   I thought that maybe it hit another tree on the way down, but there were no other trees in its path. 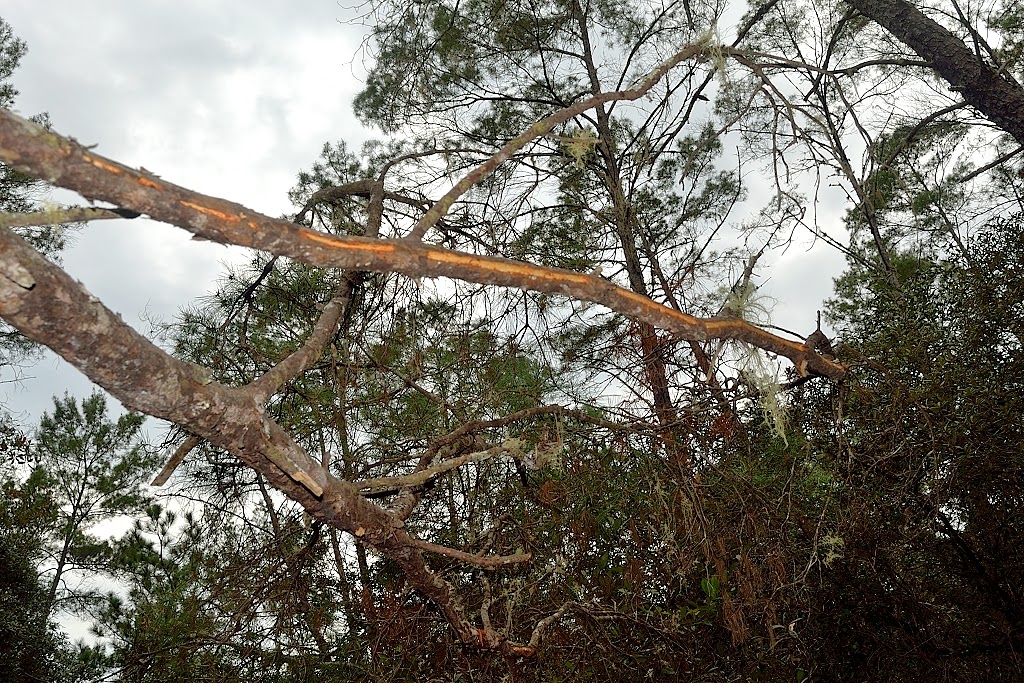 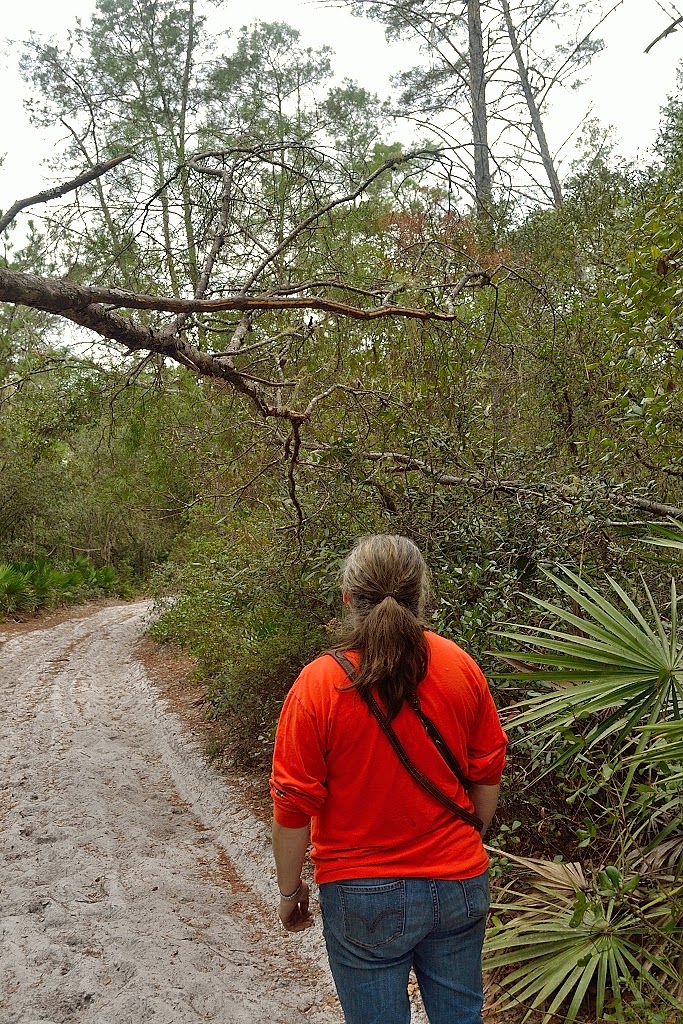 "So?  Its a tree branch that fell and landed in a little tree." 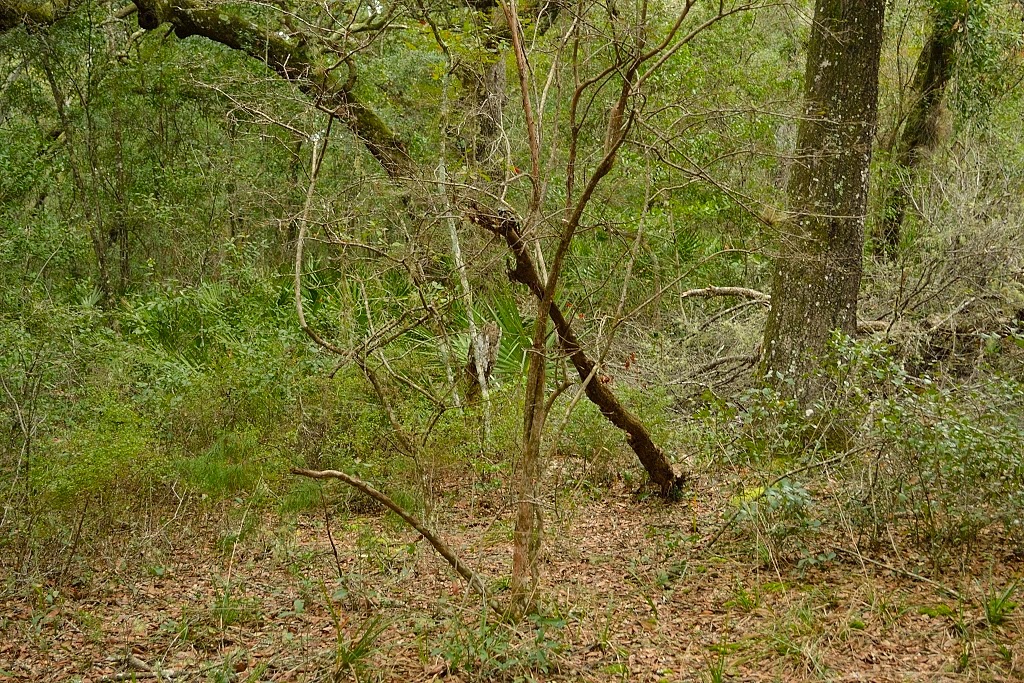 I'm now taking pics of everything.  I  took the one below, not really sure why.  It was only when I downloaded it on my laptop that I realized that the top part of the tree that was snapped off wasn't  around.   Where did it go? 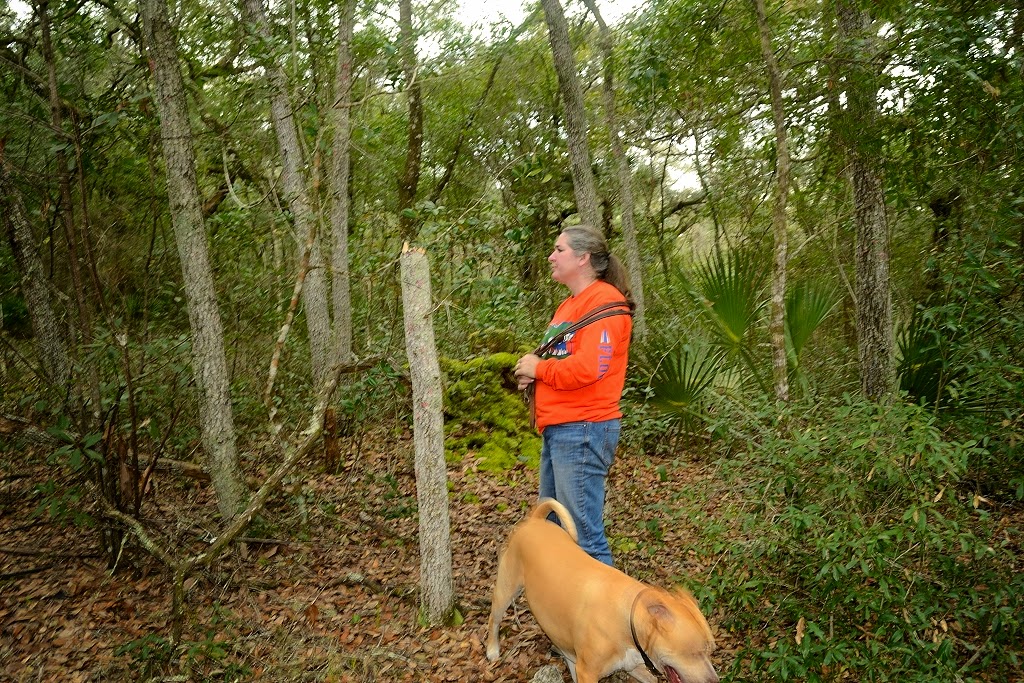 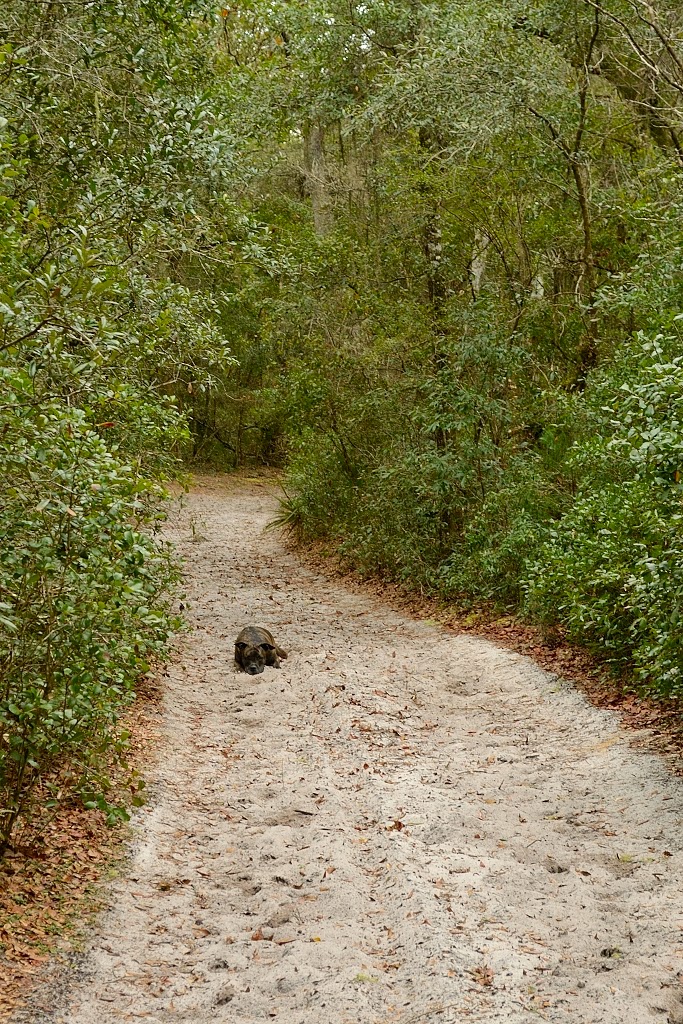 This photo below shows not only how beautiful this  place is, but how dense it is.  If a critter doesn't want to be found, you're not going to find it. 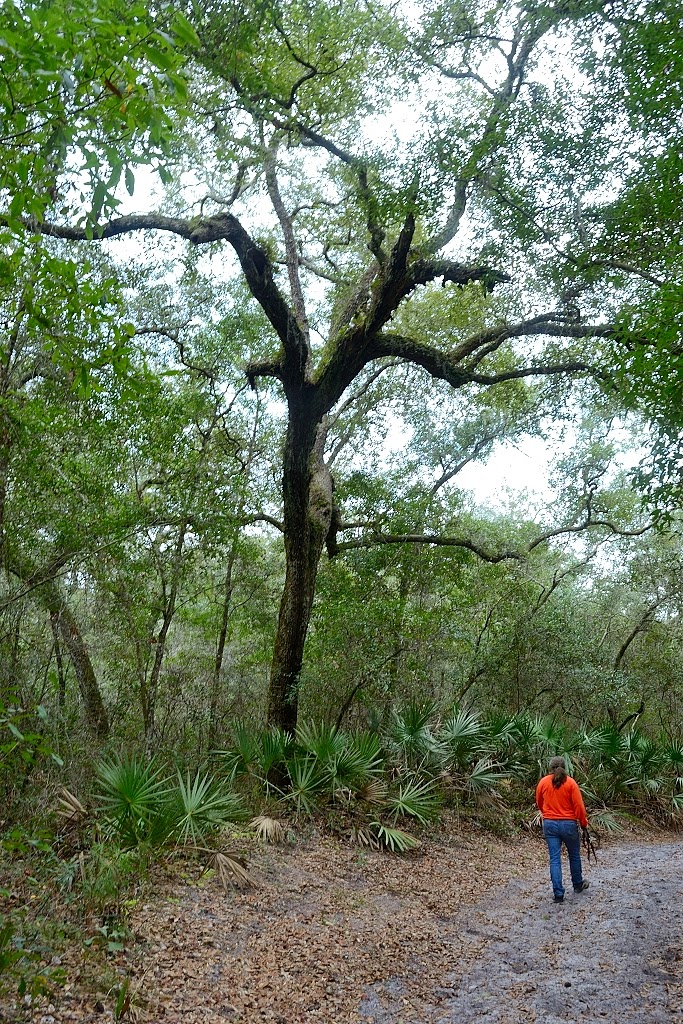 So if Sasquatches and skunk apes don't really exist,  no matter how much I now think they do,  what's the worst of it?  We got to go for a nice walk in the woods.