From Ape to Adam

I decided that since I am now the world's foremost Sasquatch expert, it was time for me to take a break and read something different.   I looked over my assortment of books and picked up From Ape to Ada:  The Search For The Ancestry of Man by Herbert Wendt.  OK, this might be good.

I read the introduction...  I never used to read introductions, but now I'm retired.   I also watch all of the special features on DVD movies.   And then I read this, right at the start of chapter one...

"A silver bowl from an Etruscan grave is the earlist evidence we have today of an encounter between civilized man and his nearest relations in the animal world.  It was found in ancient Praeneste, in Latium, and according to the archaeologist Ludwig Curtius is part of a whole series of dishes of Phoenician and Carthaginian origin.  Its outer frieze consists of an almost cinematographic series depicting a most remarkable being, which can be seen most clearly in the illustration on the right.  This creature walks on two legs, is clothed in hair, is solidly built, and has a massive skull.  It is carrying a stick in one hand and is throwing a stone with the other.  The artist seems to have known this being well;  for both its physical proportions and the typical attitude of attack leave no room for doubt that it is a great ape, perhaps a gorilla, which is depicted here." 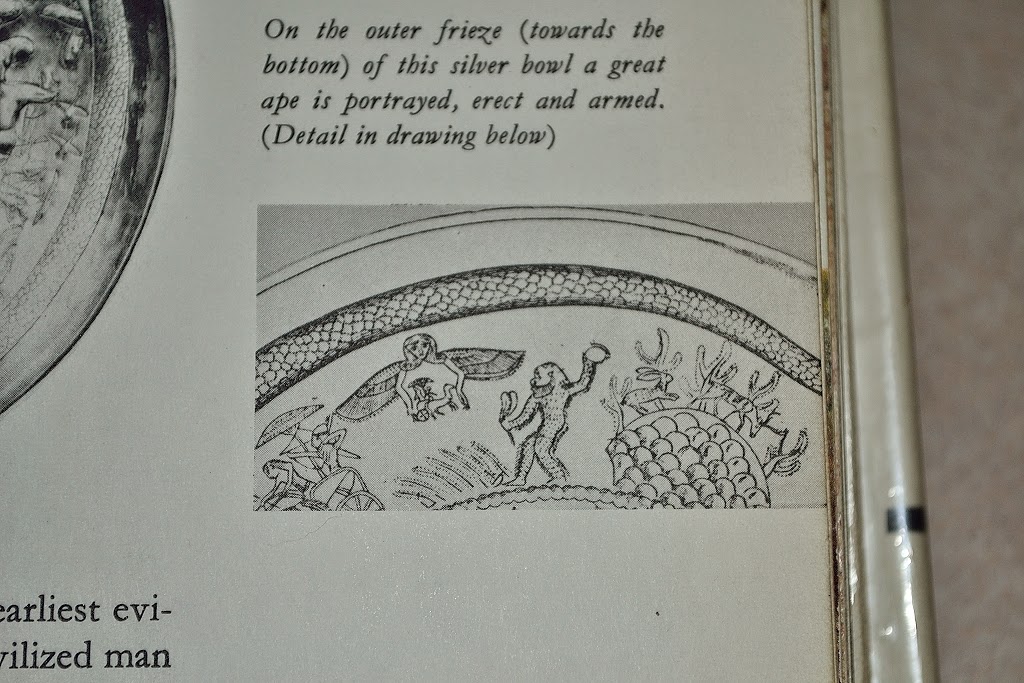 "Similar figures are portrayed in the work of other ancient cultures, such as the killing of a 'wild man' on a dish from Cyprus, a Babylonian terracotta of the demon Chumbaba,with the head of an anthropoid ape, and many representations of man-like ape-gods from ancient India  That the great apes, at least, were considered not animal but half-human in the ancient Orient is evident from a report written about 525 BC by the Carthaginian mariner Hanno, which is the earliest authentic but by no means sole evidence  we have of encounters with such creatures.  Hanno tells how he came upon 'forest people in animal skins' on the coast south of the present-day Cameroons, 'among them many women with shaggy heads whom our interpreters call gorillas'.  The legend of the furred man Eabani in the Epic of Gilgamesh, has its significance too.  The demi-god Gilgamesh kneads Eabani out of a forest animal and goes on to conquer the world with him as a companion."

Look at the photo above.   Sasquatches are thought to look like that, and whack things with sticks (or, in my case, with a tree) and throw rocks.  Just like that.