All Critters Great and Small

Pamela and I are both animal lovers.  Pamela probably even moreso than I.  It shows.

Yesterday we started out by going over to Judi and Earl's house to feed Jeremiah.  Even though he's got a winter coat of fur, Pam put a horse blanket on him because it's been down in the single digits.  As I'm writing my first draft of this blog at 11 PM on Friday night, it is 8 degrees already.

Pam said that when she first approached Jeremiah with the horse blanket, he recognized it immediately and trotted over and put his head down so Pam could put it on him. 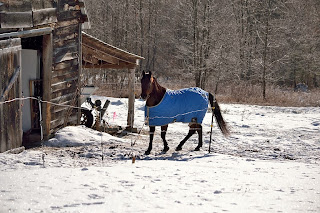 Jeremiah is a classic Morgan.  He's built like a tank, and weighs in at around half a ton.  The Morgan is one of the oldest American horse breeds, from the late 1700s.  Morgans are known for their intelligence, speed, and endurance and were often used for harness racing in the 1800s. 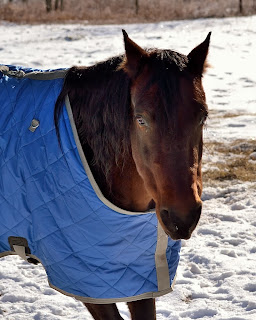 It was very cold yesterday morning, and frost covered the trees. 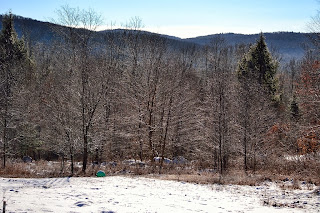 Before we left to return to our Unabomber cabin, Pam picked up Fat Albert, the Chorkie (half Yorkie, half Chihuahua).  He's about 8 weeks old now and getting around pretty well.  Albert weighs in at a pound, maybe two.

As you can see, our three dogs had to give Albert the sniff test, probably to determine exactly what he is. 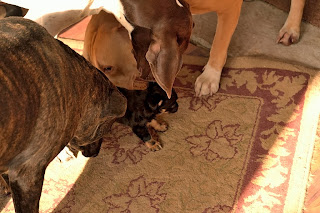 Albert is about the same size as some of our dogs' toys, which concerned me. 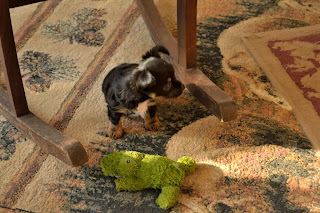 Back to the sniff test. 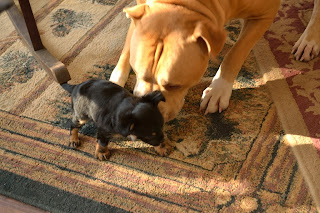 Ruby, our female pit bull, finally had enough and shoved Chevy and Olivia away.  She then watched over Albert to make sure no harm came to him. 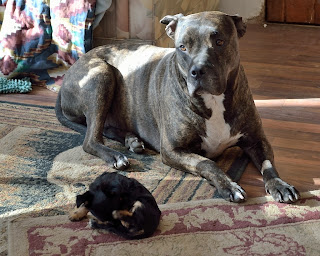 Can I have an "awwwwwwww!"? 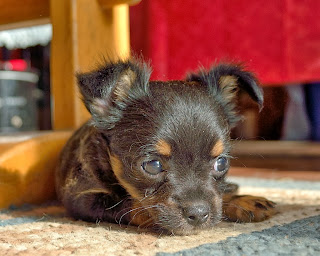 So, you're all wondering... is Albert the latest addition to our menagerie?  Truthfully, I don't know.   I put my foot down and gave Pam a resounding "NO!!!  I forbid it!".  Just as I did with Chevy, Olivia, Sassy, and Leo.   But then, what do I know?  I'm only the doorman for the critters.