Just exactly what is "the good life"?  It means different things to different people, I suppose, since no two of us are alike.  To me, this is the good life.

My old chain saw... I have no idea how many trees this saw has cut down, but it's considerable.  Look at the bar.  It it totally worn out.  I need to buy a new one. 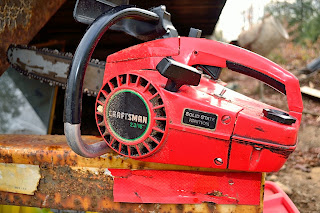 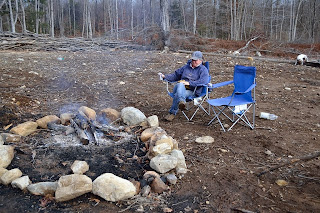 This is our FTS (Firewood Transport System).  It's about a mile from our property to our Unabomber Cabin, so we can do this. 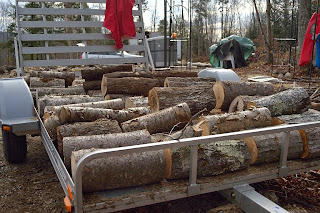 This next photo was not staged.  I just happened to look and there it was, Mr. Leo Pard sleeping on a classic Living the Good Life by Helen and Scott Nearing.  It's been said that this book resulted in the hippy back-to-the-land commune movement in the late '60s and early '70s. 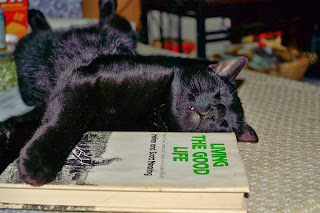 Besides my classic old chain saw, I also have my classic old splitting ax.  This ax has jaws that help separate the two halves of wood.  Pam was skeptical, but now she's a believer.  As it turns out, my neck injury is healing more slowly than I thought.  There's no way I can do this yet.  I carried the split firewood into the nearby shed and I'm paying for it now. 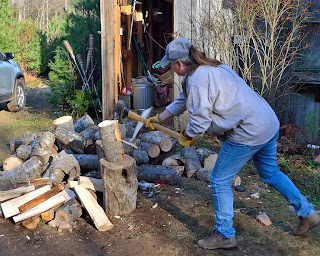 And finally, my gripe of the day.  This container of peanuts was just opened.  It is half full.  I do not want to hear that the contents have settled due to shipping. 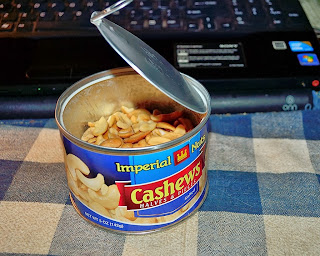 This is nothing more than a complete and total rip off.  Do NOT buy Imperial Nuts cashews!  If it was an honest company, their can would be the size of a can of tuna fish, which are now half the size they used to be as well, and I don't know what's in there, but it is not tuna fish anymore.  It is some kind of pressed yucky fish stuff.  We no longer eat tuna fish.

That simple can of cashews is symbolic of what is wrong with life today.  This is dishonest.  It is time to return to the good life, when times were simpler and people cared about themselves, and what they did for a living, and what they manufactured and sold to others.  A time of honesty.

Sadly, it seems that honesty is sorely lacking these days.

Oh, a final note!  Baby Hope has gone to the vet and has gotten an almost clean bill of health!  Laurie reports that the vet says that Hope is 8 or 9 years old, and does not have cancer.  Here is Laurie's report on Baby's vet visit:

Update on Baby: she went to the vet tonight. The good news is that the mass on her abdomen is just a lipoma. She's got her first round of shots. The bad news is she's super Lyme positive. That could be contributing to her stiffness. She'll be on doxycycline for a month. Other than that, so far it's a clean bill of health. Blood work will be back in a few days. She went through the whole vet experience like a trooper!

Thank you Laurie and Jim for taking in Baby.  We would have kept her, but living in a motor home for several months for an old dog is nowhere near as good as a stable, loving home.  I grew attached to her in the few short days we had her, but she's in a much better place with you.