It's a Dog's Life

I prattle on and on about our dogs all the time.  Sorry.  But I love animals, and these are the first dogs I've ever owned.  My parents wouldn't allow me to have a dog when I was a kid, and then I didn't as an adult because dogs aren't allowed at the yacht club I belonged to.  I'm not a kid, no longer go to that yacht club, and so now I have dogs.  And two cats, and a horse.

Ruby is the best dog EVER.  But don't touch her paws.  Pam had to bandage one of Ruby's rear paws, and afterwards Ruby barricaded herself under a table and behind an ottoman. 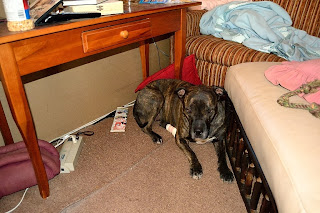 We have one sofa dog proofed with old blankets and pillows.  It gets sunshine, which the dogs really enjoy.  Below is Olivia the German Shorthaired Pointer and Chevy the pit bull.  Tough life, eh? 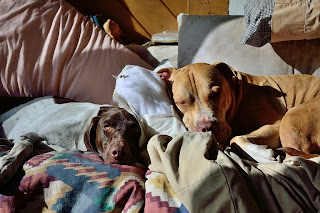 This is kind of embarassing.   You know how dogs like to roll in stinky stuff?   Well, Olivia LOVES to.  What she's rolling in below is a laundry basket. 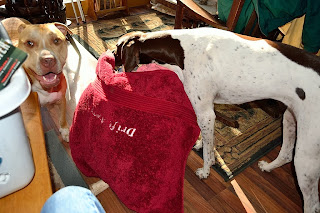 Ruby will eat anything.  Anything.  In the pic below, she wanted some of the Wasabi green peas I was eating.  I really didn't think she'd eat any, so I put a few on the bench in the pic below.  The first one she put in her mouth and then spit it out, but then she ate it.  She wanted more.  I gave her a few more and she woofed them down.  I gave her more, and more.  Unfortunately this was not a good idea, and she woke Pam up at 2 AM with an urgent need to go outside for a potty break. 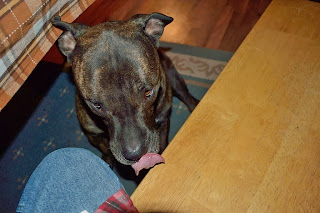 In the pic below, Ruby has assumed the "awwww.... Ruby died" pose on the dog couch. 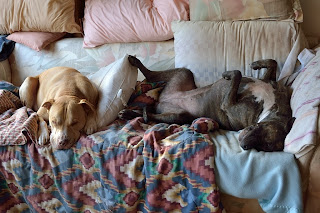 Yeah, I love dogs.  Their lives are simple and uncomplicated, and they like nothing more than eating and sleeping.  I guess it's just envy.