By asking around, we found out that Hope's real name is "Baby".  Her owners moved away mid-summer, so she's been living outdoors under that pine tree for several months.

Pam, who was a vet tech, looked at her teeth and figures she six to eight years old, tops, but she acts like a much older dog.  She has issues with her rear suspension.  We were concerned because she wasn't eating or drinking much, if at all, and rarely went to the kitchen to get to the food. Then, at 2 AM, Pam heard a ruckus downstairs.  When she went to investigate, Baby was on the bare floor and couldn't get up because it was too slippery.  I have since moved a food and water bowl to a carpeted area, and she ate some and then drank the entire large bowl of water.

How anyone could simply abandon a sweetheart of a dog like Baby is beyond me, especially leaving a possibly arthritic dog outdoors to fend for itself.

In the pic below, Pam is cutting off the worst of Baby's matted fur, and this afternoon will take her to a friend's house to get shaved. 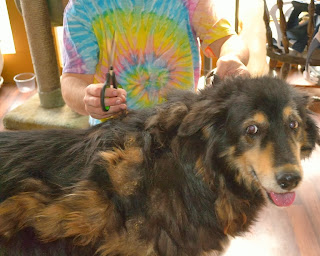 If anyone is considering adopting this sweet old lady, it should be a home with carpeting and no stairs.  Please spread the word.  We will not put her in a shelter and will keep her if we have too, but we already have three dogs, two cats, and a horse to contend with.  She's an easy keeper and is now smiling all the time, as you can see in the photo.
Posted by Dave Gibson at 9:01 AM