I think I have altitude sickness.  After several years of living at, or close to, sea level, living at a mere 1,750 feet above sea level makes me unsettled.  I haven't had a lot of vim and vigor (exactly what is "vim"?), but I was determined yesterday to be productive on our Bleecker property.  I was there at the crack of 11:30 AM.

I'm still weak from my Sasquatch tree attack incident, and after a dozen pulls, was exhausted.  It has a battery and a starter... why not use that?   I looked in the battery.  Bone dry.  I added distilled water.  Now the  battery needed to be charged.  I have a battery charger, way over there.   We have one source of electricity.  Solar panels.

If, for some odd reason, you haven't been following this blog religiously... we are off grid.  And we have no intention of being on-grid.  In the pic below, you will see three inexpensive 15 watt Harbor Fright solar panels sitting on a pallet, connected to a controller which is connected to the battery out of my dump truck. 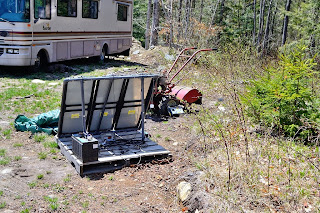 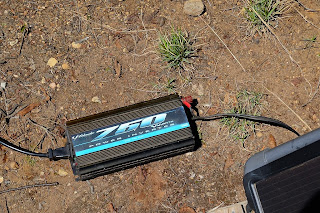 And to that is connected a battery charger, hopefully charging the small 12 volt battery on the rototiller... 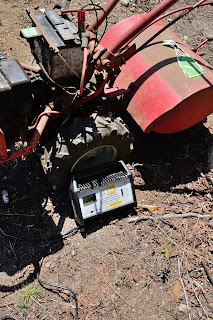 which right now is nothing more than an inanimate object. 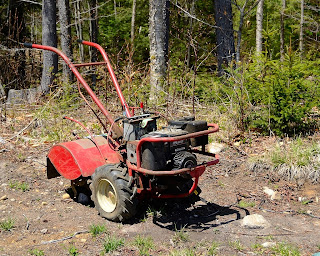 Since Tilly was out of order, I decided to fire up a chainsaw to cut fallen trees where Jeremiah's pasture will be.  Nope.  Neither one would start, so I set them back on the diesel generator that runs but doesn't generate power.  I looked at my various chunks of metal that weren't doing what they were intended to do.  The tiller, the saws, the generators... all simply inanimate objects.   It was a beautiful day.  What to do?

I decided to become an inanimate object.  I grabbed a Sasquatch book, a beer, and sat on the deck. 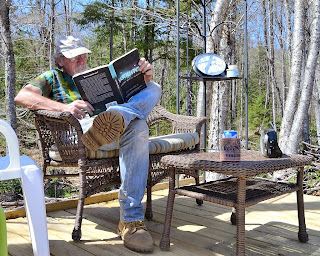 And yes.  Late in the afternoon, Pam (who returned from shopping) and I heard two Sasquatches called to each other.  They were far away, on the other side of the Stony Creek valley, but even with my bad hearing, I could hear them.  It made me smile.

Sasquatches don't have to deal with inanimate objects.  Like dolphins, they are obviously superior in intelligence.
Posted by Dave Gibson at 5:28 AM