My father-in-law, Earl, has it right.  Things you buy today are cheap Chinese made junk.  Total crap.

But first, a couple of cute photos of Ruby and her goats. 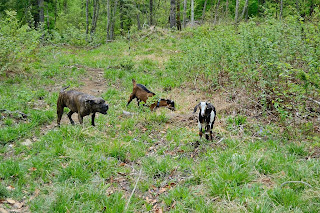 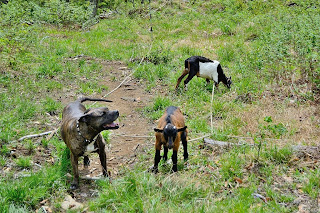 Make no mistake, these are Ruby's goats.  She took stewardship of them immediately, and barks Ruby commands to them.... what Ruby wants, no one knows.   But she is getting good at it, and is able to sort of herd them.  Yesterday Amos, the brown one, got loose and up it wandered towards the screen house with Ruby right there barking at it.  Ruby doesn't quite have it down yet as to turn the goat to get it where she wants it to be, but she's getting close.

Meanwhile, Earl came over and brought me a roof for the screen house, mine being ripped from removing it the year before.

"I'm getting tired of being eaten by black flies", he said.

So even though I have a new roof on order, I stuck on Earl's roof and then hooked up the new screens.   This is a Christy gazebo bought two years ago at Home Depot for $199.  I was really disappointed that the whole thing fell apart after two years, especially considering that the canvas spends half of the year in storage and out of UV, but fall apart it did.

Anyway, while waiting for the new roof, I hooked up the new screen.  This is what I got. 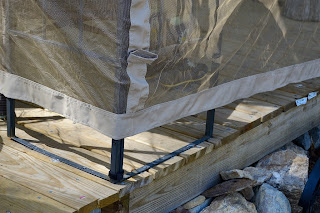 This is a Christy netting made for a Christy Gazebo.  Yes.  It is not only six inches too short... 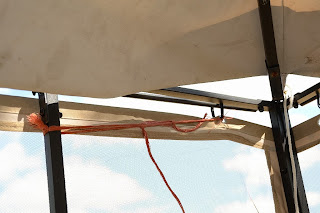 But it is not 10 x 10.  It is about six inches short of that.  I had to use baling twine to stretch the nylon enough to zip it, as pictured.  I do not know what I will do about it being too short.

Seriously, why do we tolerate crappy Chinese made junk?