Putting the Ridge Cap on the Pump House

YAY!   The pump house roof is finished!  The last thing to do was to put the ridge cap on, but I didn't want to do it without someone there.  I crawled up on the roof to screw the roof on and it made me nervous.  Enameled metal roofing is as slippery as a waxed playground slide.

Pam started it, but she's afraid of heights and lost her nerve despite that would award her six bravery points for doing so.  So up I went.  It all went fine with me straddling the ridge, screwing in the screws to hold it down.  And then I got charlie horses in both legs!  OWWWWWW!   I stretched out as best I could until they eased up. 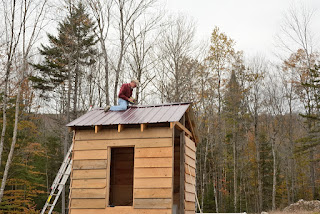 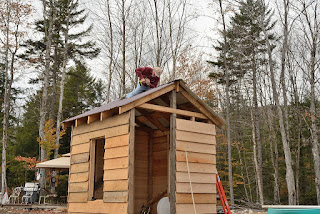 The only things left for this year are shutters for the two windows and the door, put plexiglass in the eaves, and it is done.  Next year, I'll insulate the roof and walls and cover with 1x10s, build a cover over the well, build a support for the water tank going up by the roof, and plumb in the shallow pump well.  Then it is done done.
Posted by Dave Gibson at 7:34 PM