Yesterday, we had a call from friend Bill.  Someone apparently dropped off a dog at his house.  It was hiding under a carriage in a shed.  Pam grabbed Ruby (the world's smartest pit bull) and headed over there, but on her way out the door I shouted "DON'T BRING ANOTHER DOG HOME!!!"

So fifteen minutes later, she came in with a small pit bull that had apparently recently had puppies. 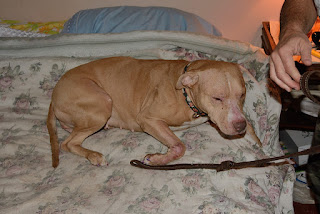 The poor girl was scared.  Pam put her upstairs in our bedroom and shut the door to keep our other three dogs from overwhelming her.  After an hour or so, Pam got her out.  She had her head down and her tail tucked between her legs as she was inspected by our dogs.  Pam fed and watered her.

I posted a "found dog" post on Facebook, which has been shared by our friends many times over, but no luck yet finding the owner, whom I'm guessing doesn't want her anyway.  Bill's house, is very remote, so the chance of her wandering there on her own is pretty slim.

The Mayfield dog warden thought she may have a lead on the owner, but so far no call.  The Bleecker dog warden doesn't have any report of a missing pit bull.  So if we don't find the owner soon, it looks like Lilly (she was found on Lilly Lake Road) will be traveling to Florida.

Thankfully, she's a very sweet dog.  Very affectionate and full of kisses just like our pit bulls.  Sadly though, her toenails are painted purple.   Some little girl somewhere is probably crying her eyes out.
Posted by Dave Gibson at 8:25 PM