The day started out normally.  We bid our adieus to the Cheers Ranch and made a fairly short hop to Lakeview Plantation  in South Carolina.  The trip was uneventful, except for a very rough SC 321.  The inside of the RV reminded me of a mini version of Drift Away off Sandy Hook. 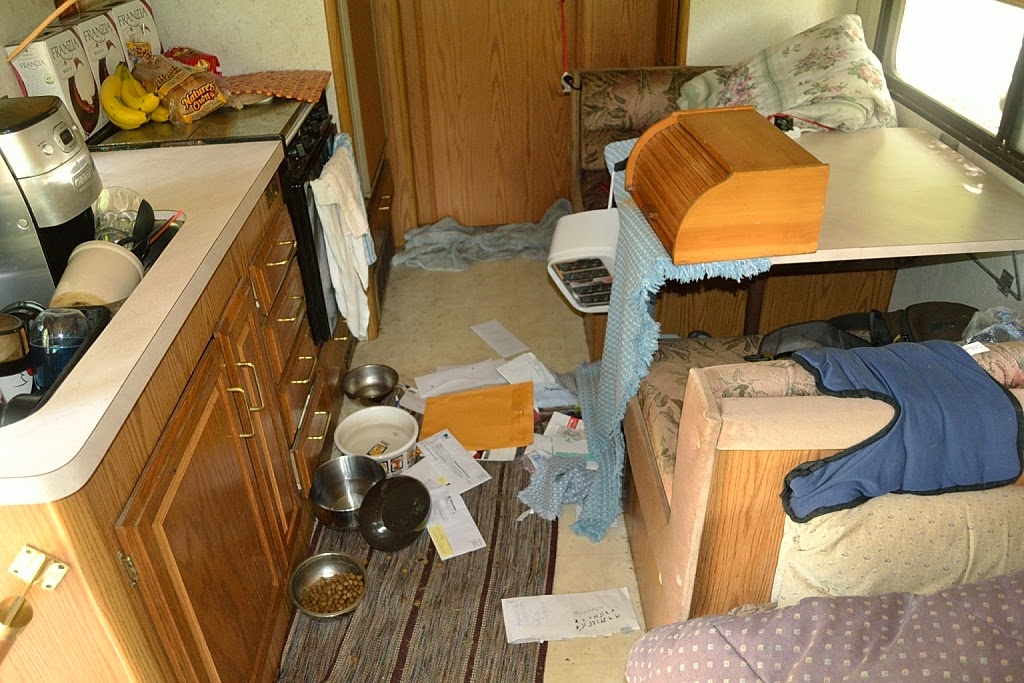 You may recall that we stopped here on our trip south in January.  We really like it here.  I stuffed RV "the Boat" into some tree branches for shade.  That's the nice thing about owning old stuff.  You don't freak out when you get a scratch. 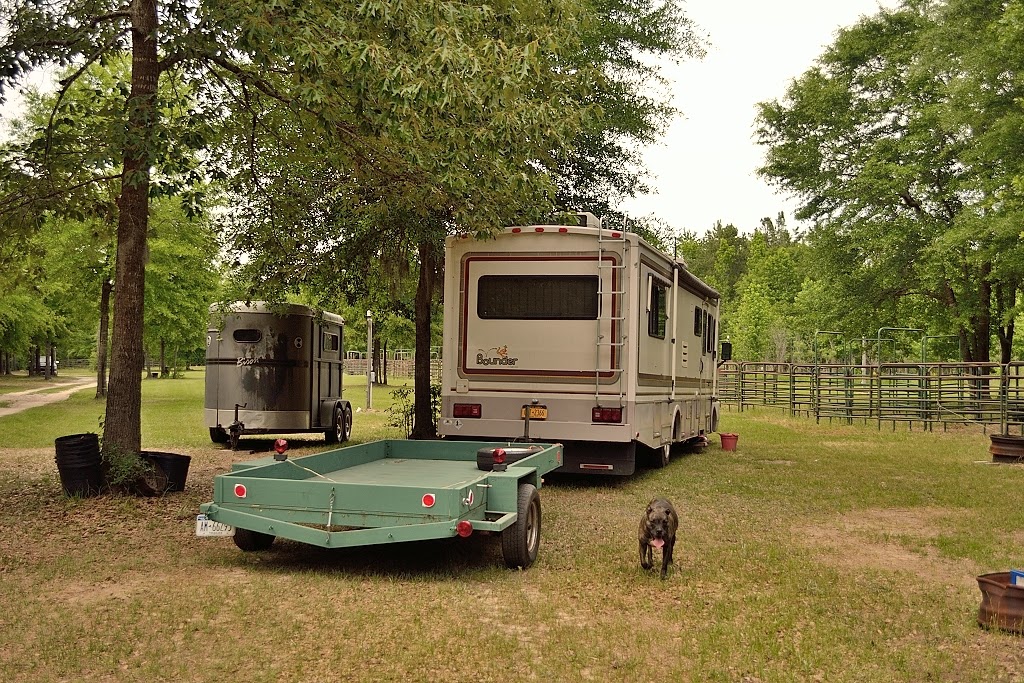 Jeremiah was put in a pen, and Chevy thought he'd try seeing what it would be like to be a horse. 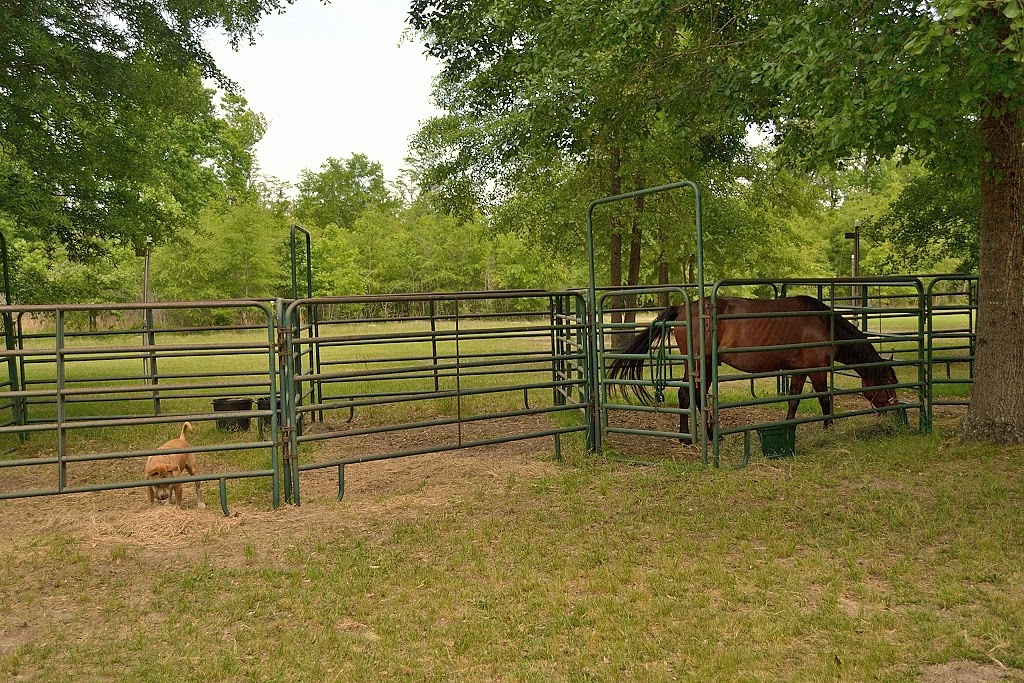 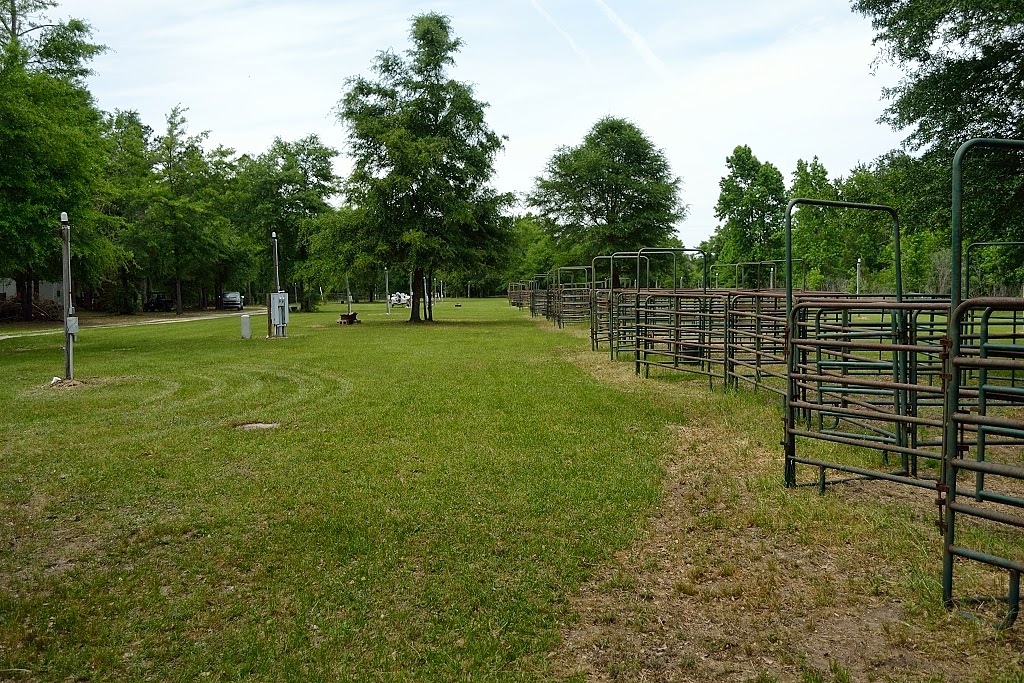 We forgot to pack up lawn chairs when we left Florida and it was a beautiful evening, so Pam drove into town to buy a couple.  While she was gone, I decided to use the floor mop to tackle the love bugs plastered on the front of  "the Boat". 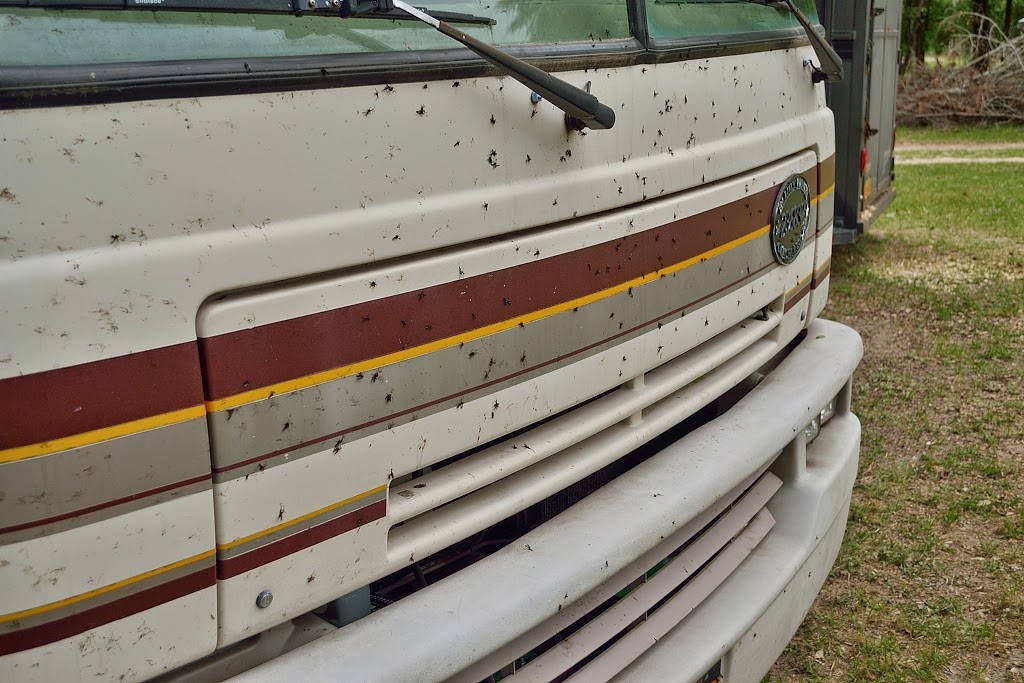 When Pam returned, we ate dinner and sat outside in our new lawn chairs.  Chevy and Olivia were on leashes, and Ruby (the good dog) sat at our feet.  I notices that Jeremiah was banging around his pen.

"Oh, he sees the grass outside and wants to graze."

"Why don't you stake him out and let him graze?" I replied.

And so Pam did.  After ten minutes or so of grazing, Jeremiah's hind foot became entangled in his lead rope.  He whinnied and jumped and twisted and fell on the ground in a panic.  This caused our male pit bull's instincts to kick into high gear, and Chevy charged Jeremiah, snapping his leash in the process.  Jeremiah galloped off in high gear with Chevy hot on his heels.  Pam jumped in the Kia to give chase, and I took off on foot.  I eventually got ahold of Chevy, but there was no sign of Jeremiah.  As I led Chevy the quarter mile back to "the Boat", I saw Jeremiah running off at full gallop down another dirt road.

Dogs have a sense of smell at least 400 times better than humans.  All dogs can smell, but not all dogs can track.  That takes intelligence.  So the next morning, we loaded Ruby in the car and drove to the last place we saw tracks.  I told Ruby to find Jeremiah.   She looked at me with a "why?" kind of look.

She sniffed in the air, sniffed the ground, and trotted off to the left.  She stopped and sniffed somemore.  She turned around and went off to the right.  About a half a mile down the road, she left it to the right and went through the woods, through some heavy brush, and disappeared over a small knoll.

"Ruby!  Come back!  This way!  Jeremiah couldn't go through there."

Ruby came back, trotted down the road, took a bend to the right, and there he stood, very still with his lead rope hanging to the ground.

"Jeremiah.  How are you buddy?"  I said, very softly.  I approached him very slowly so as not to spook him.  He stood very still as I took his rope, and he followed me like an embarrassed puppy dog.  As we walked down the road, Pam approached us in Kia.  She stopped and got out, and the look of relief on her face said it all.

Ruby is an amazing dog.  And we're happy to have Jeremiah back.