Empress and the Pecking Order

We're still dog sitting Empress, a pit bull mix of some sort.  She's less than half the size of our pit bulls, so it must be some kind of small terrier mixed in there, I'm guessing.  But she still has the heart of a pit bull, along with the energy of a Jack Russell Terrier.

To be blunt, she's making our dogs nuts.  She wants to play constantly.  Ruby and Chevy are into play time for ten or fifteen minutes, and that's it.  Olivia, our German Shorthaired Pointer, can go for an hour or two straight.  Empress can go all day.

This morning, after being let outside at the crack of dawn to do their doggie business, the dogs came back in to get more shut eye.  Not Empress.   She slept for maybe ten minutes while Olivia looked on nervously. 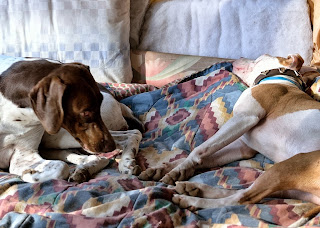 She then wanted to play.  Olivia ran outside, so Ruby was next.  It was only pit bull play bites, but I guess it can be annoying when you want to sleep. 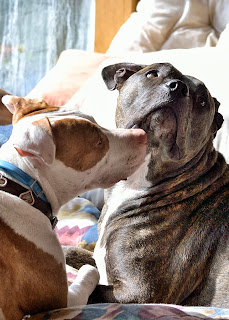 Ruby gave Olivia "the look", along with a raised lip and a low growl that seemed to get the point across. 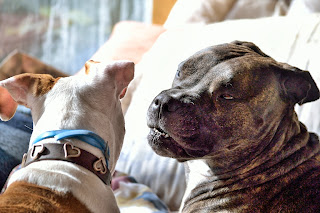 So Ruby laid back down to sleep.   Empress decided to lay next to her.  Once in awhile she'd give Ruby a doggie kiss, which Ruby didn't mind. 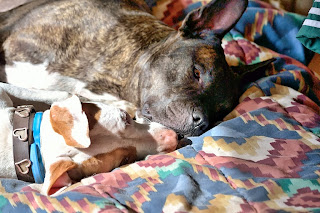 Watching the interaction of these dogs is interesting.  They're pack animals and so accepted Empress, but they have to assert the pecking order.  Empress is at the bottom.  Someone needs to tell her that, though.