My Chase cousins in Florida are a great bunch.  They love to have fun, usually at the expense of a sibling. 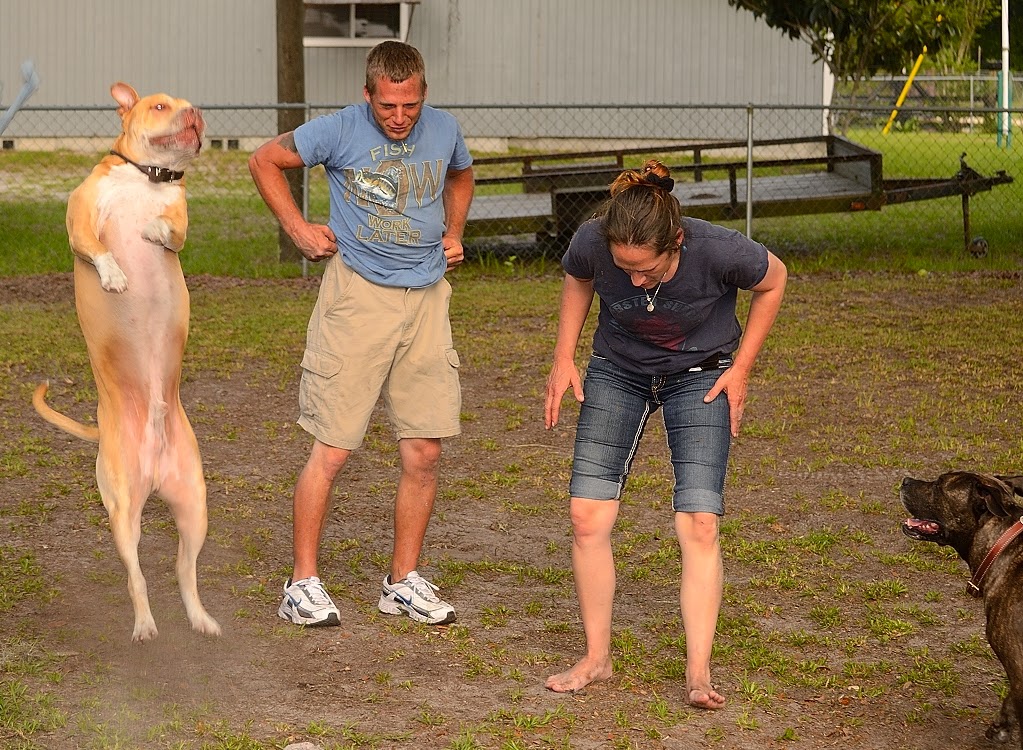 As at most family picnics involving copious quantities of beer, siblings decide to wrestle.  First is the trash talk.  Ruby the female pitbull is watching. 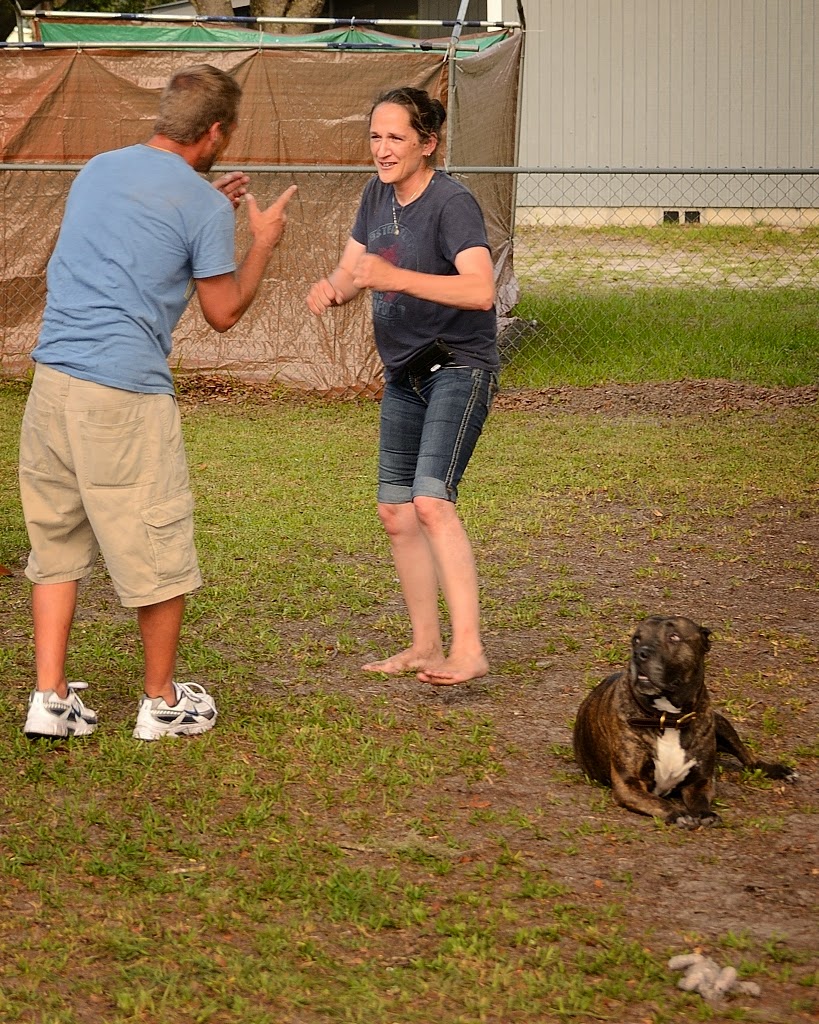 And then the challenge. 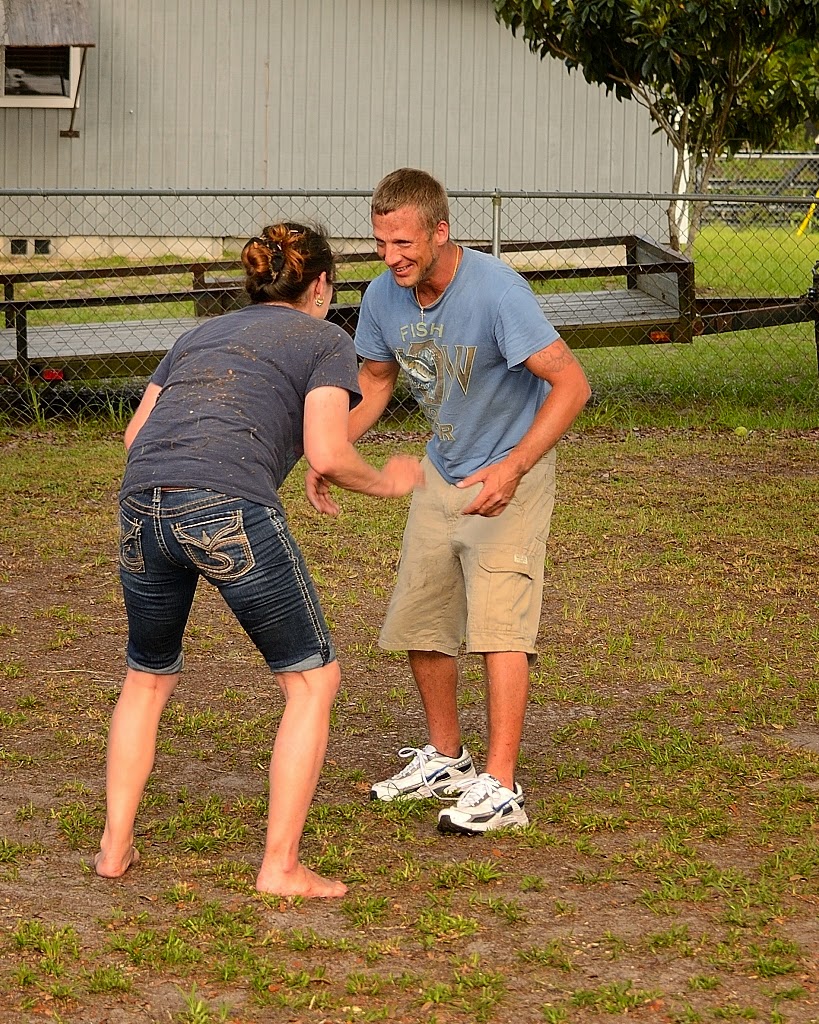 Before I could grab my camera, Frank (in the middle) was wrestling with Chrissy (on the right).  Frank picked Chrissy and bear hugged her, and Chrissy brilliantly executed the atomic wedgie defense.  Frank dropped her.   As he was "adjusting", Chrissy was bent over in laughter.  I snapped a pic, and as I did, someone threw a toy and Chevy jumped for it.  And this pic was the result.  Ah, now you see it.

This was all done under the observation of Ruby. 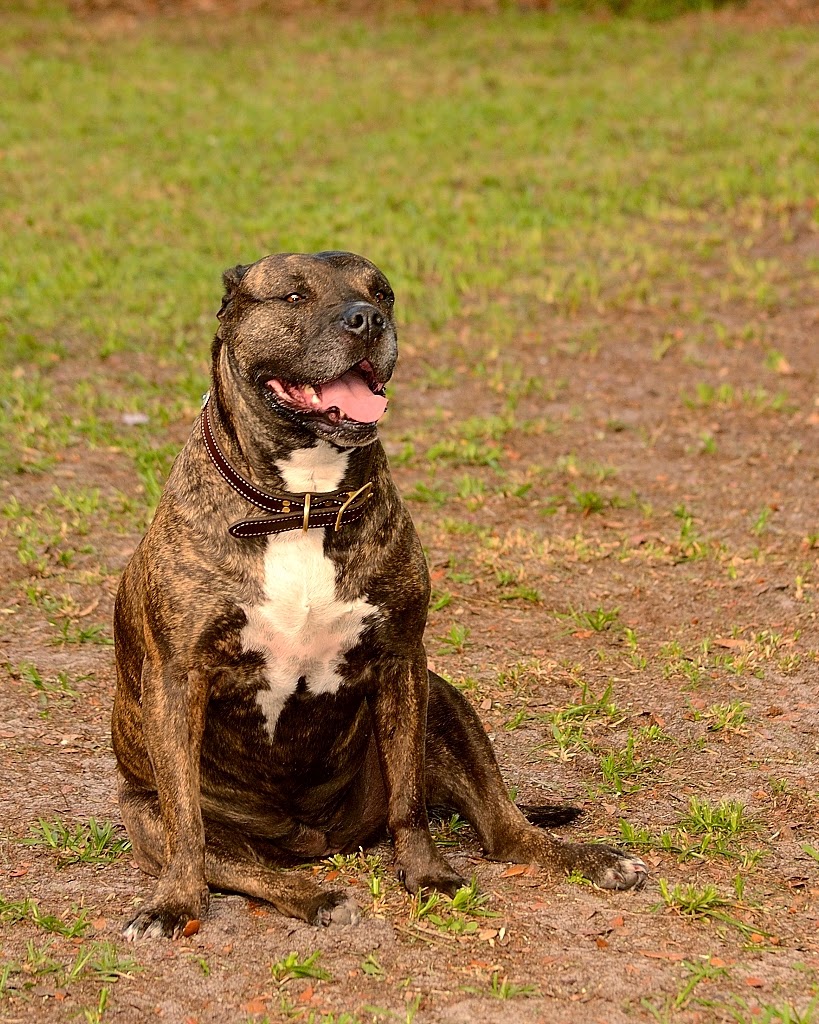 Ruby.   A dog not to be trifled with.  A very protective female pitbull.  Yep.  Here it comes.

We bought a little kiddie pool for the dogs to cool off in.  It was hot, so a few folks waded in to cool off their tootsies.  Ruby went in to lifeguard. 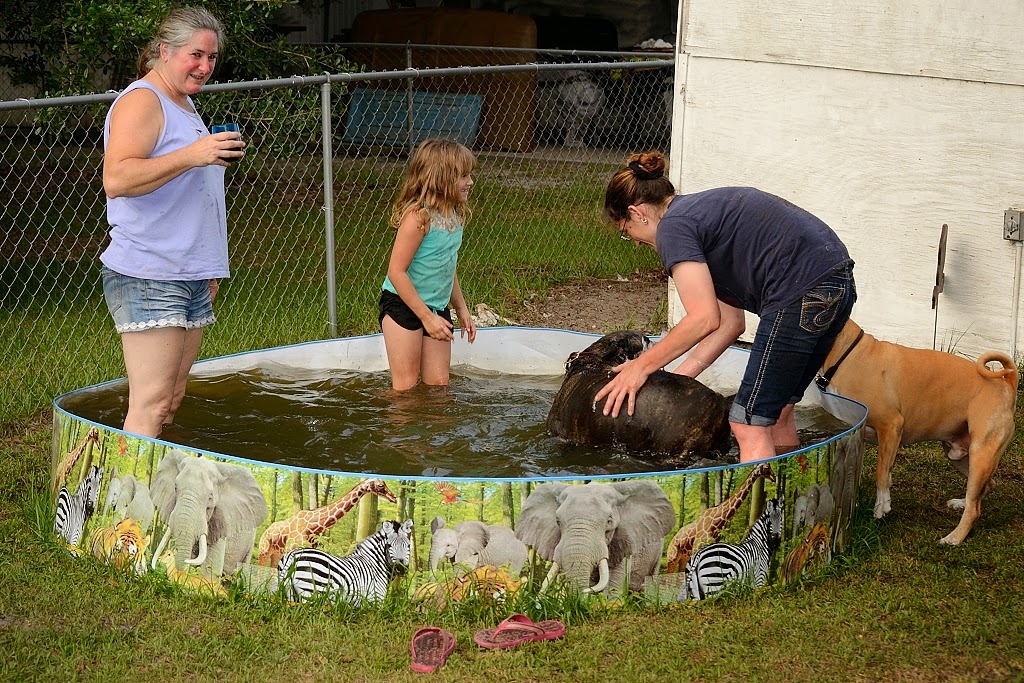 Frank went in to drown his sister.  Frank dunked Chrissy and then ran. 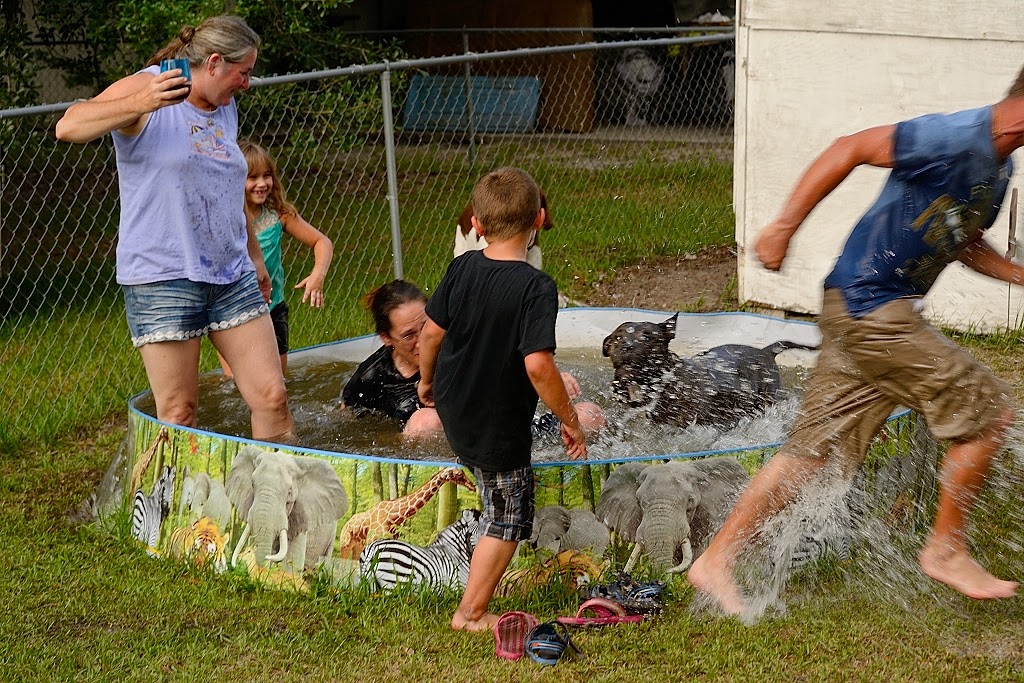 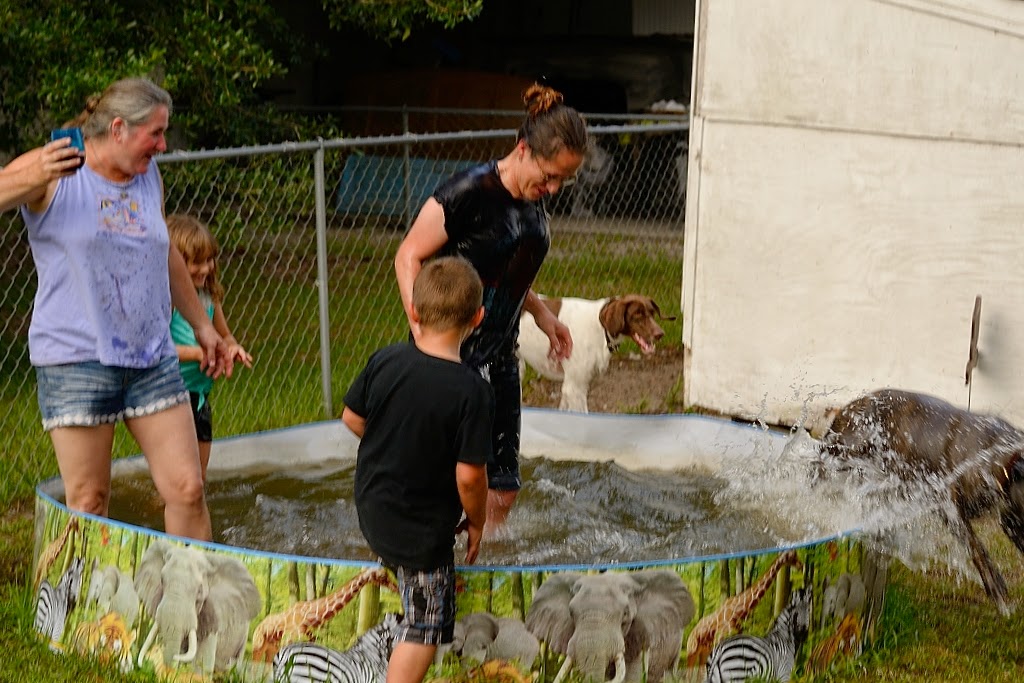 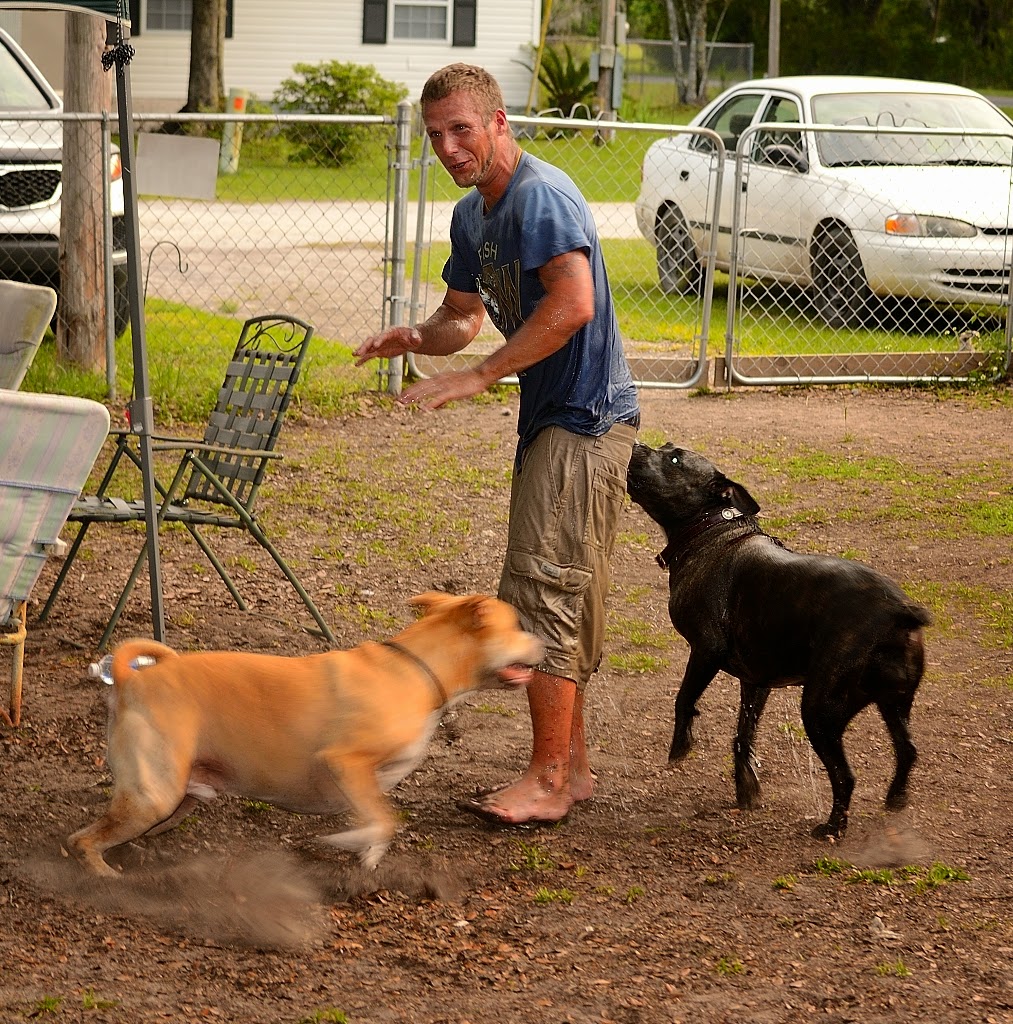 See Frank realizing he's in deep doo-doo with Ruby, and now Chevy is joining in. 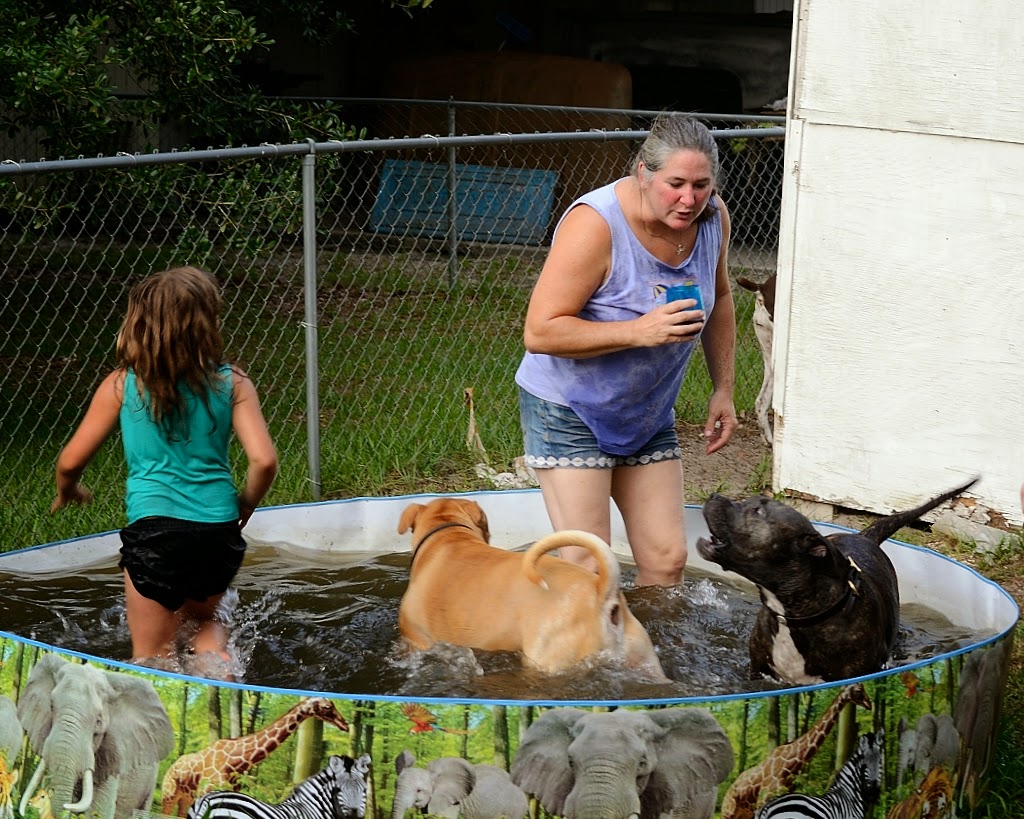 Ruby has decided that no one is to be in the pool.  Everyone out NOW! 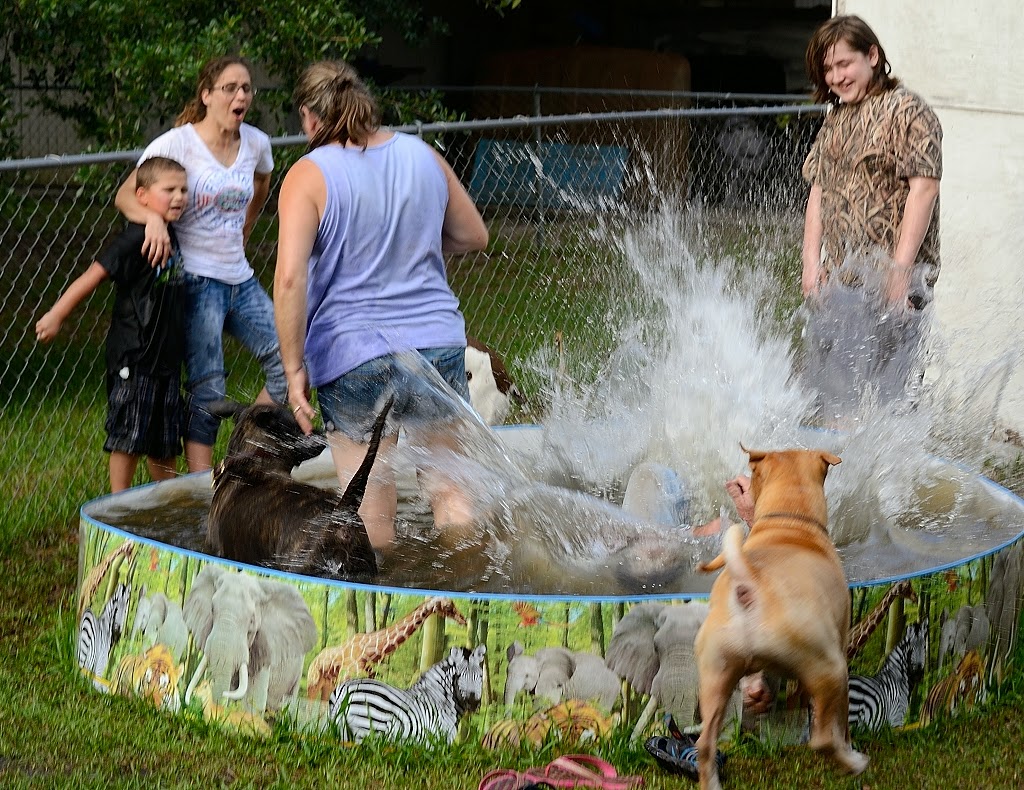 That would be Denny doing a cannonball into the kiddie pool. 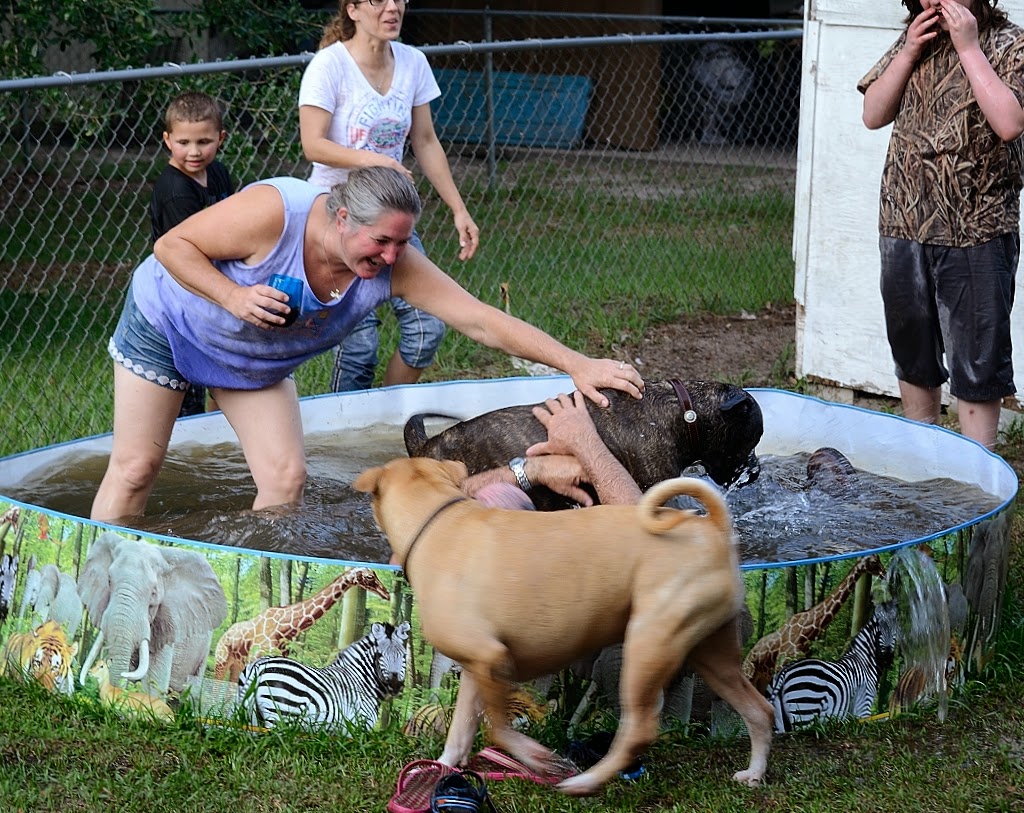 Ruby jumps on him, ordering him out. 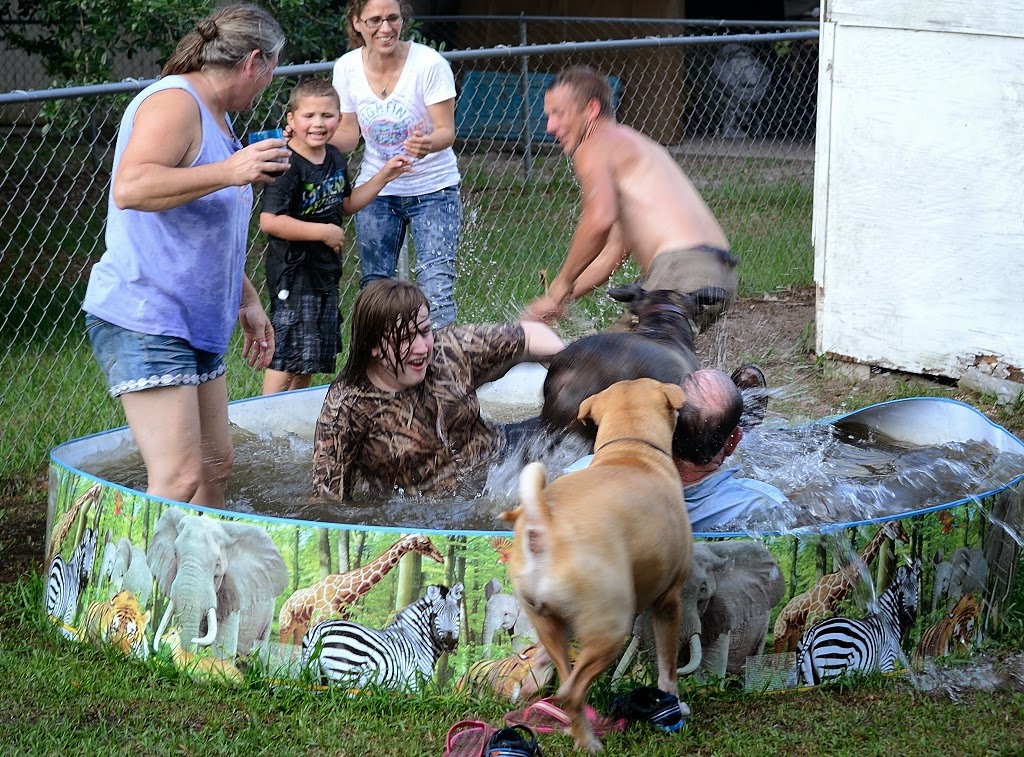 Next tossed in by Frank was Jonathan. 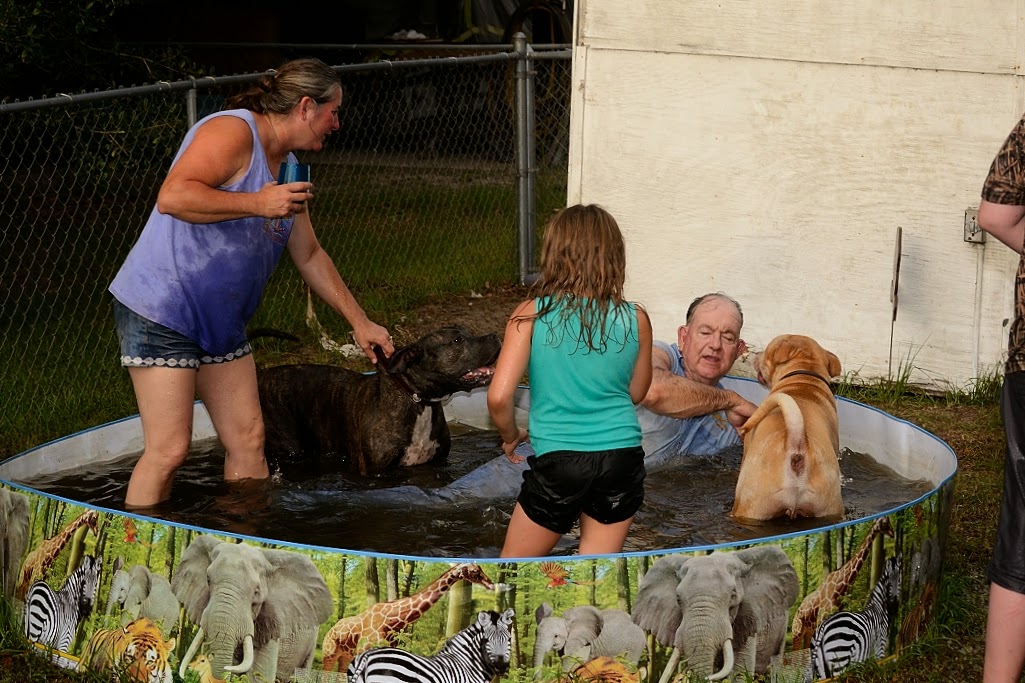 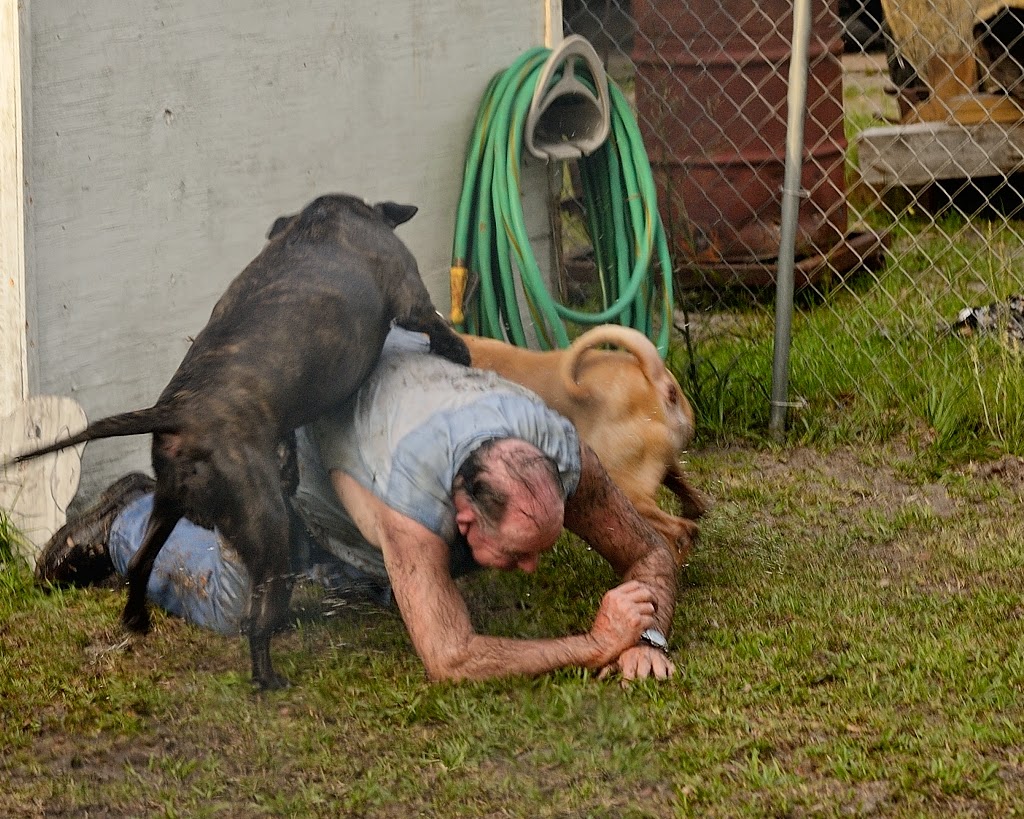 Denny gets out, and Ruby wrestles him to the ground to keep him there. 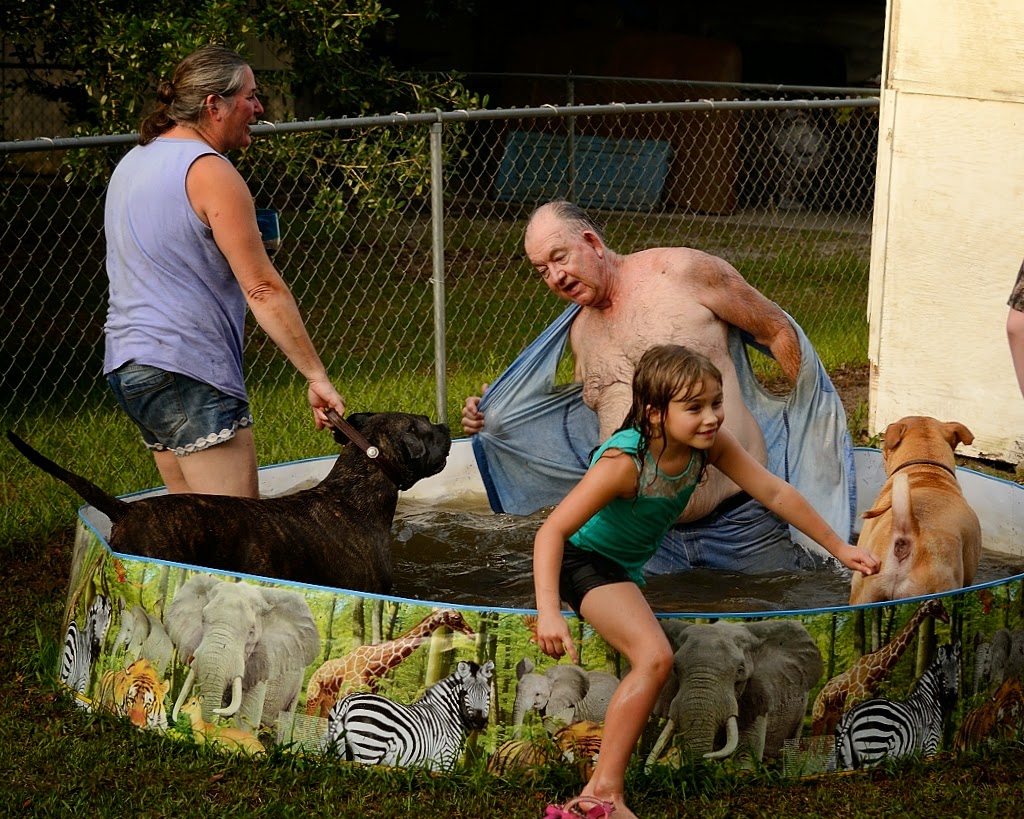 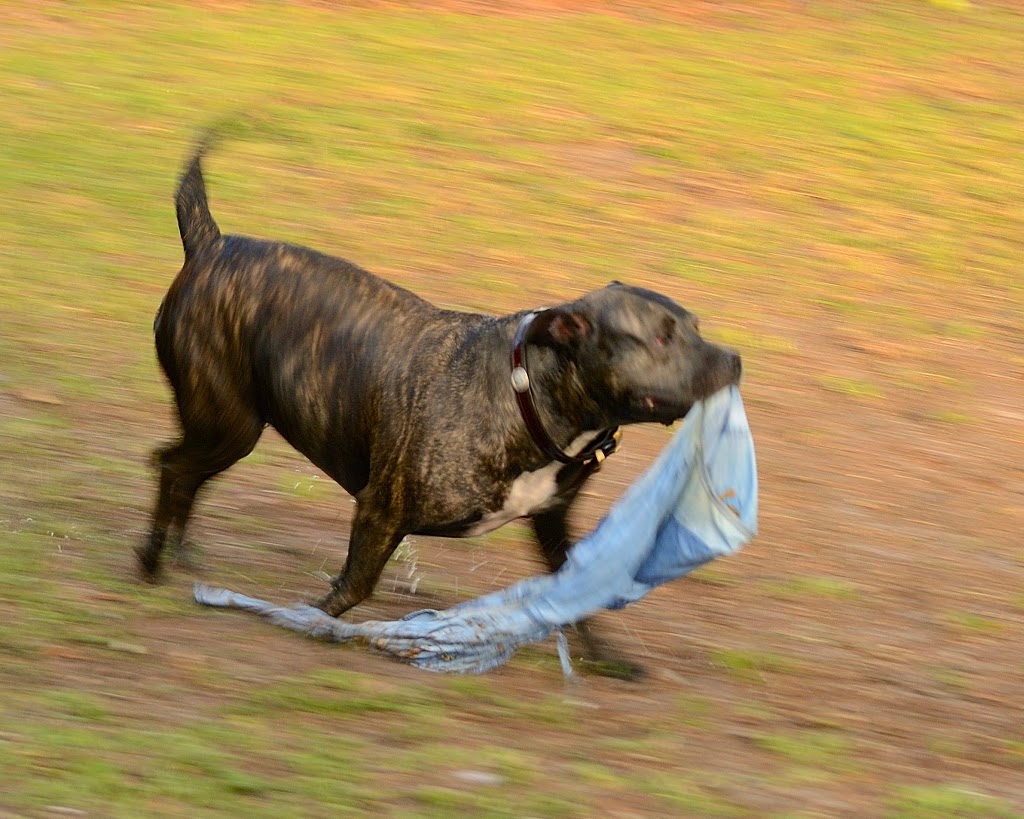 Ruby took the shirt, waving it about as a warning to anyone else foolish enough to mess with her.  No one was to enter the pool.

Ah yes... family get togethers.  A good time was had by all.